A juvenile gang is an anti-social or any criminal act that is evident among children or adolescents. Juvenile delinquency is a legal term referring to how the children and adolescents behave and is viewed by the adults as a crime that needs to be judged under law (Columbia Encyclopedia, 2010). It’s meaning and age limit differs in different countries, with some setting the juvenile’s maximum age limit to be fourteen years while others may be as high as twenty one years.

Don't use plagiarized sources. Get your custom essay on
“ Juvenile Delinquency And Gangs Criminology ”
Get custom paper
NEW! smart matching with writer

In many countries, those people that fall between the ages of sixteen to twenty years are considered as adults, and it is within this age group that the high crime incidence rate is evident.

Some major factors that are attributed to development of bad behaviors are psychological, social and economic factors. Juvenile crime and delinquency are serious problems in the whole world. Extend of effects depends mostly on the social, economic and cultural conditions in every country. Due to difficult times in economy of a country evident by less trade and unemployment, there has been an increase in juvenile criminality.

Poor socio-economic environment that is shaped by poverty and destitution have contributed to poor social background involving violence (Gordon, 2006). The likelihood of becoming a victim of violence is much higher for gang members than it is for members of other peer groups (Gordon, 2006). Most of the criminal cases that are evident among the adults are usually based on their bad behaviors when they were young. A criminal offense that is frequently committed by the children is theft and other bad behaviors like rape and more serious property destruction is usually evident at later age.

There are differential offending patterns among the minority (black) and the white youths. According to Charish, Sebastian & Kelly (2004), the minority youths were much more likely to have prior and chronic histories for delinquency. The Africa American youths were arrested with serious violent crimes than the whites, the report also concluded. The homosexuality have led high incidence of gay and lesbian youths to attempt suicide and involvement in juvenile delinquencies that can eventually lead to self destruction.

Religion is believed to exist to give people a false hope for the future and to keep people motivated during the present. According to Jensen and Rojek (2003), they stated that “social order could be maintained only if people had common beliefs in something greater than themselves”. In addition, religion has made people to be less involved in criminal and fully engage in their social roles and ignoring oppressions of their economic systems. One of the ways through which religion can improve society’s ethical well being is through reducing crime rates. However, this statement will only be justifiable if analysts truly prove that there is significant relationship between religion and crime.

The disorganization in families that can lead to emotional maladjustments plays an important role in arising of many delinquents (Gordon, 2006). In many cities adolescents usually forms a gang in which many young people are involved by acquiring these bad behaviors. After the development of juvenile court, there was an effective judgment among the youthful offenders and the adults. These systems have been campaigning for informal procedure and corrections, a duty that is assigned to psychiatric clinicians, rather than punishment. In early nineteenth century, the juvenile correction centers shave been separated from prisons. Even though these centers are not adequate, they have immensely participated in the development of rehabilitation programs, provision of vocational training and psychiatric treatment. The parole systems, foster homes, child guidance clinics and public juvenile protective agencies have played a great role in correction of delinquent and maladjusted children (Gordon, 2006).

There is a high degree of injustices that are evident in the authority systems. The research have shown that race and gender effects are of great significance for juveniles of which those from rich white families receives government assistance while the poor blacks faces harsher juvenile justice decisions, (Charish, Sebastian & Kelly, 2004). The African American juvenile delinquents were more likely than the white youths to be detained, have their petitions filed and were less likely to be placed on probation at fist intake. The gender effects were also evident in the juvenile system process. It was shown that the females had low chances of being detained, have their petitions filed, transferred to adult courts, high chances of having their petitions filed and were more likely to be placed in custody if they were adjudicated by the juvenile courts.

According to Charish, Sebastian & Kelly (2004), in the American rural cities, the African American youth had greater chances of having their cases being dismissed than among the whites. The Hispanic youths had low chances to have petitions filed on their cases compared to the whites. However, if they were adjudicated they would be more preferably placed in custody than the white youths. African American and Hispanic juvenile delinquents caught with the first offence received greater preference to have their cases dismissed than the whites with their first criminal judges. Those Hispanic youths that were first time criminal offenders and had been adjudicated had high degree to be placed in custody than the whites with same offence.

Violence against gay males and lesbians, of which many of them are young people, has emerged as a significant social problem (Gordon, 2006). Juvenile delinquency holds negative, ambivalent and defensiveness towards homosexuals. Homosexuality is perceived to be a very common moral behavior and it has been known to exist in about fifty percent of the male population. The problems of sexual abuse experienced by these people have led them to engage in violent acts in society. Some other young children runs out of their families to the streets when they are discovered as lesbians or gays and thus ending up as street robbers or gets involved in other criminal acts. Some males involved in homosexuality may go against the society bearing hatred in their hearts and these may lead to development of delinquency with the likelihood of these young people joining youth gang and be incarcerated during their adolescent age (Action Committee against Violence, 2003).

It has been evident that most of the male rapes in our society take place in prison (Gordon, 2006). The existences of homophobia among the homosexuals have resulted in many problems, including high rates of suicidal behavior. A conclusion is based on the fact that, when a society imposes a sense of self-hatred to minority group, they are forced to adapt high rates of suicide, substance abuse, violence and creation of individuals characterized with difficulties in having love relationships. Homosexuals are not criminals and incarceration is not the best way to solve the problems brought by homosexuality. They should be pursued to change through the psychiatric treatment rather than imprisonment. The homosexuals are known to suffer from torture, ill-treatment and violence at the hands of fellow inmates and also prison officials (Gordon, 2006).

The power and influence of religion on delinquency is much more perplexing than the media or acts of community (Jensen & Rojek 2003). Religion being such a controversial, sensitive issue and being viewed from different levels has proved to be difficult to understand its impacts on juvenile delinquency. But in other hand, religion is known to play an important role in influencing the behavior of people, sets values for society and correlates with delinquencies in several ways. Crime and religion have for years going through different studies that seek to explore their relationship. Religion is said to bring social order in society since people would have a common belief on something greater than themselves. Religious involvement throughout adolescents significantly lessens the risk of later adult criminality. In addition religion leads to development of empathy within the youths and this helps to prevent high risk of urban youths from delinquent behavior (Jensen & Rojek 2003). Despite all these, it is evident that there are negative values associated with religion and crime. Religious groups have participated in violent acts in the name of their religious causes. Religious crimes such as the bombing of abortion clinics and the trashing of adult bookstores were all done in regard of strong faith, (Jensen & Rojek 2003). Difference in religious backgrounds between the parent and the child can lead to argumentative issues that increase the risk of delinquencies.

One of the most common factors that contribute to the occurrence of delinquent behaviors among the juveniles is poverty (Jensen & Rojek 2003). Those children that are brought up in poor families are likely to face more economic strain and in trying to obtain their daily needs. The juveniles in jurisdiction who are wealthier are treated less severely by juvenile justice decision makers compared to the poor juveniles. According to Gordon (2006), the studies that were carried out showed that juvenile punishment not only responds to crime, but also to specific community conditions. The development of numerous programs that are meant to lower delinquency rates have led to economic drain since most of them are established of which many do not function effectively. The more efficient programs are those established before occurrence of delinquent behaviors and aims at preventing that behavior. This means that the children’s behavior at early age is detected and any precaution can be taken.

More severe antisocial outcomes are related to early adoption of eloquent behaviors. Children with low intelligent capacity who have poor performance in school face physical abuse from the parents which in turn leads to delinquent outcomes (Alina, 2009). Besides the socioeconomic status, the effects of child rearing practices play a great role in determining the child’s behavior. Those children that are raised by distressed and unsupportive families had higher possibility of developing delinquent behaviors than those from supportive families. The difference in the social status between the urban and rural areas youth have resulted to varied crime rates. Crime rates in urban are higher than in rural because of the occurrence of slums, overcrowded settlements and lack of basic services. Delinquency rates are high in the more economically and technologically advanced countries (Alina, 2009).

Juvenile delinquency is a serious problem all over the world that not only affects the victim of the crime but also juvenile delinquents family, their future and society at large. Juvenile delinquency covers a wide range of violations of legal and social norms ranging from smaller to severe crimes committed by minors. Young people living in harsh situations like poverty, dysfunctional families, substance abuse and death of family members are at a risk of becoming delinquent. The occurrence of juvenile delinquency is roundly attributed to both biological and social effects. The Child’s behavior is based on existence of more abstract context of socialization. The major prominent forces that are sources of delinquency are the media, community and religion. The minority youth group are highly involved in crime and receives harsher juvenile justice system treatment than white youths. Racial disparity exists in the absence of differential treatment. More studies have shown occurrence of discrepancies in law enforcement’s treatment of minority group. In order to get rid of delinquent children in the society, the community should actively involve themselves in providing essential services for the well being of their children. 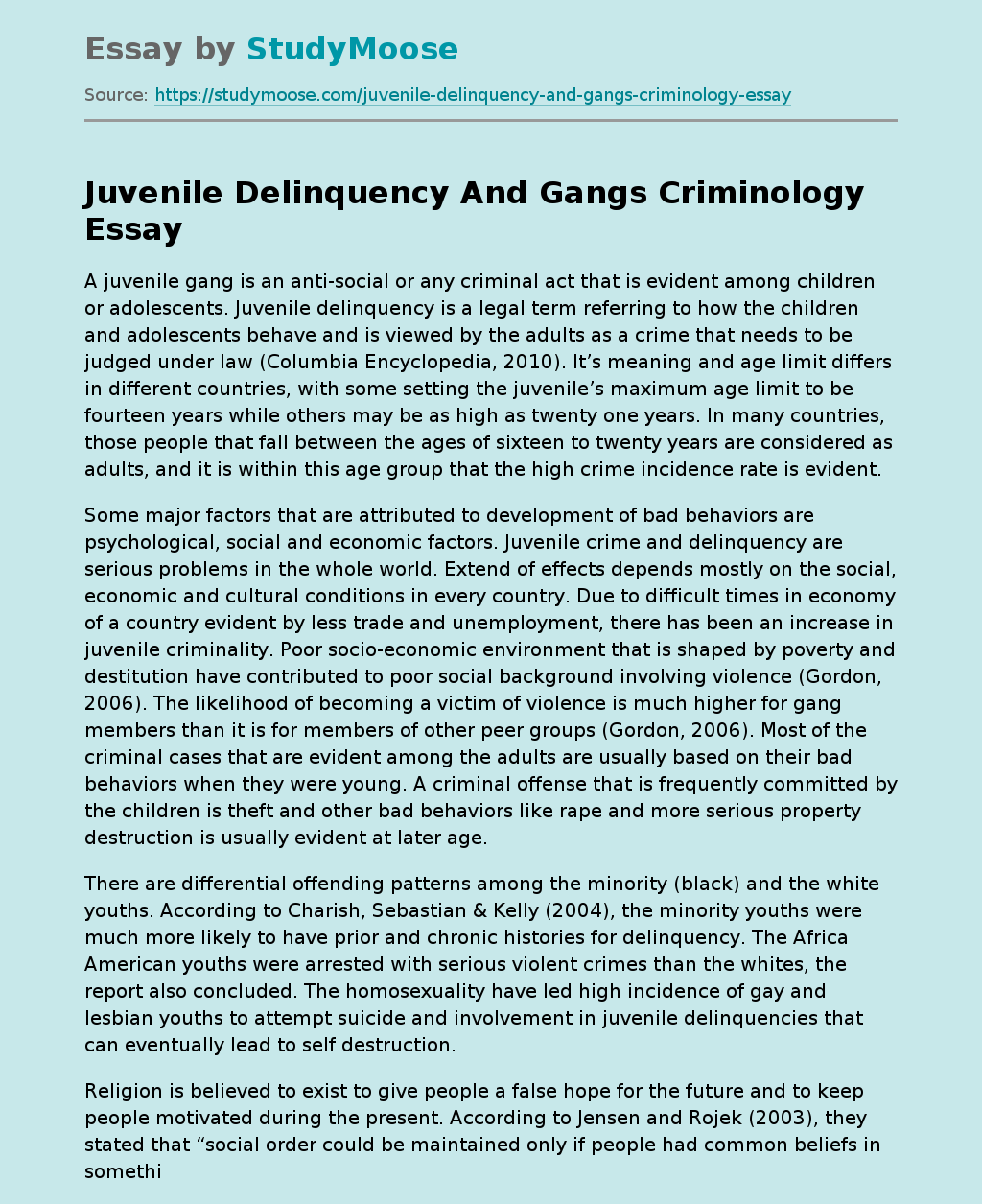