The Factors of Social Problems of Juvenile Delinquency

To begin with, I would like to state that every social problem has a deep root and the situation we usually see – is just the tip of an iceberg. Juvenile delinquency could be a prime example of this theory, as the causes of this phenomenon are too significant to avoid discussing and looking for the remedies is of great importance.

The first and foremost factor – is modelling and negative parenting which lead to the criminal antisocial behavior of the adolescents. Indeed, the role of bringing up in the genesis of the youth violence is critical.

Don't use plagiarized sources. Get your custom essay on
“ The Factors of Social Problems of Juvenile Delinquency ”
Get custom paper
NEW! smart matching with writer

Whether children want it or not, they look at their families as the role model, which later influences the whole life. Obviously, that in families where harsh words are frequent and kisses are rare – chance of the youngsters becoming aggressive and violent is extremely high. Furthermore, many young people who are violent have been raised in homes that have been abusive, hostile and conflict ridden. Others were brought up in neglecting parents who believed that it was normal to for children to be allowed to run wild, without control or supervision.

Consequently, disengaging of parents from their responsibilities lead to children`s desire to be approved and respected by their peers or people who could try to use them. Credence Barebone – one of the antagonists of the movie “Fantastic Beast” exemplifies this issue. His timid personality also made him susceptible to manipulation by the dark wizard Gellert Grindelwald, who took a personal interest in him. Although Credence didn`t relish for hate – he was made to resort to violence and hastened his plunge toward the abyss.

In other words, peer pressure is truly among the most dangerous factors leading to juvenile delinquency. A large proportion of violent acts committed by adolescents are committed within the context of peer pressure. Many adolescents will do risky, dangerous, or illegal things when in the company of their peers that they would not do when on their own. Rebelliousness, desire to be treated as the adults and the loss of faith in the surrounding grown-up world encourage more violence and result in juvenile delinquency.

I would also like to focus attention on biological factors and mental health disorders as they linked to violent crime and anti-social behavior. It is likely that poor prenatal care, exposure to drugs and alcohol, and early abuse or neglect can alter brain development in ways that lead some children to have more difficulty controlling aggressive impulses. Moreover, children with serious mental health problems, including conduct disorder, depression, post-traumatic stress disorder, substance abuse problems, and anxiety disorders are prone to criminal behavior.

After all, it is rather complicated task to find remedies to all the problems, but anyway, creating social conditions in which young people will find themselves, realize their potential will be a major step toward solving the problem. Besides, children should have a sense of being valued and approved and it is a task for both parents and schools. Teaching children to take the responsibility for their actions, consider for others has to be a part of the early school program. Governments need to spend more on welfare benefits and create employment, so both parents and children feel that they are part of society and can contribute toward it and benefit from it.

To sum up, juvenile delinquency is a result of various factors and if nothing is done against the reasons of it – the criminal rates will be constantly growing.

The Factors of Social Problems of Juvenile Delinquency. (2019, Aug 19). Retrieved from https://studymoose.com/the-factors-of-social-problems-of-juvenile-delinquency-essay 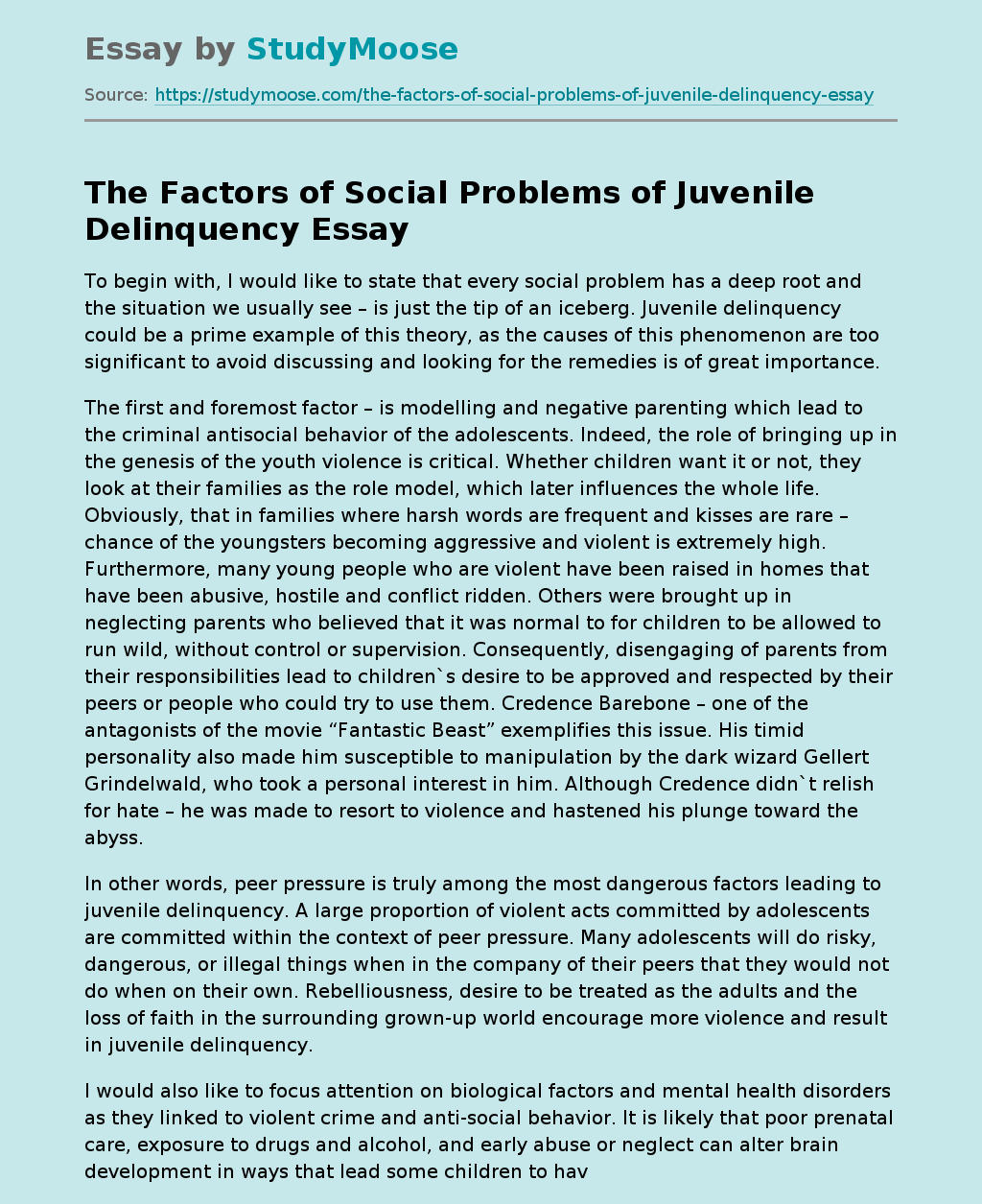