A Review of Literature on Juvenile Delinquency

Depression and delinquency covariation in an accelerated longitudinal sample of adolescents. The most common co-occurring mental health disorder for juveniles is depression and delinquent behaviors. Juvenile depression symptoms were used to predict patterns of age related changes in delinquency. Juveniles especially females who display depressive symptoms are at greater risk of developing and or partaking in delinquent behaviors. Approximately 76% of cases brought to the juvenile courts in the United States of America are adjudicated delinquent. In the United State of America approximately 1,660,700 juveniles are adjudicated delinquent in 2004.

Don't use plagiarized sources. Get your custom essay on
“ A Review of Literature on Juvenile Delinquency ”
Get custom paper
NEW! smart matching with writer

Between 40 and 60 percent of juveniles are maltreated.

5-10% of juveniles that have been diagnoses with depression have been found to be six times more likely to commit a delinquent act. 63% of the juveniles have experienced maltreatment in some way. ADHD has not been proven to cause juvenile delinquency.

Juveniles that are delinquent have been found to have some type of childhood depression. These juveniles have serious mental help issues.

Article: Predicting juvenile delinquency: The nexus of childhood maltreatment, depression and bipolar disorder There is a connection between juveniles with mental health disorders and delinquent behavior.

A juvenile diagnosed with depression or bipolar is more likely to commit delinquent behavior. Professional adults who notice symptoms of depression, bipolar, and maltreatment in juveniles and then work with them in some cases can prevent the delinquent behavior. Top two main issues with juveniles are behavior and depression. Female have a higher increase with chances symptoms between the ages of 11-15. As aging happens males tend to have an increase of delinquency and females an increase of depression.

Depression is a risk factor for juveniles that can increase delinquent behavior.

Delinquent adolescents with mental health problems can suffer from the two most common issues depression and delinquent behavior/conduct. Genetic factors therefore account for approximately 35% of the relation between depressive and delinquency symptoms, but do not inform the temporal ordering of symptom presentation or the potential for using symptoms of one syndrome to predict future symptoms of the other. Specifically, males have the higher rate of reported delinquent behavior in comparison to females. Depression play a huge role in the possible purpose of juveniles becoming delinquent, when the juvenile(s) began to act disruptive on a routine then an evaluation and intervention should be considered.

Ethnicity can play a role in the aggressiveness of juveniles/adults. Males have aggressive behavior which puts them a high risk for behavior problems, drug use, and delinquent behavior if not addressed. It is reported that there is a higher rate of males using substance from a two parent home, and a lower rate of males coming from a single-parent home. Article: Recidivism in subgroups of serious juvenile offenders: There are four different subgroups of juveniles that were looked at: Property offenders, sex offenders, serious violent offenders, and violent property offenders. Violent property offenders had the highest number of risk factors Recidivism of juveniles was looked at differently due to the low amount of recidivism there is in individuals who commit these crimes. Approximately 2.3 juveniles that are arrested are under the age of 18. 30-50% of juvenile offenders has a recorded disability and is at a higher chance of special education disability.

Special education disability / socioeconomic status / criminality in family / and foster care are higher chance of being chronic offenders in juveniles. Arrest before 14 years are less likely to become adult offenders later in life. The experience of being in a foster care increases the change of delinquency than a juvenile with no family felony. If the juvenile has a family history of criminal behavior the possibly is high that the juvenile will also carry the same behavior. Juvenile that is an offender tends to have more of a special education disability in comparison to someone who is not an offender. It is believed that socioeconomic status could be related to the juvenile offending.

A number of juveniles displaying delinquent behaviors is incredibly high. As of 2001 the amount of individuals under the age of 18 arrested for violent crimes was approximately 2.3 million (Alltucker, Bullis, Close, & Yovanoff, 2006). What role does the environment play in the later juvenile delinquency, and can delinquency be prevented? This paper explores that question using three different themes. First, the various types of abuse and the effect on delinquency are discussed. Second, the link between depression and delinquency is examined. Finally, the importance of recognizing and preventing juvenile delinquency is addressed.

In the United States there are approximately one million children per year are reportedly victims of child abuse. While there is a connection between physical abuse and later violent acts, the article by Yun, Ball, & Lim (2011), contends that sexual abuse and emotional neglect are more significant in predicting future violent and criminal behavior than physical abuse alone. Alltucker, et., al (2006) agree that sexual, physical, and emotional abuse all contribute to some form of delinquent behaviors in juveniles. The article by Mallet, Stoddard Dare, & Seck (2009) indicates that between 40 and 60 percent of sentenced delinquents have been abused or neglected in some form. However, victims of sexual abuse are not likely to become delinquent. It is clear from the literature that maltreatment of children in general has a negative effect on their development, but there is inconsistency in the research as to which form of abuse plays the most important role in delinquency.

Due to research increasing public awareness, symptoms of depression and other mental health issues are being noticed at a younger age. Young people displaying symptoms of depression are likely to experience academic problems as well as substance abuse issues. These are a few behaviors considered as delinquent. Depressed adolescents may express their frustrations through behaving aggressively and breaking the rules in their home environment. Consequently these behaviors cause conflict with parents or guardians and can eventually lead to involvement in delinquent acts. (Kofler, et al., 2011). Mallet, et al (2006) reported between 40 and 70 percent of incarcerated juvenile offenders suffered from emotional and behavioral problems prior to arrest.

In fact, compared to general offenders, 46 percent of juvenile offenders are reported as having shown signs of depression or other emotional difficulties (Alltucker, et al., 2006). Symptoms of depression and delinquency covary and diagnoses co-occur often enough that it cannot be contributed to chance. Over 30 percent of young people meeting the criteria for depressive disorder also meet criteria for a conduct disorder. In addition, over 50 percent of adolescents diagnosed with conduct disorder also exhibit the symptoms that meet criteria for depression (Kofler, et al., 2006).

Being able to recognize who is at risk of delinquent behavior is the first step towards prevention. Identifying risk factors in children is imperative in preventing juveniles from becoming involved in the criminal justice system. Also, it enables practitioners and therapists to notice which children are most at risk and what type of measures are necessary in preventing delinquency (Mallet, et al., 2006). Intervening before the juvenile reaches the age of adulthood and becomes a chronic criminal is a major goal in place to protect the rest of society. One of the predictors of being a lifetime offender is what age the juvenile is upon his or her first arrest. In 2001, the amount of people arrested for violent crimes were under the age of 18 (Alltucker, et al., 2006). A review of an article by O’Donnell, Hawkins, & Abbott (1995) states there can be an early onset of aggression in children between the ages of 8-10. Aggression at this age puts the child at higher risk of severe juvenile delinquency and also antisocial behavior in adulthood.

Upon reviewing the literature it is apparent that abuse, neglect, and mental health problems all play a role in juveniles becoming delinquent. Current research on this pressing and difficult issue is only a small portion of a vast range of theories about delinquency. Delinquency in juveniles is a dynamic, multifaceted problem with numerous potentially causal factors.

A Review of Literature on Juvenile Delinquency. (2016, May 23). Retrieved from https://studymoose.com/a-review-of-literature-on-juvenile-delinquency-essay 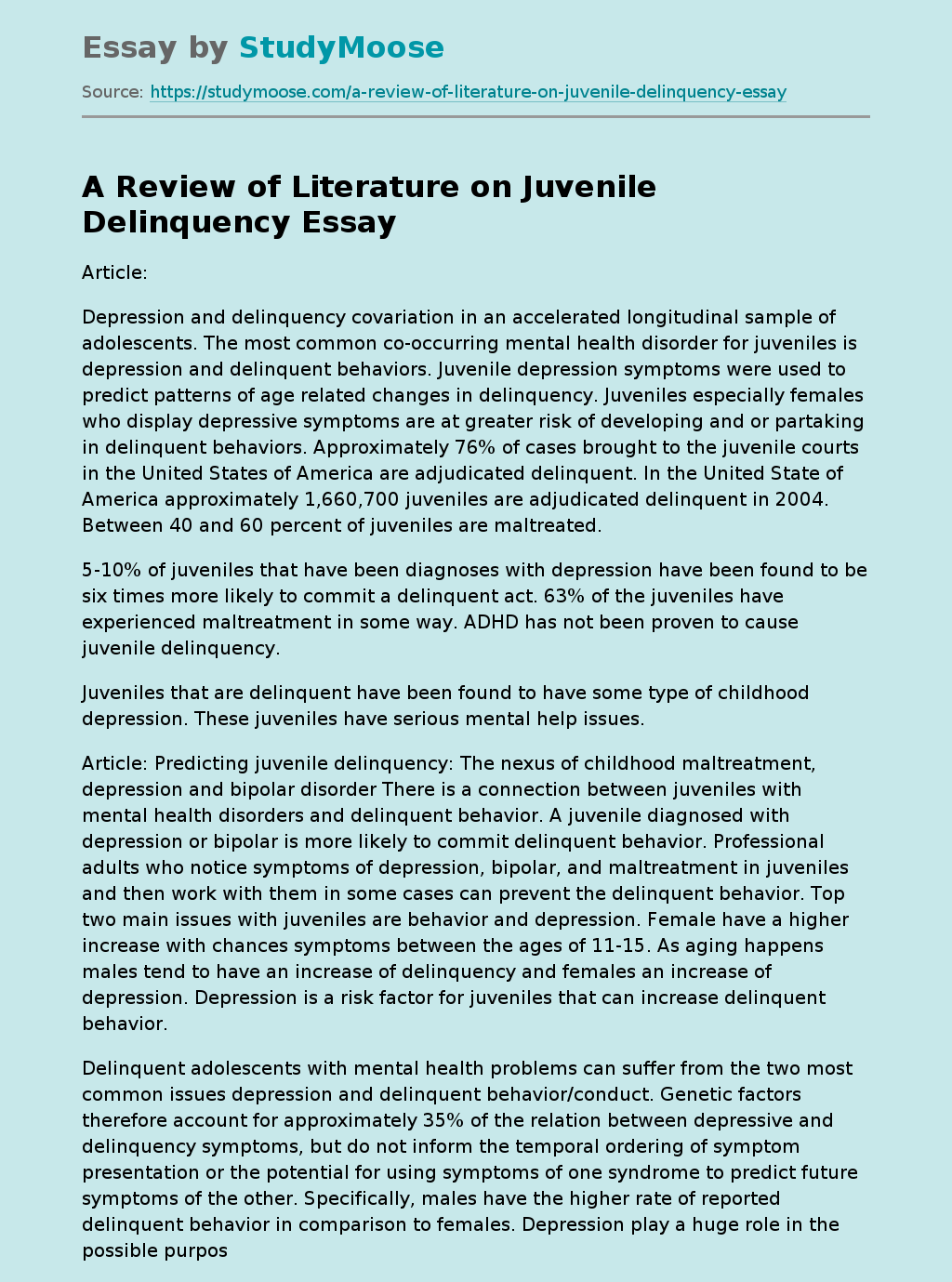