Don't use plagiarized sources. Get your custom essay on
“ The Four Corner Hustlers ”
Get custom paper
NEW! smart matching with writer

Lead by Monroe “Money” Banks, this group adopted the Black Diamond as a symbolic reference to their gang. In the late 1980’s, Freddy Gauge died while incarcerated. Walter Wheat then took over the organizations operations solely. In the early 1990’s, Monroe Banks proclaimed leadership over the entire organization but this was disputed by older high-ranking members of the gang. The tension and disagreements within the gang lead Walter Wheat to retire from the organizations leadership.

Monroe Banks was later killed in a drug related murder in 1992.

The 4CH’s began to expand their bases of operation throughout the 1990’s, growing substantially in number. A group of younger Four Corner Hustlers began to distance themselves from the Vice Lords and even rest away some of their territory, often times “flipping” Vice Lord members with the lure of drug spots. These Four Corner Hustlers charged a 50 percent tax on profit for the selling of narcotics as opposed to the traditional 75 percent.

Many of these Four Corner Hustlers, whose main base of operation was in Austin and Garfield Park neighborhoods used the Black Diamond. Amongst the “Young Turks” was Angelo Roberts.

He even made America’s Most Wanted as authorities pursued him across the United States. Angelo Roberts was killed in 1995, his body found frozen stiff in the trunk of a car. Several sets still pay homage to Angelo Roberts, adopting the moniker “Angelo 4’s”. Ray Longstreet assumed leadership of the official branch of Four Corner Hustler around the time of Angelo Roberts death. His group still considers themselves a faction of the Vice Lords street gang, especially while in the correctional facilities. Ray Longstreet was recently released from prison in 2004 after serving a stint for drug charges.

He was recently arrested again, this time by Federal authorities in “Operartion Street Sweeper”. The Four Corner Hustlers pride themselves in making money. The organization has grown tremendously within the last ten years or so, and have expanded throughout the Southside and far South suburbs. The 4CH’s are an off-shoot of the Vice Lords, however, on the street most members consider themselves a separate entity. Most Four Corner Hustlers now consider themselves a separate Nation and often show their independence with the adoption of the Black Diamond symbol, while other 4CH’s who still retain ties to the Vice Lords using the 5 point Star.

However, all 4CH’s align themselves with the Vice Lords while incarcerated forgoing any “street antimosity”. The gangs primary criminal involvement has consisted of graffiti, drug trafficking, assault, armed robbery, extortion, kidnapping, shootings, murder, and the “renting out” of drug turf to independent dealers. The organization has also been known to engage in the overseeing of solicitation of prostitution (pimping), the selling of illegal firearms, and the opening of “front” businesses to launder money. 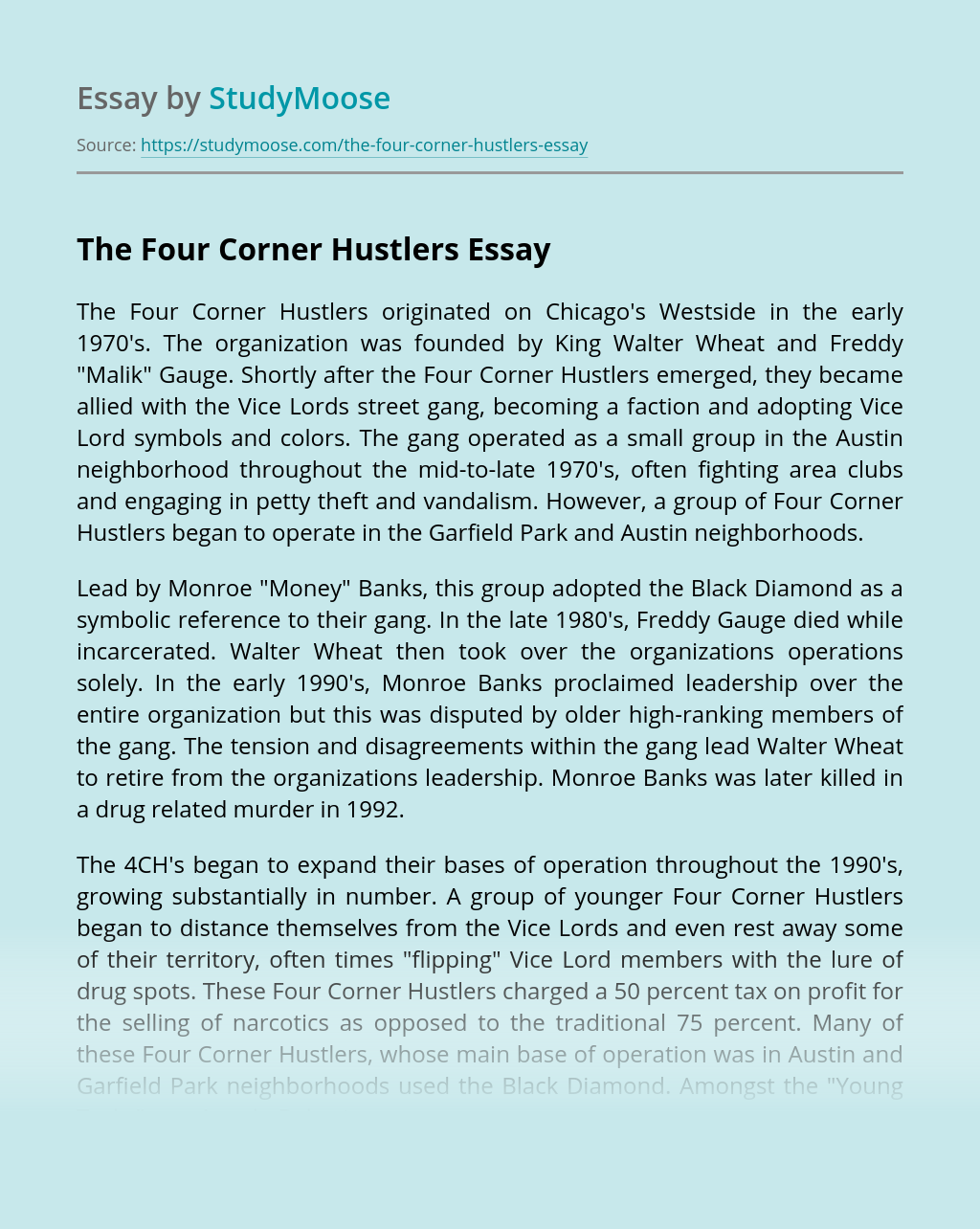