Artists are always acclaimed for the works that they produce; however, there are other professions, such as doctors, mechanics, engineers how contribute greatly to the world we live in. The Engineer’s corner is a satirical piece which emphasizes on how life as an artist is overrated, as well as recognizing the underestimation of other professions that lend more to society and its development, such as the Engineer. Cope effectively uses tools of irony, rhetoric, tone as well as rhyme to convey this message.

Don’t waste time
Get a verified expert to help you with Critical commentary on engineers corner by Wendy cope
Hire verified expert
$35.80 for a 2-page paper

The use of irony and rhetoric in the poem really builds on the mockery that Cope uses to emphasis the great undermining of the Engineer- representation of other working class jobs in the poem. Cope constructs a parallel world where it is the engineer who is ‘sure to need another job’ and that they would have to ‘burn the midnight oil to earn a crust’, and that little boys would prefer poems to ‘the bike… and the train’.

The reader recognizes that Cope has switched the lifestyles of these two professions, and through this effective use of irony, the reader is able to feel the sharp bite of Cope’s sarcasm.

This is effective as it truly exemplifies the differences of the life of the poet against an established engineer, clearly identifying the Engineer, the representation of the working class, as successful in society. The true irony of the poem, however, is the fact that Cope herself is a poet, and therefore is almost criticizing her own work.

This sarcasm is further emphasized through Cope’s use of rhetorical questions, such as ‘Who needs a bridge or dam? ’. The answers to the questions that she asks are so glaringly obvious to the reader, which makes it clear that the role of an engineer is so important.

Moreover, the obvious nature of the rhetorical questions furthers Cope’s sardonic tone, making clear to the reader on how she feels about the exaggeration of poets’ importance. The overstatement of poets’ lives is seen through the diction as well hyperbole of their importance, which demonstrates to the reader how Cope finds a poet’s exultation ridiculous. The poem begins with recognizing that England makes ‘more fuss of ballads than of blueprints’, the words here are plosives that are hard hitting, and as the first line in the poem, it adds to the sarcasm and snappy tone of the poem.

Furthermore, there is the repetition of the words ‘everybody’ and ‘with no hope’, where the added emphasis is mocking the idea that we all ‘need poems’ and that ‘everybody reads them every day’. The word ‘every’ for example is drawn out and lengthened, adding to the sarcasm of the importance of poems in life. Different literary devices contribute the poem’s satirical nature. Through the construction of the poem, devices such as rhyme, punctuation as well as syntax contributes to the crippling sarcastic tone. Hard-hitting words are used in the rhyme scheme such as ‘rich’ and ‘ditch’, which contribute to the harsh tone and mood of this poem.

This is further emphasized by the short sharp sentences Cope uses to add to the biting flair of the poem, lines such as ‘It must be hell’, carry so much power that this emphasis strengthens the sarcasm of the poem. Moreover, the pauses in the poem highlight the mordant words of the poet, leaving the reader to completely understand Cope’s attitude. The last two lines of the poem in particular are most powerful, as this is where Cope abandon’s her sarcasm to end in a powerful harsh criticism of British society, that the ‘country’s going down the drain’.

The dramatic change in tone at the very end of the poem serves to clarify the poem’s intention; to ridicule the ‘far too much encouragement for poets’ over the working man. Thus, Cope manages to completely explore her scathing opinion through an intelligent satire, allowing the reader to use their own insight to understand how she perceives the ridiculous nature in which poets are treated in England over the hard working and vital Engineer. 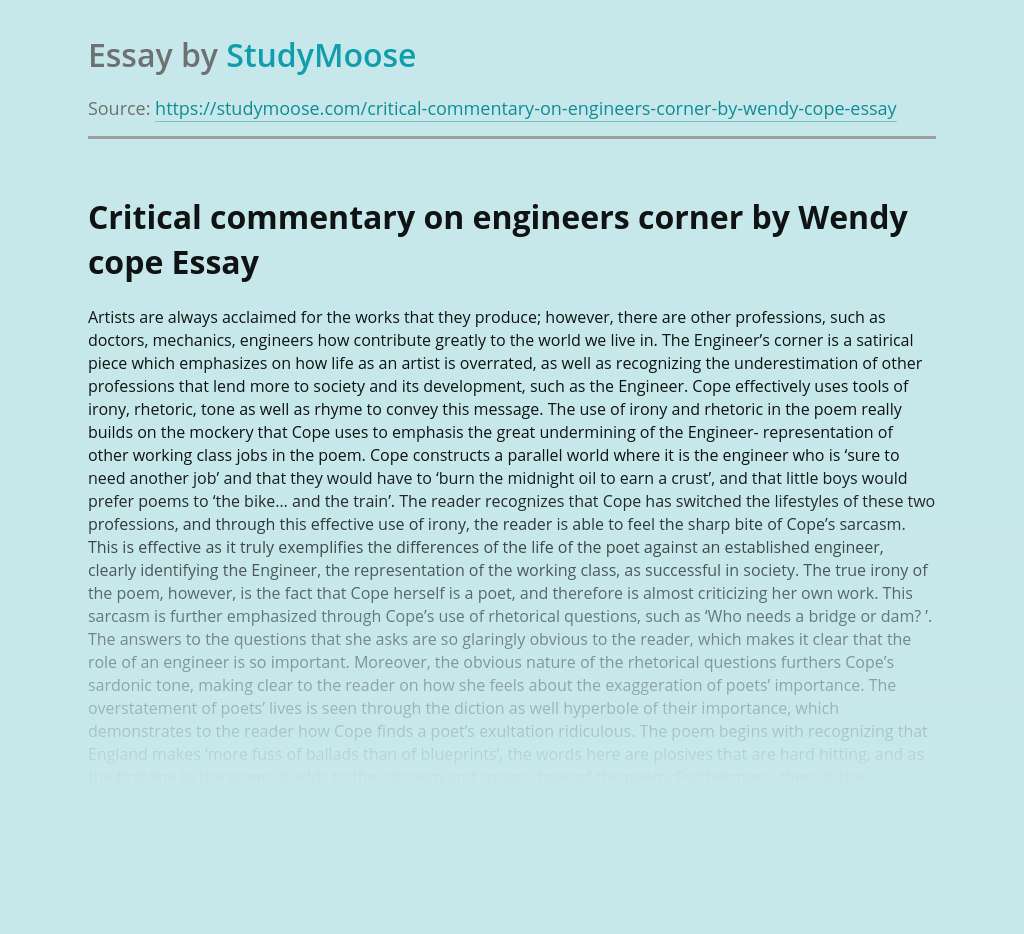 Don’t waste time
Get a verified expert to help you with Critical commentary on engineers corner by Wendy cope
Hire verified expert
$35.80 for a 2-page paper
Stay Safe, Stay Original