This case study presents a clear example of the two simultaneous challenges of entering the global market with a well established brand and culture. The first challenge, and one that might seem obvious, is that of understanding the culture with which you hope to create a successful partnership of sorts, and the second challenge is that of understanding the traits, characteristics, strengths and weaknesses of your own brand or corporate culture, and how you may need to adapt it.

The case study discusses how the Four Seasons Hotels and Resorts had decided to operate a luxury hotel in Paris, France.

Don't use plagiarized sources. Get your custom essay on
“ Four Season Goes to Paris ”
Get custom paper
NEW! smart matching with writer

The Four Seasons strong brand and excellent reputation certainly had proven to be a competitive advantage nearly all of their global locations, and to an outsider it would seem that a move to Paris would be rather seamless. Four seasons not only had the reputation, but they also had a record of strong financial performance. Four Seasons revenue per room was 32% higher than their US competitors.

Four Seasons had, as part of their culture, adherence to the “golden rule” which was to “treat others as you wish to be treated.” However, the Four Seasons also understood that implementing the golden rule means understanding how others actually want to be treated.

Some of the key challenges the Four Seasons faced included navigating the French Labor laws, understanding managerial accountability, the differing perceptions of time, the French tendency toward “emotional swings” and the “de-demonizing” of the United States. The last challenge grew out of the spectacular failure of Disney to understand French culture when they opened EuroDisney.

The Four Seasons is actually a Canadian based company but they were aware of that not everyone knew that, nor could they be convinced that there existed any notable difference.

In a time when corporate Visions and value statements are debated in regard to whether they are effective, or even genuine, a statement by Executive Vice President, John Young addressing cultural transformation may sum up ideology behind their success not only in Paris, but in other locations as well. Young states, “If we can achieve a critical mass of individual among the workforce committed to doing things differently, to meeting our standards, that critical mass overcomes the resistance of what becomes a diminishing old guard.” While understanding that cultural transformation is delicate, Young understood that it is possible to overcome the challenges, and to indeed implement your own successful brand and culture, by following a few simple steps.

The Four Season’s may not have had the GLOBE project’s “Common Cultural Dimensions” in their toolkit at the time of their entrance into France, but they demonstrated an understanding of those dimensions that were evident to the French. In the GLOBE project’s Dimensions, they identify “Performance Orientation” and “Assertiveness” as two dimensions associated with American cultural. Even though the Four Seasons is a Canadian company, for our purposes here we will lump them together into the North American category. These two Dimensions would appear to be in direct contrast to the Dimension most associated with the French, that of “Power Distance.”

Power Distance is defined as “the degree to which members of a collective expect power to be distributed equally.” This is manifested in not only the labor laws, but also in the expectations, even habits of the French employees. The Four Seasons implemented a program called the “direct line” where the general manager met with employee groups of 30 to communicate concerns so that they could be immediately addressed, with results reported back to the group. In these groups, the employees met separately from the supervisors because the French employees were not accustomed to speaking up in front of supervisors. This is in contrast to a common practice in North American companies where such communication has been credited for changing culture in large organizations.

While not mentioned specifically in the Four Seasons article, or in the GLOBE project, it is clear that the French also exhibit characteristics of the In-Group Collectivism dimension. This dimension is defined as “the degree to which individuals express pride, loyalty and cohesiveness in their organizations.” The case study provides numerous examples of the “French pride.” The Four Seasons team had to contend with the “emotional way of doing things,” which is said to be a result of this French pride. In an organization where service is key not only to success, but to the very culture, the Four Seasons had to contend with the idea that the French ready to serve, when appropriately asked. To “give service” was an honor, but to be “in the service of…” was degrading.

The Four Seasons then, established that they understood both their own corporate culture and the culture of the French. We have no evidence that they studied the GLOBE project but they clearly managed the differences in the Cultural Dimensions where they differed. As our class presentation suggested, it is equally important to understand the similarities of culture as it is the differences. The quote by John Young indicates that he was not seeking to change the Four Seasons to fit the French, rather, he looks for similarities, and builds on them.

In response to the question, “can anyone develop global leadership capabilities?” the answer is clearly, yes. Striving to be what Peter Senge would call a “Learning Organization” is a good start. The Four Seasons shows in this case study that organizations who understand their own culture, that put the time and effort into learning about new cultures, and who find ways to merge the two will be successful in their global leadership capabilities. The “learning” part is in knowing that the objective is never fully met. The Four Seasons first quality review showed that despite their efforts, there was room for a great deal of improvement. But with more effort, and more learning, they demonstrated in their second and third reviews that their endeavors were paying off. 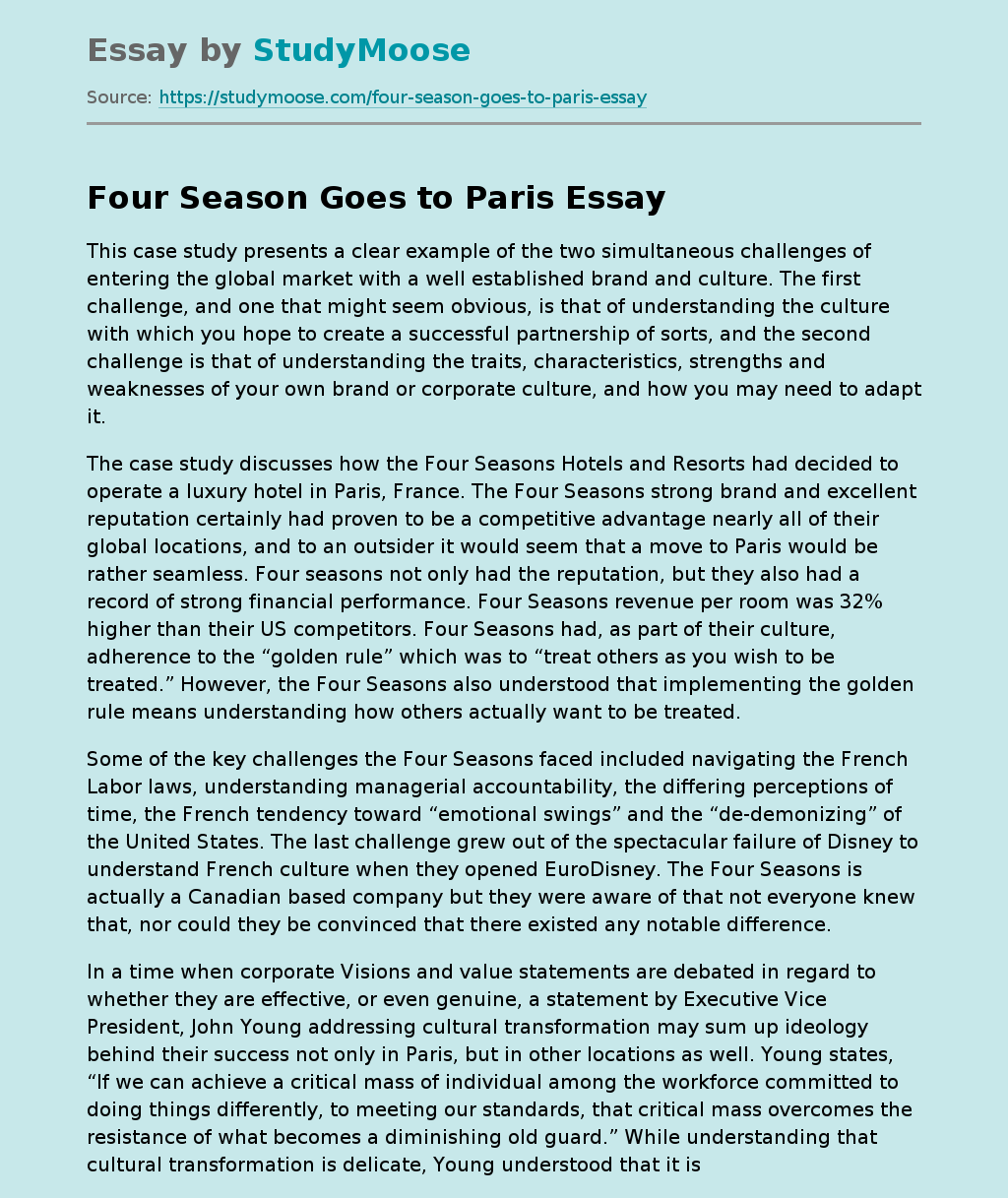