Effects of dry season burns on soil properties and the implications

Don't use plagiarized sources. Get your custom essay on
“ Effects of dry season burns on soil properties and the implications ”
Get custom paper
NEW! smart matching with writer

Satellite images and ground truthing confirm a pattern of burning from January to April in West Africa and from July to October in the East and parts of Southern Africa ( Kugbe et al. 2012; N’Datchoh et al., 2015; Tarimo et al. 2015; Knowles et al. 2016; Archibald 2016; Dwomoh & Wimberly 2017). The authors highlight the extensive and frequent use of fire in the African savanna: this is why Africa is referred to as the ‘fire continent’ (Knowles et al.

Through the combustion of biomass, soil properties are altered and different soils are influenced differently. While some nutrients, such as nitrogen (N) and phosphorous (P), are volatilized and lost, calcium (Ca) is made more available (St. John & Rundel 1977). Fire is thus a rapid mineralising agent, in contrast to natural processes, which may require years, or in some cases, decades, for decomposition to occur ( Nardoto & Bustamante 2003; Certini 2005; Pivello et al. 2010; Hanan et al. 2017). Additionally, the removal of vegetation cover during burning exposes the land to various forms of degradation, including erosion, leaching and reduction in soil porosity (Ferriera et al 2008). Slow infiltration and percolation in soils have also been attributed to the burning of vegetation, which leads to high runoff resulting in the topsoil being washed away (Bird et al. 1999; Kato & Haridasan 2002). The changes in soil composition and processes are, however, dependant on the fire regime (season, frequency, intensity, time, size and pattern, of fire) (Keeley 2009).

The study of fire effects on soils in fire-adapted Sudano-Guinean savannas (which cover approximately 1.3 million km-2 (35%) of the total West African region) is therefore important. There are a number of studies (Andersson et al 2003; Sackey & Hale, 2009; Dayamba et al. 2010; N’Datchoh et al. 2015; Cardoso et al. 2016; Amoako et al. 2018) on how biomass burning influences vegetation in these savannas, but very few studies have been done on soils, and how the multipurpose uses of fire influence fire occurrences. Kugbe et al. (2012, 2014) investigated seasonal burns and the impact of nutrient loss, whilst N’Datchoh et al. (2015) studied the interaction between climate-related and anthropogenic fire regimes. Bagamsah (2005) investigated the impact of a seasonal burn on both vegetation and soil in the Northern Region of Ghana. Pyne (2003) authored an essay on the use of fire in agriculture, and the names attributed to the the various occassions that fire is used within the cropping season in the Southern part of Ghana. Pyne (2003) also proposed ways of protecting forest reserves from wildfires in Ghana.

The few studies conducted on savanna fires in Ghana have indicated that biomass burning, particularly in the dry season, has been a trend in the Northern Region of Ghana for decades, with records dating back to colonial times (Brookman-Amissah et al. 1980; Korem 1985; Pyne 1999; Amanor, 2002; Andersson et al. 2003; Bagamsah 2005; Kugbe et al. 2012; Kugbe et al. 2014). The studies argue that bushfires are due to the uncontrolled use of fire for hunting, charcoal production, and crop production (pre-cropping and post-harvest), as most farmers in the north of Ghana use fire for land preparation for cropping. Alhassan et al. (1999) also reported that fires frequently occur in areas with large populations of game and livestock and indicated that the effect of fire on natural pastures and parklands in the savanna is enormous.

In this paper, we assessed the effects of fire on soils in four land use types – burned and unburned crop fields and woodlands. We also discuss some implications of fire frequencies for the study districts and communities. Thus data presented here answers the questions:

The study was conducted in the Northern Region of Ghana (9.5439° N, 0.9057° W) with a population density of 35 persons / km-2 (Ghana Statistical Service 2012). The region has an average altitude of 150 m above sea level with an undulating topography. Geologically, the soils are Voltaian sandstone characterised by inherently low organic matter content and are prone to erosion (Vanlauwe et al. 2002; Braimoh & Vlek 2004). The soils are locally characterised as savanna Ochrosols (Obeng 1956) ranging from black, alluvial soils and brown, salty soils, to stony/gravelly soils and are classified as Luvisols and Fluvisols in the World Reference Base for Soil Resources (Mikkelsen & Langohr, 2004).

The climate is tropical with long dry spells between November and April. The region has a unimodal rainfall distribution with an annual mean of 1 100 mm. The peak of the rainy season ranges from July to September. Thus, the region has only one cropping season, as opposed to two cropping seasons as found in the south of Ghana. Rainfall exceeds potential evaporation which occurs over a relatively short period (Kranjac-Berisavljevic et al. 1999; Boubacar et al. 2005).

The mean annual temperature is 27oC. The annual potential open-water evaporation in the north is comparatively higher (about 2 000 mm) than the south, which records 1 350 mm. The region has a dry climate due to its proximity to the Sahel and experiences north-easterly winds (Harmattan) between November and April which facilitates vegetation burning( Kranjac-Berisavljevic et al. 1999; Boubacar et al. 2005).

The region occupies about 62% (147 900 km-2) of the Guinea savanna ecological zone of Ghana (Raamsdonk et al. 2008). It is characterised by fire- and drought-resistant woody species such as Vitellaria paradoxa, Combretum spp, Burkea africana, and Isoberlinia doka with common grasses such as Andropogon, Heteropogon and Hyparrhenia spp. A third of natural pastures (71% of 235 000 km-2) in the country fall within this region (FAO/UNEP 1981; Raamsdonk et al. 2008)

Effects of dry season burns on soil properties and the implications. (2019, Dec 18). Retrieved from https://studymoose.com/effects-of-dry-season-burns-on-soil-properties-and-the-implications-example-essay 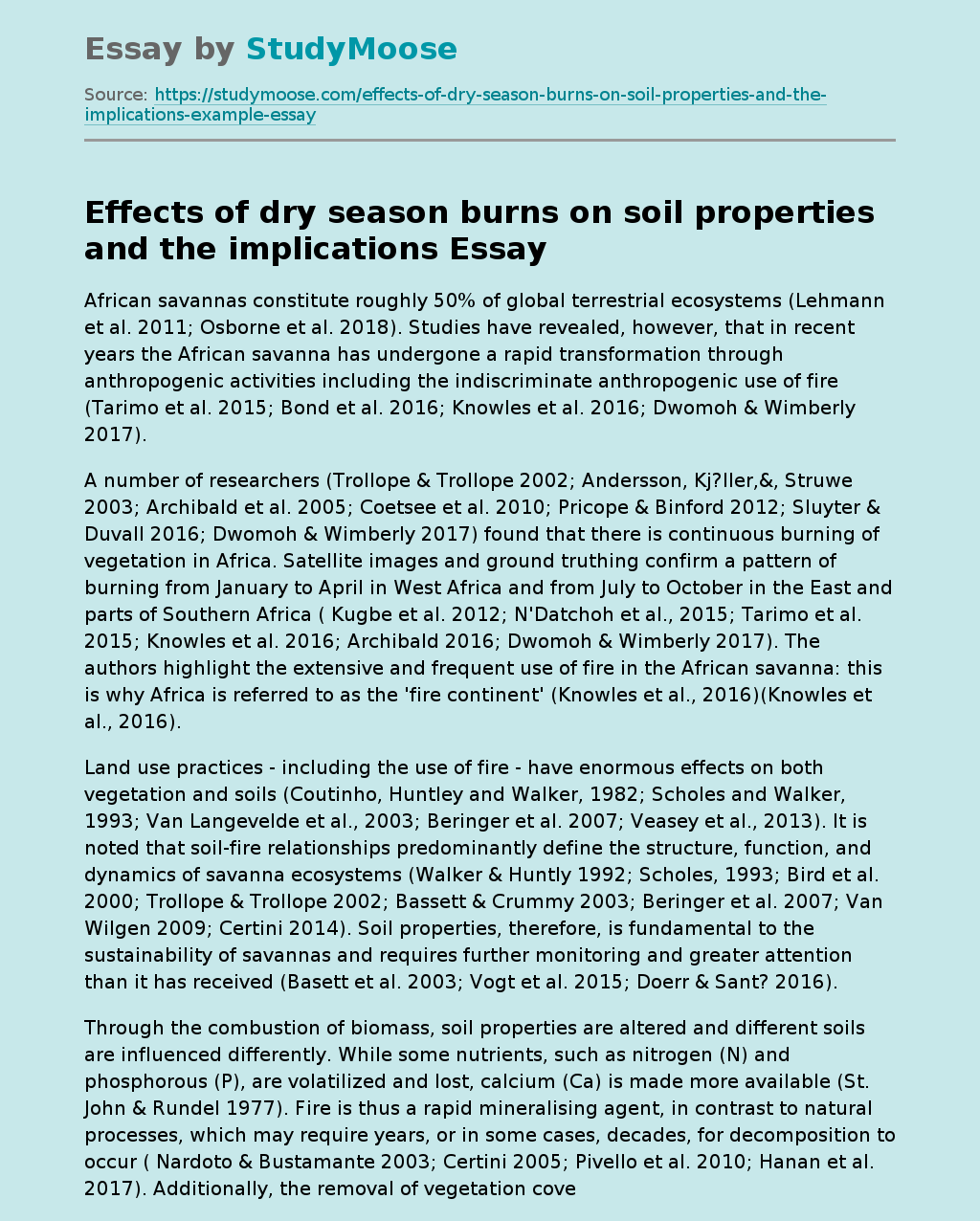