There are many minor themes presented in the short story Doe Season by David Michael Kaplan, appearing in Portable Literature Seventh Edition on pages 368 through 378, however there is only one overwhelming theme presented throughout the entirety of the short story. It is through the protagonist, Andy, a nine-year-old tomboy, which the theme of coming of age, and the struggle most children are forced to experience when faced with reality of having to grow up and leave childhood behind is presented.

Before going on this hunting trip Andy has yet to realize the truth about the way she behaves, she does not find it odd that she enjoys the same activities that her father and young boys enjoy.

Don't use plagiarized sources. Get your custom essay on
“ Doe Season by David Michael Kaplan ”
Get custom paper
NEW! smart matching with writer

It is only when her father made the comment “That’s what the woods are all about anyway… It’s where the women don’t want to go” [Kaplan 374]. Andy is immediately embarrassed when her father makes this remark. She realizes that the three men with her on this hunting trip see her as just another one of the boys rather than a young woman when Charlie and Mac begin to pick on her, saying things like “She ain’t a woman” [Kaplan 374] and “[She’s] half a boy anyway” [Kaplan 374].

Charlie Spoon then proposes that Andy has a choice to make regarding her gender when he asks her which gender she choses to be “A boy or girl” [Kaplan 374] referring to Andy’s decision to be called a boy’s name, Andy, as opposed to her real name Andrea.

She responds simply to Charlie’s question “I am a girl” [Kaplan 374] attempting to put a stop to Charlie’s teasing. In this moment Andy realizes that she is no longer a child, allowed to play in the dirt and hang out with the boys without judgment, but she is a girl who should no longer enjoy the same activities as her father. This moment in the story is very significant to revealing the theme as it illustrates the initial moment of recognition by Andy that she is no longer allowed to behave like a young boy. There are also times in the story that seem to refute the theme, depicting the image of a nine year old girl who still wants to be just like her father, hunting with the guys. “Andy held
the cup like her father did, not by the handle but around the rim.” [Kaplan 370]. In this passage it is revealed that Andy was never allowed to drink coffee while at home with her mother, but on this hunting trip her father allowed her to have a cup with the rest of the guys. Although, while drinking it “She felt a little queasy” [Kaplan 370] she drank it all, trying to impress her father and their friends.

This desire to impress her father, Charlie and Mac may give the impression that Andy has no desire to grow out of being “daddy’s little tomboy” but instead wishes to remain as so. However, this scene only develops the theme more deeply because it reveals to the reader Andy’s complete unawareness of the coming passage from child to young lady. I arrived at this theme after reading about the internal and external struggles that Andy experiences throughout the hunting trip she is attending with her father, his friend, Charlie Spoon, and Charlie’s son, Mac. At the beginning of the trip Andy is still “daddy’s little tomboy”, so much so that she is almost like a son to him rather than a daughter. However by the end of the hunting trip Andy has developed into “daddy’s young woman”, deciding to no longer be called Andy, a boys name, but Andrea, the name she was given at birth, the name of a lady.

She is no longer intrigued by hunting, a male’s activity, but is instead disgusted by it. When Andy watches her father cut open the deer she shot she runs in the opposite direction, leaving behind daddy’s little tomboy and becoming daddy’s matured girl as she runs; “And now they we all calling out to her—Charlie Spoon and Mac and her father—crying Andy, Andy (but that wasn’t her name, she would no longer be called that); yet louder than any of them was the wind blowing through the treetops, like the ocean where her mother floated in green water, also calling Come in, come in, while all around her roared the mocking of the terrible, now inevitable sea.” [Kaplan 378] 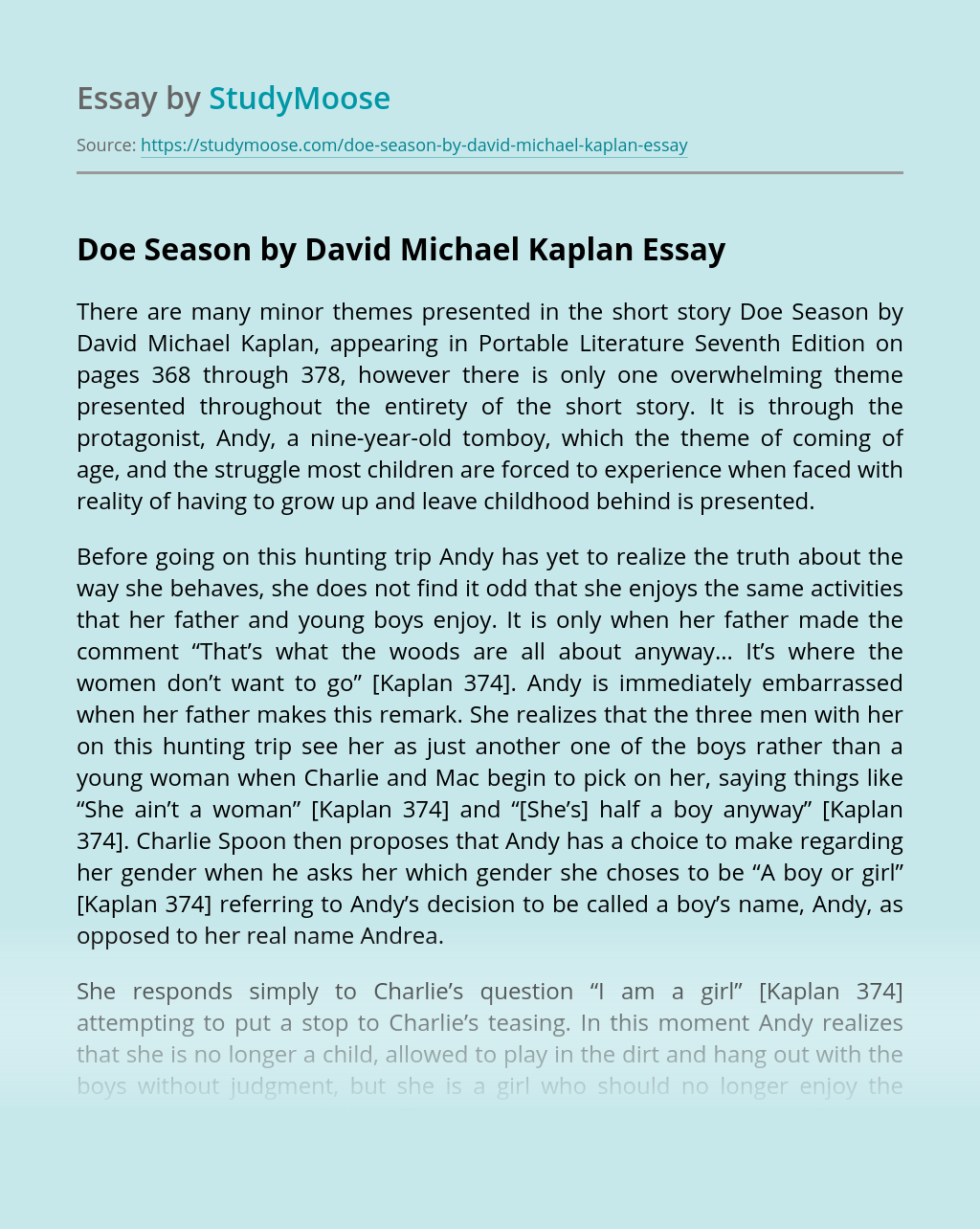