My Brother Goes to Court

The story is set in a city in the Philippines. The young narrator begins by describing his large family. Though they are poor they are full of mischief and laughter. The children are all strong and healthy even though they often go hungry. In contrast, their rich neighbor’s children are thin and sickly although they are given plenty of good food, which their impoverished neighbors enjoy smelling over the fence. Consequently, the rich man brings a charge against the narrator’s family for stealing the spirit of his family’s food.

Don't use plagiarized sources. Get your custom essay on
“ My Brother Goes to Court ”
Get custom paper
NEW! smart matching with writer

The absurd case goes to court, and the narrator’s father agrees to pay back the rich neighbor.

He does this by collecting coins from all his friends present in his hat, then shaking the hat full of coins. Being charged to pay for the spirit of food which his family supposedly got from its smell, he maintains that the jingling of the coins is a fair equivalent. The judge rules in the poor father’s favor, and the rich man is forced to depart with no other payment than the “spirit” of the money the poor man collected.

Proficient in: My Brother

Criticism This story, along with the others in the collection The Laughter of My Father, has a serious intent behind its humor. In fact, Bulosan was outraged by the focus on his stories’ humor.

He said in response to the criticism on the book: “I am mad because when my book ‘The Laughter of my Father’ was published by Harcourt, Brace & Company, the critics called me ‘the manifestation of the pure Comic Spirit.

’ I am not a laughing man. I am an angry man. ” Unfortunately, the general consensus about these stories of Bulosan seems to be, as said Avelina Gil, that although they were “[i]ntended to be serious protest against the economic system of his time,” the stories’ “hilarious, even grotesque, situations which Bulosan treats almost like vignettes mask the satire on Filipino poverty and ignorance.

L. M. Grow suggest that perhaps what accounts for Bulosan’s anger over the critics’ reaction is his anger over the mistreatment he received as a Filipino living in America, which he might have hoped to communicate through his stories. In particular, “My Father Goes to Court” fails as protest literature because the judge favors the side of the poor father, showing that the system can work for the downtrodden. Grow observes Bulosan’s stories read like folklore.

It was said that Bulosan picked up the plots for these stories from an old man in his hometown. Whether or not this is true, as seen in “My Father Goes to Court” the traditional folkloric plot found in trickster-type tales is present. This kind of plot is found in some of the Juan Tamad stories beloved in the Philippines. And so, like most folklore, it has a subtext that promotes the downtrodden in favor of the rich, but no strong protest is evident.

My Brother Goes to Court. (2017, Feb 11). Retrieved from http://studymoose.com/my-brother-goes-to-court-essay 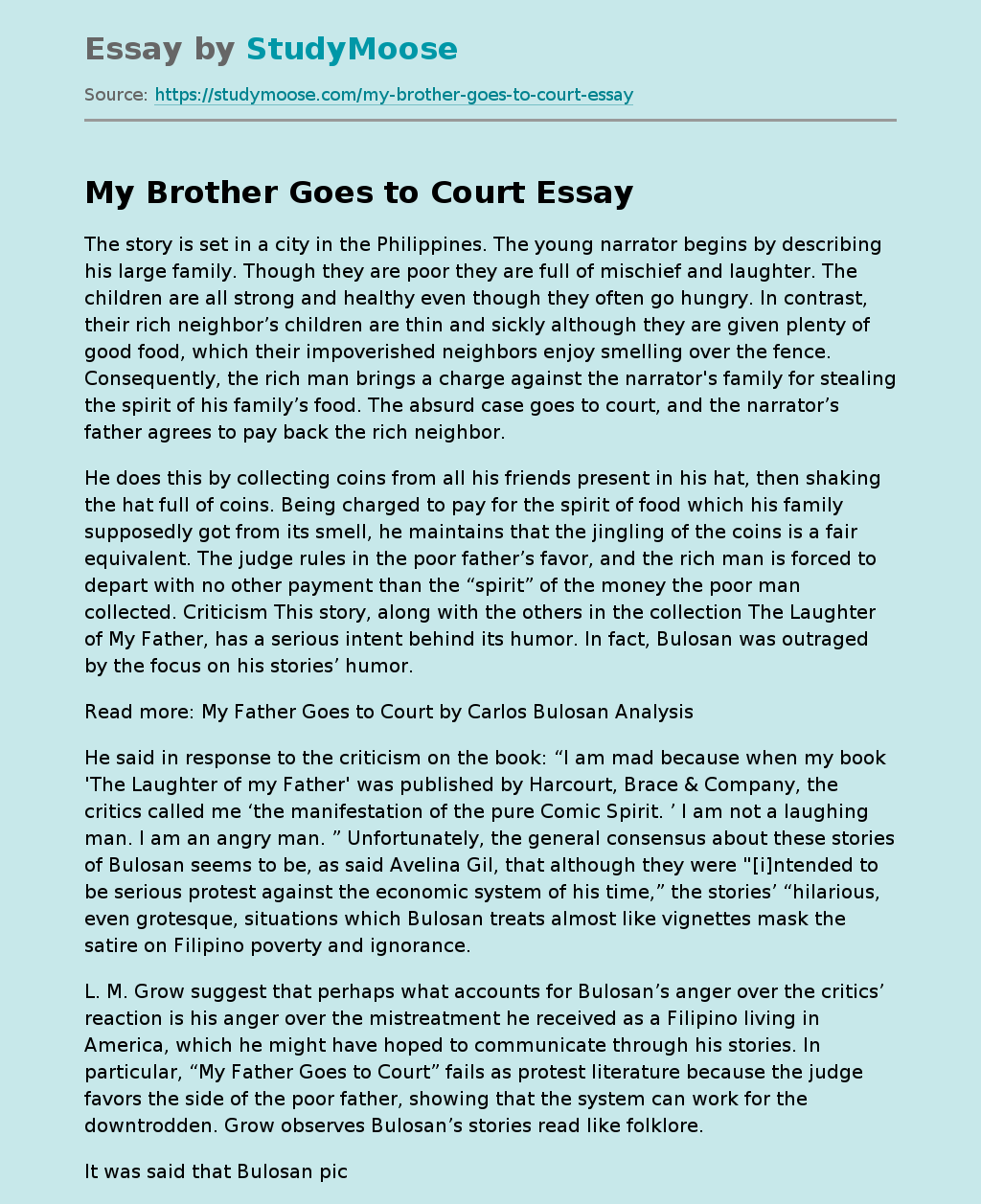