This case is a convergence of several Human behavioral aspects like power distance and effect of values on professional society as an example ‘organizational hierarchy’. SK telecom South Korean company has organizational hierarchy culture that reflects in South Korea’s cultural value to major extent as well. Power distance has several characteristics.

People accepting the unequal distribution of the power, employees value obedience to the authority and are comfortable receiving commands from their superiors without consultation or debate, they give preference to resolve differences indirectly through formal procedures rather than face to face or direct communication.

Don't use plagiarized sources. Get your custom essay on
“ SK Telecom Goes Egalitarian in a Hierarchical Society ”
Get custom paper
NEW! smart matching with writer

On contrary, in egalitarianism, maintaining equity in all entities is a basic doctrine. People expect relatively equal power sharing and interdependent relationship with their bosses rather than mono dependence.

In egalitarian culture, employee may approach boss in condition like decision dilemma. Lower positioned employees may suggest their opinions without hesitancy in abovementioned structure. 1) SK Telecom is attempting to distance itself from which South Korean cultural value? What indicators of this value are identified in this case study? What other artifacts of this cultural value would you notice while visiting a South Korean company that upheld this national culture? SK Telecom is attempting to distance itself from traditional strong hierarchical system which is adopted by South Koreans few decades ago.

It is stated in the case that an Employee at the fourth tier in SK Telecom Co. ‘s five-tier management /professional hierarchy; the 33-year-old strategist held the title of “Hur Daeri” received plenty of respect from subordinates.

None of the subordinates were allowed to question Hur’s decisions, and similarly Hur was expected to wordlessly obey with requests from his superiors. From the above we can state that power is concentrated in SK Company among few people in higher positions like vice president and managers. Involvement of the subordinates in decision making is far away. Even excellent ideas from the subordinates were shot down by their bosses, just because bosses in position have the power to do so.

Subordinates are just made to do the work dispensed by the higher officials. Team leadership positions were given to only those with high seniority. South Korea’s culture of deferring to people in higher positions was deeply ingrained in the telecommunications company. Artifacts like lack of confidence, capacity to sustain peer pressure, locus of control, self efficacy and situation also indirectly becomes reason for positive or negative approach of employee towards organizational hierarchy.

In majority of the Korean companies still the older people with experience are given new projects while younger generation who has enough talent are not encouraged or allowed to undertake a challenging task. Not particularly in South Korea but in any professional organization the above mentioned factors should be balanced along with egalitarianism, which is not visible in South Korea so far, but SK telecom is trying to become iconoclastic company in this example. 2) In your opinion, why is this hierarchical value so strong in South Korea?

What are the advantages and disadvantages of this value in societies? The reason for the hierarchical value being so strong in South Korea is because of their cultural traditions and customs. We learnt from history of Korea that before the division of North and South Korea, it was once a united country where there was monarchial governance. Monarchy government, ruled by a king or a queen who inherits their position from their family, which is often called the “royal family.

With an Emperor ruling the country, he is regarded as the most powerful person in the country. His words and orders should be followed without any questions or dispute. No one can question the Emperor and his orders. The artifacts of this monarchy still exist in South Korean culture and tradition. People in South Korea have adopted unequal distribution of the power and they consider it as part of the system and culture. The same situation we see in many companies like SK Company or Samsung which were followers of hierarchy structure.

In traditional hierarchy, senior managers make up the board of directors and are responsible for establishing strategy, decision making and overall business direction, while middle managers obey the order and imply them. This kind of hierarchical structure clearly defines each employee’s role within the organisation and also defines the nature of their relationship with other employees. Hierarchical organizations are often more vertical with narrow spans of control, which gets wider as we move down the structure like pyramid. 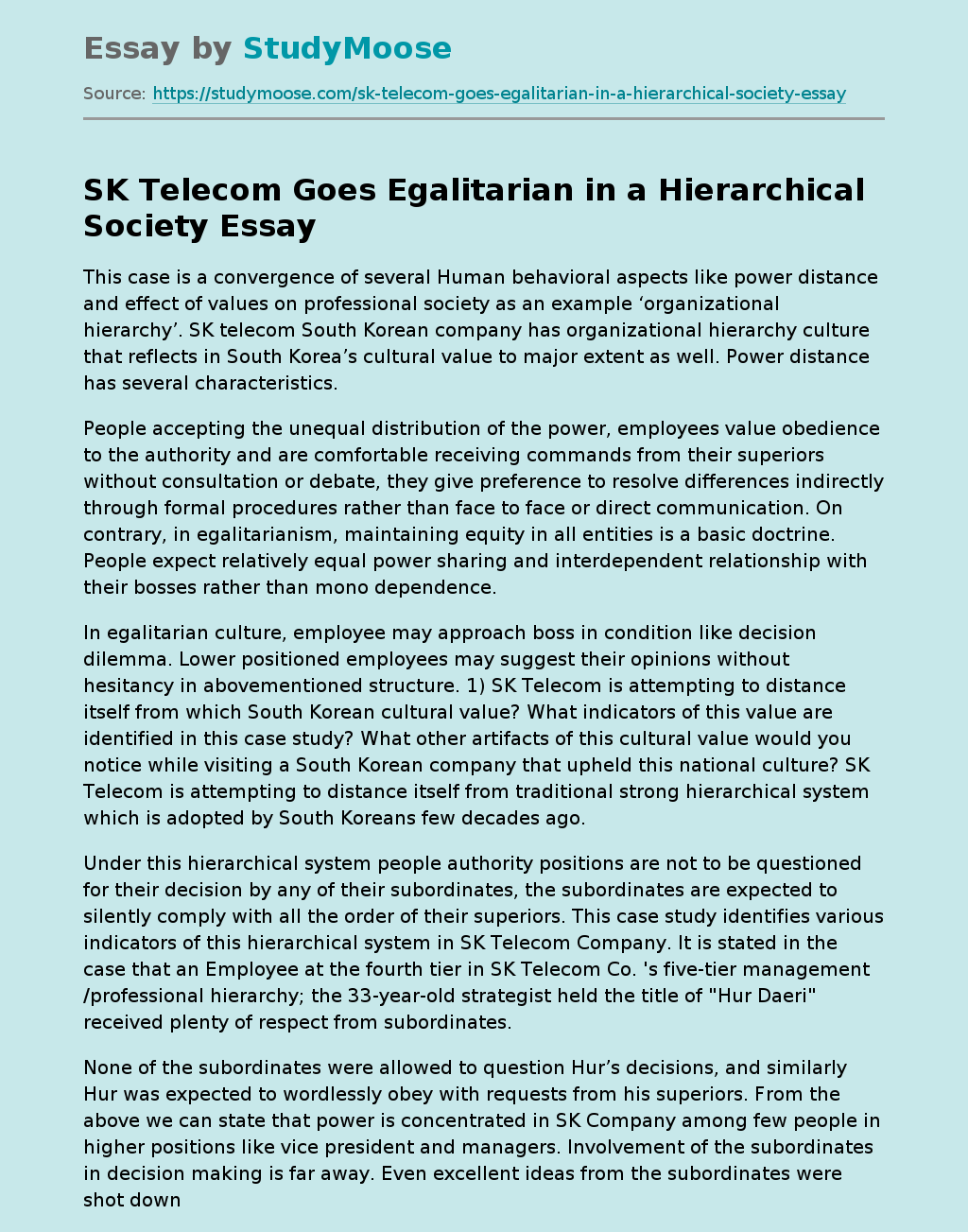