My Father Goes to Court Author by Carlos Bulosan

My Father Goes to Court is just one of the many short stories in Carlos Bulosan’s “The Laughter of My Father” which was published in the 1940’s in the United States. It is the most popular one, I believe. He wrote this story based from folklore in the Philippines and it has an underlying social commentary. It was said that this work is a protest against the economic progress of his time. This story shows the culture, traits and way of the Filipinos.

Don't use plagiarized sources. Get your custom essay on
“ My Father Goes to Court Author by Carlos Bulosan ”
Get custom paper
NEW! smart matching with writer

The story is set in a city in the Philippines. The young narrator begins by describing his large family. Though they are poor they are full of mischief and laughter. The children are all strong and healthy even though they often go hungry. In contrast, their rich neighbor’s children are thin and sickly although they are given plenty of good food, which their impoverished neighbors enjoy smelling over the fence. Consequently, the rich man brings a charge against the narrator’s family for stealing the spirit of his family’s food.

The absurd case goes to court, and the narrator’s father agrees to pay back the rich neighbor. He does this by collecting coins from all his friends present in his hat, then shaking the hat full of coins. Being charged to pay for the spirit of food which his family supposedly got from its smell, he maintains that the jingling of the coins is a fair equivalent. The judge rules in the poor father’s favor, and the rich man is forced to depart with no other payment than the “spirit” of the money the poor man collected.

In the Filipino context, this story favors the underprivileged families over affluent ones. It is supported by the part at the end of the story where after the father gave back the “spirit of wealth” through the jingling of the coins in the straw hat, the judge immediately dismissed the case. While it is not really true in this day and age because the poor has no fair fight against the rich, the idea behind it is not quite simple. Maybe the author wanted to show the issue the other way around, thus, using a reverse psychology.

Filipinos are known to be light people. We don’t usually wear much burden on our shoulders. Well, we have a lot but how do we cope with every situation? By not taking it so hard, of course! In every problem, like poverty, even if they don’t get to eat much for the day, they are still smiling and laughing together and the family is still intact. Like in the story, the narrator’s family is a poor family, and yet, because they are not so sensitive, they get to play outside and laugh. In the rich family’s case, they are abundant in food and a comfortable lifestyle but are still not content with what they have and push others-like the poor family- to pay for it. In the real world, rich people tend to step down on the poor because they perceive themselves more powerful than the poor.

In the part where the judge asked the father where his lawyer was, and he said he doesn’t need one, it is seen as the turning point of justice in the Philippines. The law dictates that every citizen is given justice. But is it really the case? The law takes for granted the poor. Yes, the poor can’t afford hiring the best lawyers so the rich takes advantage of them. In the story’s case, the judge didn’t care to give him a lawyer where in the real world, if you have no lawyer, it is as good as loosing.

My Father Goes to Court Author by Carlos Bulosan. (2016, Apr 17). Retrieved from https://studymoose.com/my-father-goes-to-court-author-by-carlos-bulosan-essay 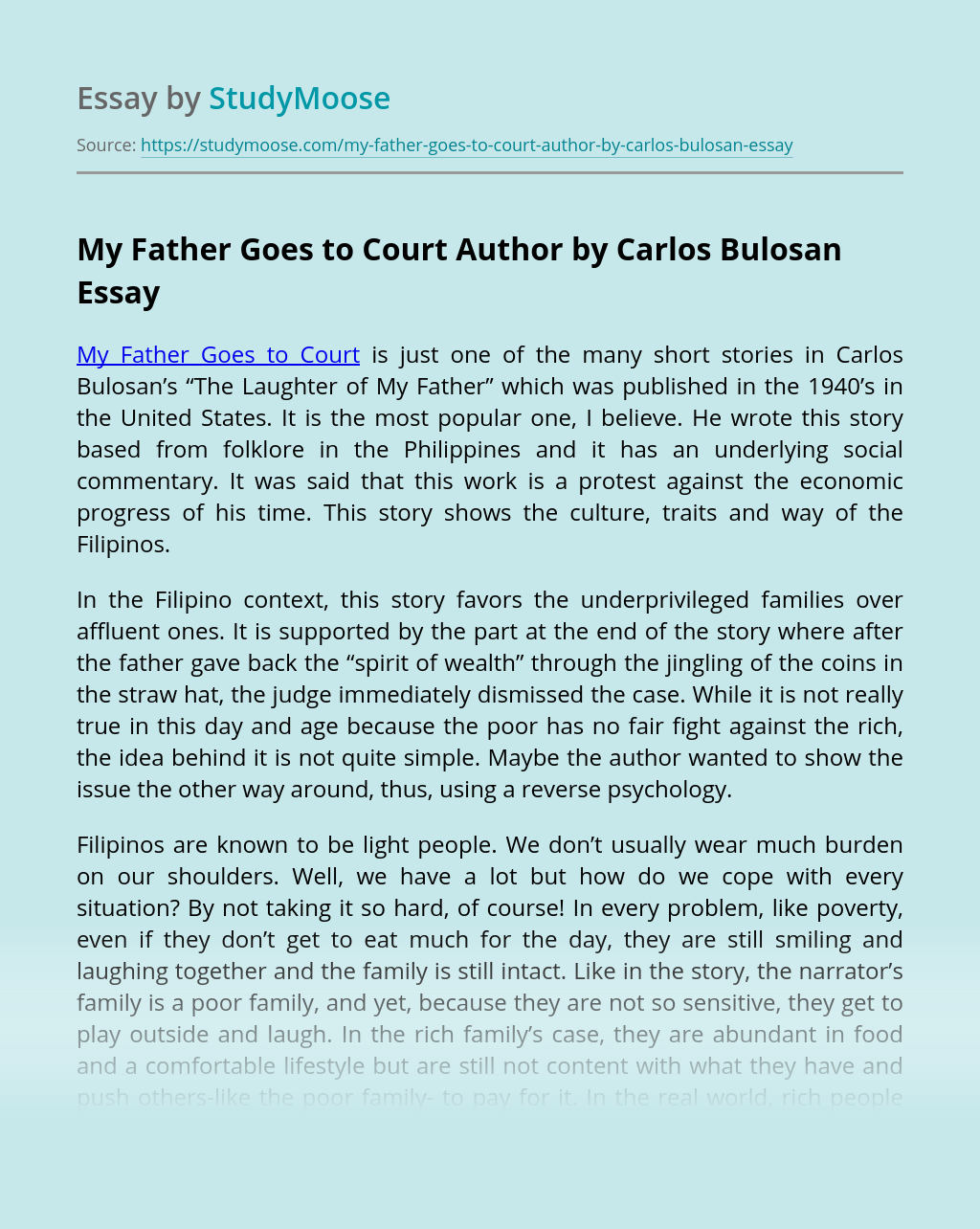