William Carlos Williams’s “The Dance” (1944) illustrates the joyous, lively atmosphere of a fair. It also uses textual patterns to represent the dance depicted in Brueghel’s great painting, The Kermess. The speaker, who is describing the painting, uses the poem’s tempo, rhymes, and repetitions to accomplish this effect.

“The Dance” stands out from some of Williams’s more famous poems. “The Red Wheelbarrow” (1923) and “This Is Just To Say” (1934) are both entirely motionless and describe specific moments in time.

Don't use plagiarized sources. Get your custom essay on
“ Poem Explication: “The Dance” by William Carlos Williams ”
Get custom paper
NEW! smart matching with writer

While “The Danse” address a single moment as well, it is full of motion. This obvious difference comes to life in the first line when the poem begins to describe Brueghel’s painting, The Kermess. “Kermess” literally means peasant dance. It depicts men and women dancing in celebration of the founding of a church. The speaker makes it clear that the dancers are not professionals with his description of their bodies, “their hips and their bellies off balance to turn them…swinging those butts” (7-9).

These are evidently ordinary people dancing for joy.

Williams’s text is overwhelmingly joyful. “The squeal and the blare and tweedle of bagpipes, a bugle and fiddles tipping their bellies” (3-5). These peasants are happy and lost in the “squeal” of music. One can almost hear the upbeat rhythm of bagpipes, bugles, and fiddles as they read the poem’s words. Just as the speaker describes the specific moment, the crowd is lost in this moment. They are not thinking of debt or financial problems, only the ever-moving dance.

The dance becomes more wild and out of tune. The dancers never loose their love or passion, only their rhythm. They are fat and off balance, but they keep on dancing. “Those shanks must be sound to bear up under such rollicking measures” (10-11). Williams’s poem shows us that life is beautiful in the most ordinary ways. The speaker depicts ordinary people dancing in great detail. We see the splendor of a simple event. We see the life worth living. This parallels Williams’s belief that poetry is “equipment for living.” The speaker actually advises readers to live with the same enthusiasm as the dancers in Brueghel’s painting. “Prance as the dance in Brueghel’s great picture, The Kermess” (11-12). Repetition of the first line of the poem also adds to the sudden sentimental feeling.

Williams mirrors the joyous rhythm of the fair with the words on the page. The poem opens with a sense of interlacing movement. “The dancers go round, they go round, and around” (2-3). At the same time that the speaker repeats the word “round,” he opens the rhyming pattern, beginning with “round.” Throughout the poem, we hear the same rhyming scheme: “round…around…round…impound…Fair Grounds…sound.” Like the dancers, the words bring the interlacing feel round and round through the poem.

The twisting feel and movement of the poem goes very fast. There is only one full stop in the poem, which is on line eight. Additionally, the fist letter of each line remains lower case, increasing the velocity at which one reads. The reader moves with the same force and enthusiasm as the joyous dancers in Brueghel’s painting. The text moves with circular motion in two ways. First, it moves round and round with the rhyme scheme. Then, it finishes with the same line as it began, again suggesting circularity.

Williams echoes the tone of a Brueghel’s painting, The Kermess, in his poem
“The Dance.” The poem was written towards the end of his career, almost 20 years after he famously wrote “The Red Wheelbarrow.” “The Dance” is appropriately written in open form, as it captures the painting to words translation. The words dance like the peasants in the painting. Williams’s speaker touches on the simple life of love and dance – the life of the moment.

Poem Explication: “The Dance” by William Carlos Williams. (2016, May 08). Retrieved from http://studymoose.com/poem-explication-the-dance-by-william-carlos-williams-essay 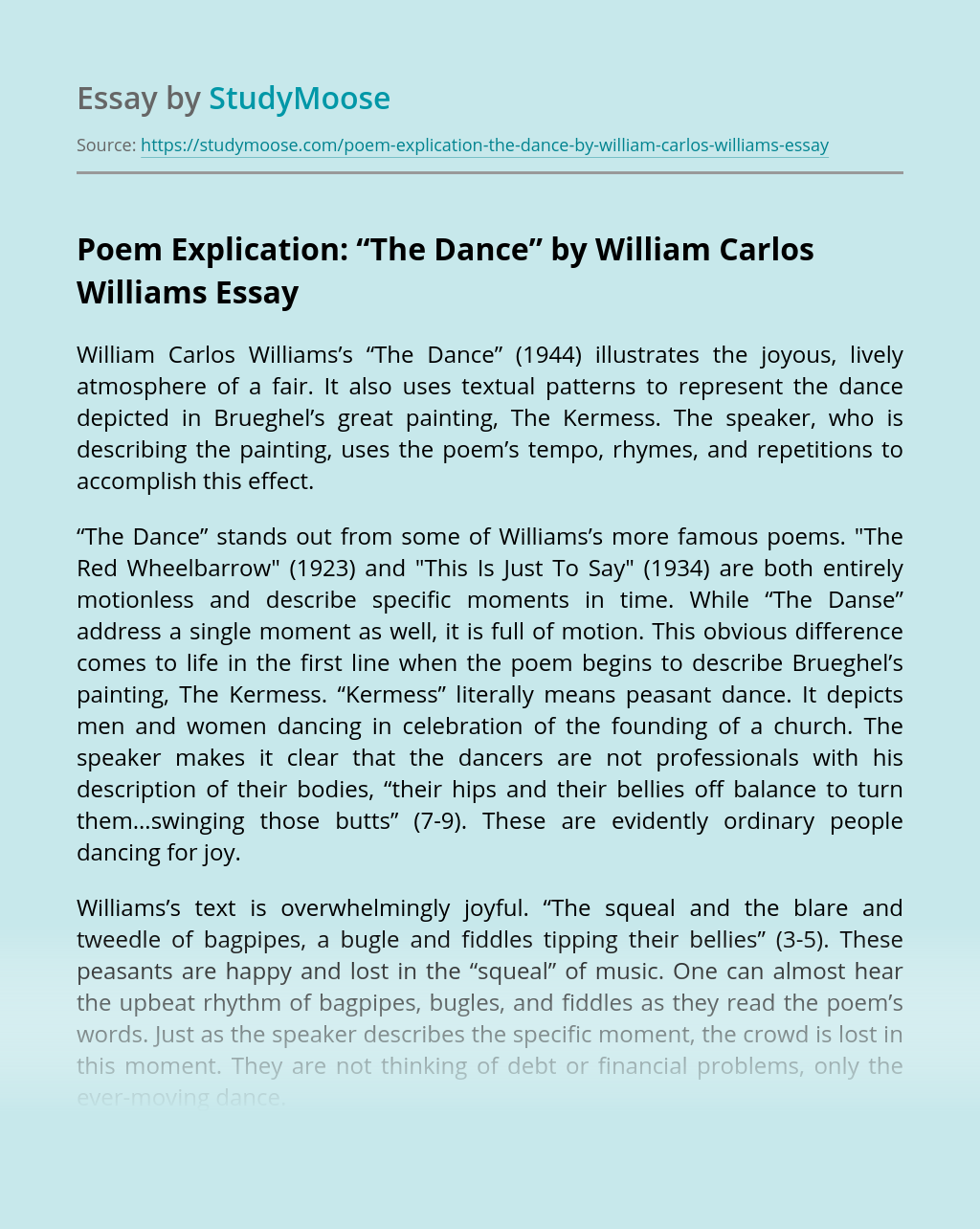