William Carlos Williams’ poem “Danse Russe,” is written like most modern poetry, in free verse. Like nearly all of Williams’ work, “Danse Russe” has no meter nor does it follow any rhyme scheme whatsoever. Disregarding an iamb or steady beat pattern, the poem’s rhythm is organic, rather than metrical, meaning that the poem flows smoothly from one line to the next without any guidelines to follow. It is almost as if the poem is to be read as a small statement or random thought occurring inside the mind of the poem’s voice.

Don't use plagiarized sources. Get your custom essay on
“ “Danse Russe” by William Carlos William ”
Get custom paper
NEW! smart matching with writer

After reading the poem in its entirety a few times, the voice of the poem is a middle-aged male, probably of middleclass. There seems to be a sense of urgency, as though the voice does not have much time to himself to enjoy peace and quiet.

In the very first lines of the poem, “If I when my wife…/ and the baby Kathleen/ are sleeping,” the reader is given the idea that the time at which the events of the poem are occurring are most likely going to be very late in the evening or early morning.

One could assume it is early in the morning as lines four through six describes the sun as “a flame-white disc/ in silken mists/ above shining trees.” Williams’s vivid description of the sun rising above the shiny trees instantly gives the reader a clear image of that time just after dawn when the sun is clearing the trees and giving them a glowing look.

William’s imagery, though in its most vivaciousness here, is not limited to these early lines (Schneider). As the reader moves further down to line eight, the voice of the poem contemplates dancing in his “north room,” or private study. But not only does the voice contemplate his antics, he goes into detail describing his motions as grotesque and crude.

While describing his movements as he sees them in the mirror, the voice is one of deep admiration for the beauty of the naked body. The subject of the poem twists and turns in such odd positions in order to be able to admire various physical aspects from multiple views and angles. As the voice speaks, the reader should feel that the subject matter for “Danse Russe” is very happy and peaceful (Allison). The voice obviously does not have much free time to spare. The few moments that he could spend by himself in his study, dancing about, are probably the only ones he would have to himself throughout the day; he will probably go to work all day and spend the evening with his wife and children.

In lines twelve to fourteen where the voice states, “I am lonely, lonely. / I was born to be lonely. / I am best so!” the feeling of the poem is still one of extreme joy. Though the subject matter shifts to the voices’ loneliness, that single expression, “I am best so!” conveys a strong idea of happiness (Kristin). Once again, if the voice has very little time to himself, anything he can get is worth every second. The final two lines really reiterate this point as well. “Who shall say I am not/ the happy genius of my household?” In ancient Rome, the guardian spirit of the house was known as the genius. The voice is stating, “I am the head of this household.” My stress and problems could be appeased if I could have some time to my self.

In Russian, the poem’s title, “Danse Russe,” literally translate into “Russian Dance,” specifically, a ballet. Ballets are very elaborate and formal, and do not follow a repetitious pattern. Like the ballet, Williams’ poem does not follow any particular poetic form. The language of the poem describing the actions of a naked dancer helps to give the poem the fluid organic rhythm that one could also use to depict a ballet dancer’s movements.

Obviously, the title introduces its central theme, but it is also encompassed beautifully in the body of the poem. Williams manages to break apart the sequence of the thoughts into a flawless dance of the written art. His reputation of the voice’s thoughtful considerations, using the phrase “If I…” on three separate occasions helps the reader be aware of the excitement the voice feels as he realizes the potential of having his own secret activity. In addition, what is stopping him from exploring these possibilities? Perhaps he is worried about his wife waking up and finding him out; or that he simply cannot bear the thought of having his happiness stripped away from him as his role in civilization calls. The way Williams describes the serenity of a quiet morning, the dreary grind of day-in, day-out does seem heart wrenching in comparison. However, the central theme of the poem is a dance, and while it may take two to tango, it only takes one to dance. 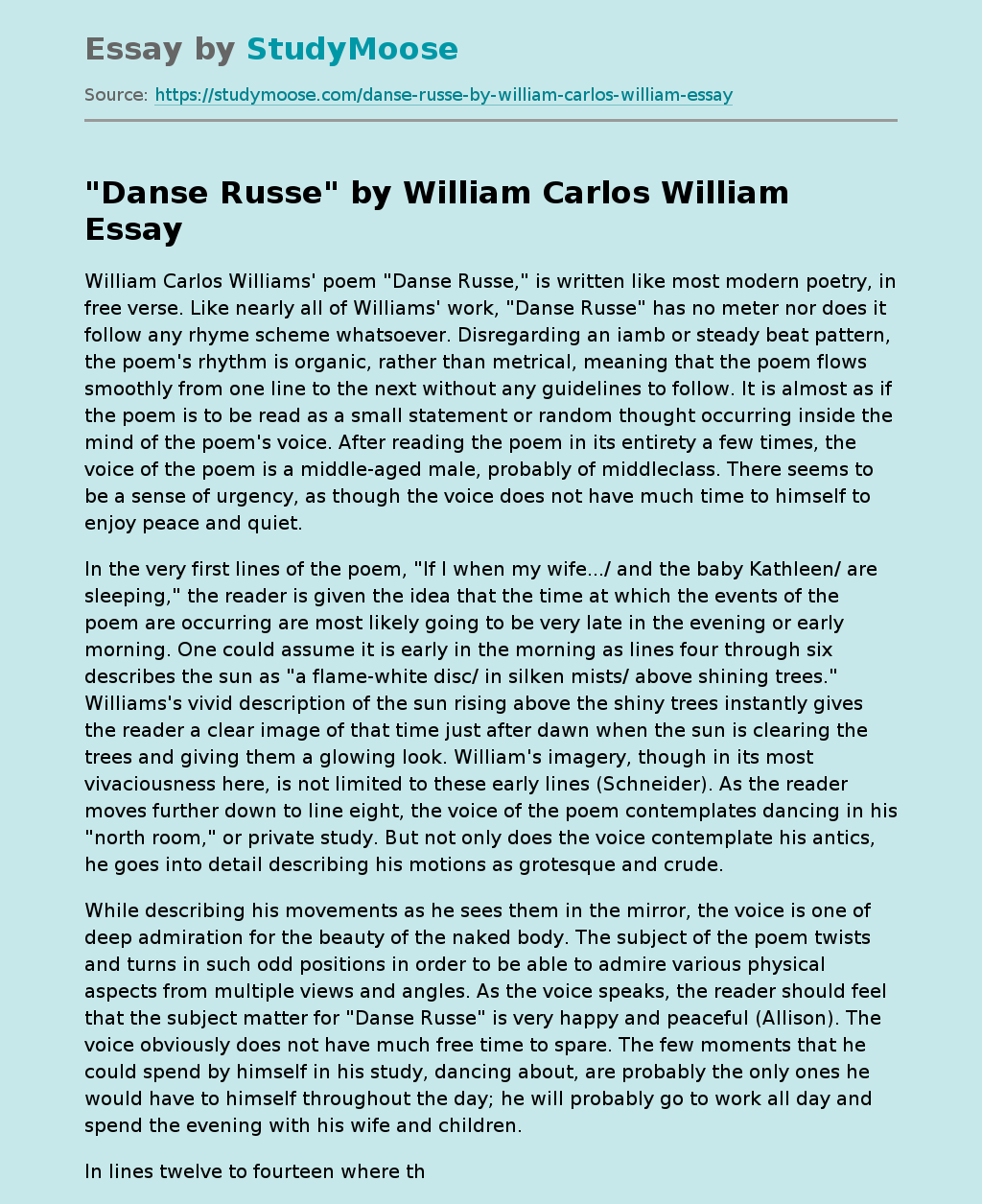