An Explication Of William Carlos Williams’s “The Red Wheelbarrow”

Usually, in interpreting a poem, one simply relies on the metaphors behind the words to find a meaning. Sometimes, however, the structure of the poem itself and the literal image which the words convey are already the meaning of the poem. The significance in the reading of William Carlos William’s poem, “The Red Wheelbarrow”, lies in the structure by which the poet arranges the words and the snapshot of the image which the poem describes. The entire poem comprises of a single sentence cut into parts and stacked so that it becomes a four-stanza poem, each stanza of which comprises of two lines.

Don't use plagiarized sources. Get your custom essay on
“ An Explication Of William Carlos Williams’s “The Red Wheelbarrow” ”
Get custom paper
NEW! smart matching with writer

The first lines are irregular; those in the first and fourth stanzas are made up of four syllables. The two sandwiched stanzas are only comprised of three syllables. Meanwhile, all second lines in each stanza are single words with two syllables each. As a sentence, the poem would be insignificant both for its mundane subject matter and lack of metaphor: So much depends upon a red wheelbarrow glazed with rain beside the white chickens.

It becomes a subject for careful scrutiny, however, because of the manner by which the poet cuts the sentence into parts.

The line breaks, cutting off whole words into two, suggest cued halting in the reading and the reader is forced to take in every image which every word evokes, both as a cut-off piece (i. e. wheel and barrow) and as a compound (i. e. wheelbarrow), slowly, part by part, then as a whole.

The reader also learns to appreciate the painting which is the poem, like he does when viewing a still-life—a captured image intensified by the rendering—from a master artist, framed on a wall.

The impact of the entire poem rests on the first stanza, “so much depends/ upon” (lines 1-2). It suggests the importance of what are to follow. It appropriates the value of the simple objects that would be enumerated. The placement of the word “upon” (line 2) as a line by itself, connotes the gravity of the importance of the wheelbarrow which is the central image in and subject of the poem. The word “wheelbarrow” is cut into two parts, “wheel” as a part of line 3 and “barrow” as an entire line 4.

With the separation, the reader is forced to examine the machine by parts, the wheel first, before taking in the whole machine. His visual sense is also arrested with the middle word, which is a strong and bright color: red. The fifth line “glazed with rain”, gives the red wheelbarrow a character. It is not just a bright red wheelbarrow. It is dulled by the rain. It is a used and beaten implement. It has to withstand the natural elements. This reinforces the theme of attributing significance to this everyday object.

This wheelbarrow does a lot of farm work, helping the farmer move and carry soil, manure, produce, etc. The same visual stimulus is presented again with the line “beside the white” (line 7), the adjective separating the noun, the “chickens. ” (line 8), which the color pertains. Ending the line with another color, and one that contrasts sharply with the first color mentioned in the preceding stanza, makes the two objects captured in the painting (which is the poem) stand out against each other. The red wheelbarrow stands out against the white chickens.

As an imagistic poem, “The Red Wheelbarrow” presents a snapshot of a farm scene. A red wheelbarrow sits idly on the ground, wet with recent rain, while chickens gather beside it, unmindful of the machine. The scene is ordinary and so is the description. The snapshot, however, perceived alongside the words and the form by which Williams creatively arranges the words, become more exciting because it begins to approximate a painting of an ordinary scene that is made special by the careful attention, reinterpretation and presentation of the poet.

An Explication Of William Carlos Williams’s “The Red Wheelbarrow”. (2017, Jan 08). Retrieved from https://studymoose.com/an-explication-of-william-carlos-williamss-the-red-wheelbarrow-essay 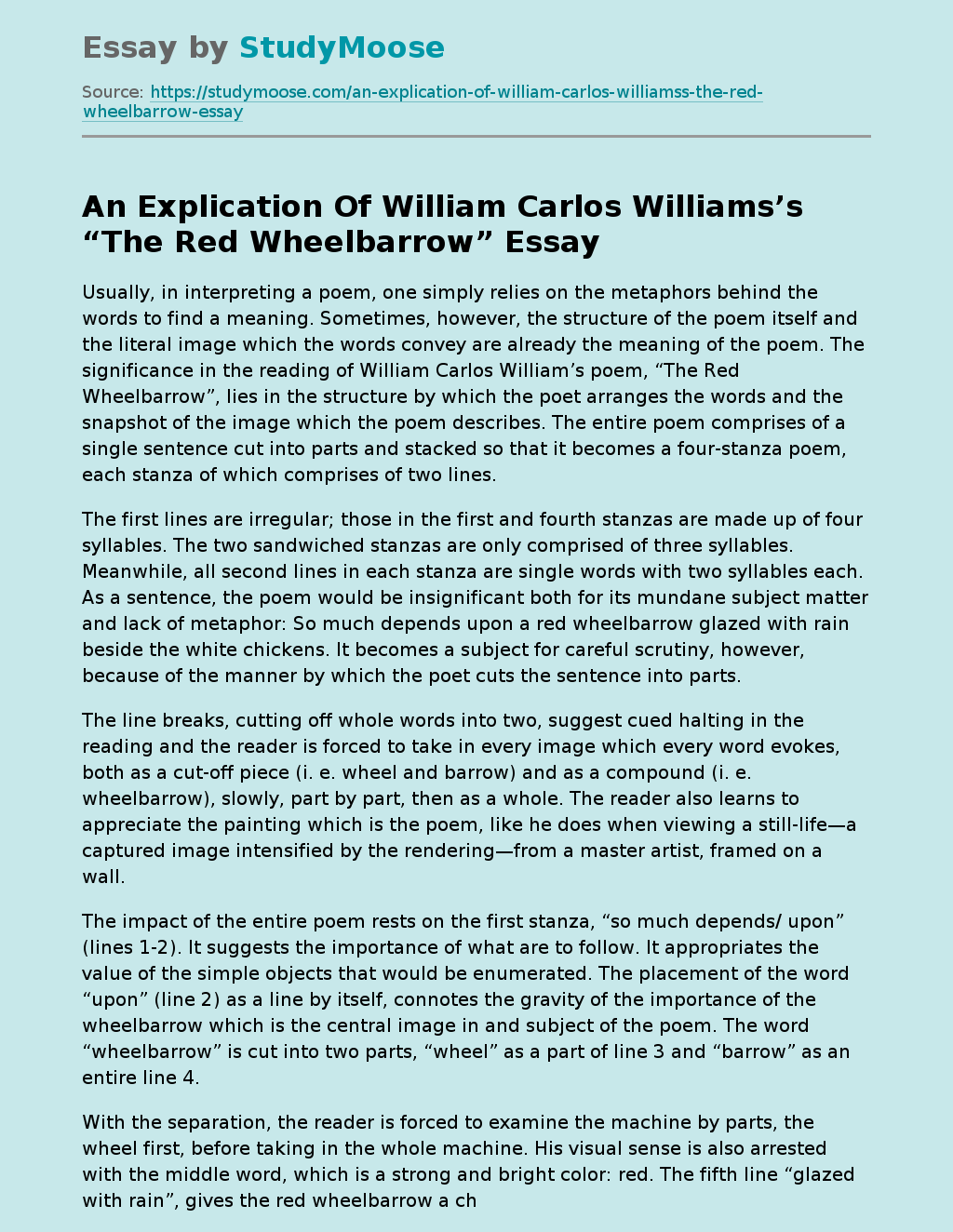