Macbeth Explication: "If it were done when 'tis done"

The final scene of the first act opens up with a powerful soliloquy presented by Macbeth, If it were done when tis done (I.7.1-28). Shakespeare uses various literary techniques to express the ideas rushing through Macbeths mind prior to the murder of Duncan in his home. In previous scenes, Macbeth has been told prophecies of his future predicting him as king of Scotland, Duncans current position. Macbeth, with the aid of his wife, sees this task accomplishable only by the murder of the current king.

Don't use plagiarized sources. Get your custom essay on
“ Macbeth Explication: “If it were done when ’tis done” ”
Get custom paper
NEW! smart matching with writer

This soliloquy presents itself at a crucial point of decision, only hours before the opportune minute of attack

The soliloquy opens with Macbeths ideas on how he would hope the murder to be. If it were done when ’tis done, then ’twere well / It were done quickly (I.7.1-2). These two lines show how indecisive Macbeth is about committing the crime. He is saying that if the murder be done, it should be done fast.

If the assassination / Could trammel up the consequence, and catch / With his surcease success; that but this blow / Might be the be-all and the end-all here, / But here, upon this bank and shoal of time, / We’d jump the life to come. (I.7.2-7). Here, Shakespeare uses a metaphor to compare the murder as something that could be caught and once caught; it would not yield any consequences.

He then goes on to say that in the real-world, this cannot be true. Shakespeare craft fully shows that Macbeth knows that their will be consequences to the murder and that thinking that everything will be okay is not a logical thought.

Macbeth continues, But in these cases / We still have judgment here, that we but teach / Bloody instructions, which, being taught, return / To plague th’ inventor: this even-handed justice / Commends the ingredients of our poisoned chalice / To our own lips. (I.7.7-12). Macbeth states that he still has the choice whether to commit the murder or not to. Shakespeare uses a metaphor to compare the murder with bloody instructions being taught. Macbeth also says that the person who commits the murder (or teaches the bloody instructions), come back to the murderer (or inventor). By saying this, Shakespeare throws in the element of Macbeth foreshadowing his own demise. He then goes on to compare the return of the misdeeds through the imagery of a poisoned cup. He speaks of how the poisoned chalice, although used on others, will once again come around to his own lips.

Macbeth begins to give and weigh reasons for and against Duncans murder. He’s here in double trust: / First, as I am his kinsman and his subject, / Strong both against the deed; (I.7.12-14). Macbeth states that Duncan trusts him in two ways, first of which as his loyal solider. Macbeth then explains how he is expected to be loyal to his king and protect him; not the contrary. In these lines, Shakespeare includes the irony that Macbeth plans on doing what he is supposed to prevent.

Macbeth continues, then, as his host, / Who should against his murderer shut the door, / Not bear the knife myself. (I.7.14-16). Here, Macbeth states that he is, secondly, Duncans host. Therefore, Macbeth should be protecting Duncan against a murderer, rather than killing Duncan himself. Shakespeare uses the same irony as in the preceding lines.

Macbeth continues with reasons against the murder. Besides, this Duncan / Hath borne his faculties so meek, hath been / So clear in his great office (I.7.16-18). Here Macbeth states that Duncan has always been good to him and never abused his power.

Macbeth now switches over to the topic of what will happen if Duncan is murdered. that his virtues / Will plead like angels, trumpet-tongued, against / The deep damnation of his taking-off (I.7.18-20). Shakespeare uses personification and a simile to compare what will happen to Duncans virtues after the murder. He describes Duncans virtues as angels, who with spread the news of his murder to all.

He proceeds, And pity, like a naked newborn babe, / Striding the blast, or heaven’s cherubim, horsed / Upon the sightless couriers of the air, / Shall blow the horrid deed in every eye, (I.7.21-24). Shakespeare again uses a simile to compare the pity of the people over Duncans death to a newborn baby. Shakespeare then uses imagery to convey a picture of how fast and gracefully the news will spread; a baby, a common representation of innocence, whisking through the air, telling everyone about the deed that took place.

In the succeeding line, Macbeth predicts, That tears shall drown the wind. (I.7.25). Here, Shakespeare uses vivid imagery to describe the mood of the people after the death. People will be distraught over this occurrence and will weep as rain falls from the sky.

In the conclusive lines of the soliloquy, Macbeth poses the sole reason he has for the murder, I have no spur / To prick the sides of my intent, but only / Vaulting ambition, which o’erleaps itself / And falls on th’ other. (I.7.25-28). Macbeth here says that he has absolutely no reason to kill Duncan, save for his ambition. In his final sentence, Shakespeare then personifies his ambition as overleaping which falls over itself. Macbeths ambition overleaping and falling also foreshadows Macbeths death.

After the soliloquy, Macbeth changes his mind and no longer wishes to kill Duncan. But with the persuasion of his wife, changes his stance again and goes through with the murder. All of the events, the spreading of the news of the murder, the consequences of the assassination, people hysteria and Macbeths own downfall, which Macbeth foreshadowed in his soliloquy, do prove accurate.

Macbeth Explication: "If it were done when 'tis done". (2016, Jul 05). Retrieved from https://studymoose.com/macbeth-explication-if-it-were-done-when-tis-done-essay 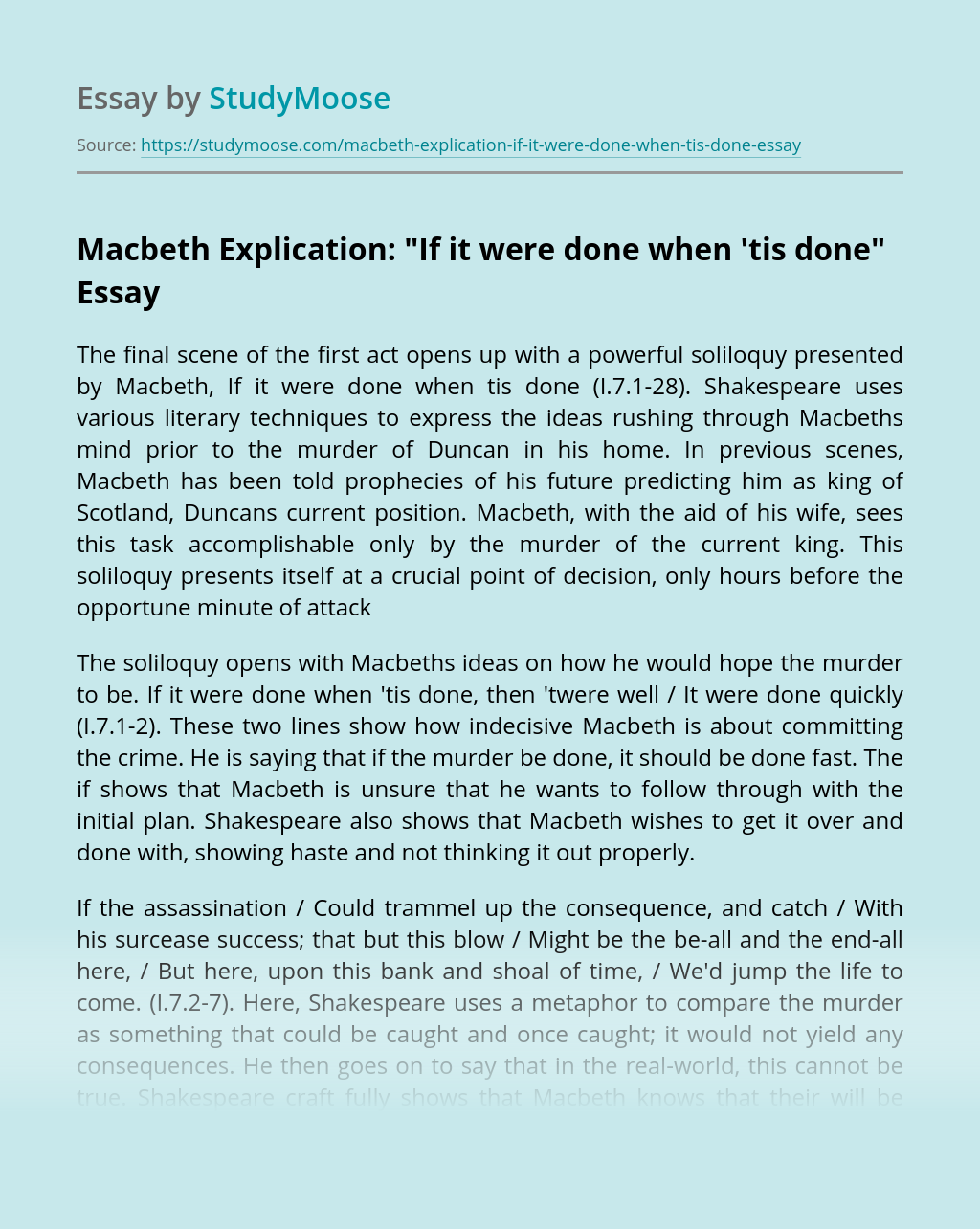