1984 Big Brother Is Still Watching You

(1984) Big Brother is Still Watching You 1 “They always say that time changes things, but you actually have to change them yourself. ” – Andy Warhol In the novel, 1984, Winston Smith realized the change that had to be made in him, or rather his environment. The author, George Orwell, emphasizes the change of character and growth of Winston throughout his journey in a totalitarian state, Oceania. An ongoing battle of struggle and acceptance is apparent in Winston to and fro. On one hand, Winston hates the Party and hopes Emmanuel Goldstein and the Brotherhood overthrow it.

Don't use plagiarized sources. Get your custom essay on
“ 1984 Big Brother Is Still Watching You ”
Get custom paper
NEW! smart matching with writer

On the other, he is reluctant to rebel through fear of Room 101.

Contrary to the fact, in the United States there are many similarities and differences from 1984; The U. S. Government does not control all aspects of life rather it is a democracy. However, Osama bin Laden is the same public figure as Emmanuel Goldstein and the Brotherhood. Lastly, the U. S. Prison System, like Room 101, fosters fear into Americans alike.

In 1984, George Orwell emphasizes the term totalitarianism. According to Merriam-Webster’s Collegiate Dictionary, totalitarianism is the political concept that the citizen should be totally subject to an absolute state authority.

” Winston Smith worked in the Ministry of Truth where he rewrote history in order for the Party to maintain power.

Winston knew that “Oceania, four years ago, had been at war with Eastasia and at peace with Eurasia” but the history books, telescreens, and everything in between said differently. “I thought we’d always been at war with Eurasia, she said vaguely. It frightened him a little. The invention of airplanes dated from long before her birth, but the switch-over in the war had happened only four years ago, well after she was grown up. ” This was how the Party maintained power. They kept everyone in a state 2 of orthodoxy. If one did not know their “real” past, then one could never question the state of being. In a way, the world-view of the Party imposed itself most successfully on people incapable of understanding it. They could be made to accept the most flagrant violations of reality, because they never fully grasped the enormity of what was demanded of them, and were not sufficiently interested in public events to notice what was happening. By lack of understanding the remained sane. They simply swallowed everything, and what they swallowed did them no harm, because it left no residue behind, just as a grain of corn will pass undigested through the body of a bird. On the contrary, the United States Government allows, rather gives citizens opportunities to broaden their horizons. Although the U. S. Government is broken up into three branches similar to the Party’s ministries, the legislative, executive, and judicial branch remains “sane” through a system of separation of powers and the system of checks and balances. In this system, the power is not vested onto one single being. Although there is a President, he does not have the power to solely make a decision without consulting the three different branches.

Unlike the totalitarian Party in 1984, the United States we live in today is a democracy. According to Merriam-Webster’s Collegiate Dictionary, democracy is simply a government by the people. Therefore, one can see the distinct difference from society in 1984 to modern day United States. Emmanuel Goldstein and the Brotherhood were mere public figures that the Party created to instill fear and hate in the eyes of the people. “As usual, the face of Emmanuel Goldstein, the Enemy of the People, had flashed onto the screen. There were hisses here and there among the audience.

The little sandy-haired woman gave a squeak of mingled fear and disgust. ” The people hated Goldstein because he was apart of something that they could not fandom. How could someone be against the Party? “Goldstein was the renegade and backslider who once, long ago (how long ago, nobody quite remembered), had been one of the leading figures of the Party, almost on a level with Big Brother himself, and then had engaged in 3 counterrevolutionary activities, had been condemned to death, and had mysteriously escaped and disappeared. Somewhere or other he was still alive and hatching his conspiracies. The fact that Goldstein was still roaming the streets somewhere put even more fear in the people. The Party recognized this and used the image of him to maintain and restore order. People that loved the party got a sense of inspiration to work harder when the telescreen portrayed the incomprehensible face. But people that were against the Party felt a sense of hope. Hope that one-day Goldstein and the Brotherhood would conquer the Party. The Thought Police and Spies would eventually discover those that felt hope. “A day never passed when spies and saboteurs acting under his directions were not unmasked by the Thought Police. In any case, Goldstein and the Brotherhood were fictional characters bought forth to weed out those that did not agree with the Party. Which in turn, maintains totalitarian in Oceania. Like Goldstein and the Brotherhood in 1984, Osama bin Laden was the same figure in the United States. Bin Laden was used to keep the war on terrorism alive and well. Would George W. Bush have been reelected President if the September 11th terrorists attacks never took place? If fear hadn’t been imposed upon Americans would we be in support of the War on Terror? If these acts never occurred, would the Republican Party have been in power for so long?

I believe they wouldn’t have. If Bush and the Republican Party didn’t instill fear into the eyes of Americans, we never would have been blinded from the truth. The truth that Republicans companies such as, Halliburton and DynCorp, profit from war. The truth that Mr. Bush did a horrible job as President of the United States. Just as in 1984, the so-called War on Terror is the Two Minute Hate. It is what kept Americans dumbfounded for a long time. The Republican Party used Bin Laden, just as the Party used Goldstein, to remain in power. Until the Democrats did what Winston Smith attempted.

They enlightened the few “insane” ones left. In the United States, there is a great fear of the Judiciary Branch. This branch of government interprets the law. Judges in this branch, have to power to sentence 4 citizens to prison. The fear of being a helpless prisoner is one we all possess. Fear is what keeps us sane. Fear keeps us from thrashing enemies and robbing banks. If one had no fear, then these senseless acts could be possible. Prison, evidently, is one thing we all fear. In the 1984, Room 101 terrorized everyone in the Ministry of Love. People did anything in their dying soul to stray away from Room 101. I’ve got a wife and three children. The biggest of them isn’t six years old. You can take the whole lot of them and cut their throats in front of my eyes, and I’ll stand by and watch it. But not room 101! ” Once inside Room 101, you are changed forever, similar to prison. When incarcerated in both, you experience a change from within. You conform to Big Brother and Uncle Sam not because of reason, but for the simple fact that there is nothing left to believe in. In 1984, the teachings of the Party were ingrained into Winston Smith through time and torture. Eleven years ago you created a legend about three men who had been condemned to death for treachery. You pretended that you had seen a piece of paper, which proved them innocent. No such piece of paper ever existed. You invented it, and later you grew to believe in it. You remember now the very moment at which you first invented it. Do you remember that? Yes. ” The Ministry of Love had stripped Winston of all that he believed in. Prison and Room 101 blocked out any truth about reality, diminished any hope to overthrow the Party/U. S. Government, and annihilated any belief that was left.

The end result is a product of Big Brother and Uncle Sam. “everything was all right, the struggle was finished. He had won the victory over himself. He loved Big Brother. ” In short, not much has changed since 1984. Struggle for the truth still lingers on. Acceptance is so eagerly desired. George Orwell emphasized the life of a “sane” human being in a totalitarian world. Consequently, Winston Smith represents all of us. In other words, Winston is the Average Joe. He understood hate, fear, and most importantly love. Without emotion, there is no reason. In the end, he fell victim to society. In 2009, Big Brother is Still Watching You. 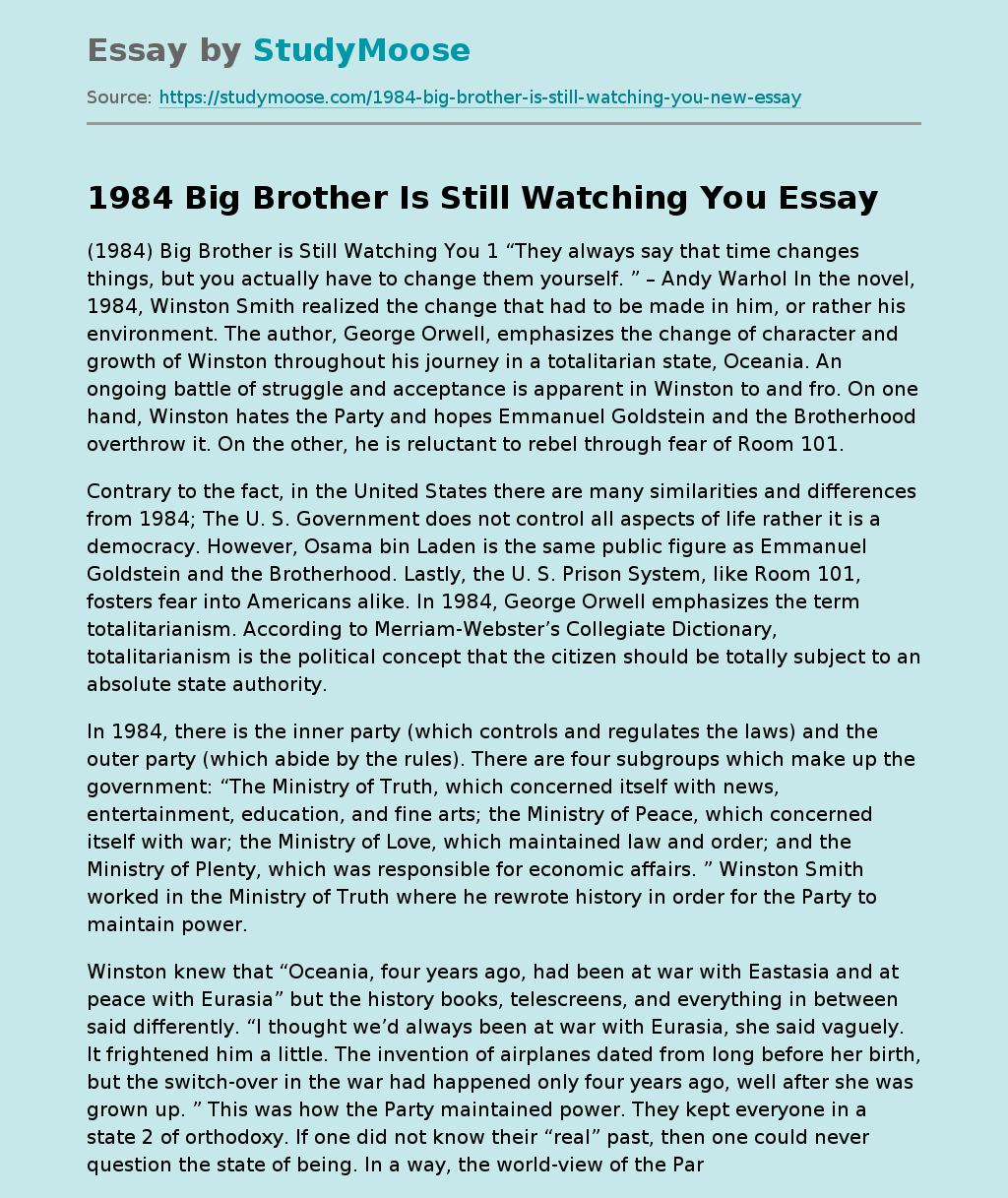