“Still Separate, Still Unequal”, written by Jonathan Kozol, describes the reality of urban public schools and the isolation and segregation the students there face today. Jonathan Kozol illustrates the grim reality of the inequality that African American and Hispanic children face within todays public education system. In this essay, Kozol shows the reader, with alarming statistics and percentages, just how segregated Americas urban schools have become.

He also brings light to the fact that suburban schools, with predominantly white students, are given far better funding and a much higher quality education, than the poverty stricken schools of the urban neighborhoods.

Don't use plagiarized sources. Get your custom essay on
“ Reality of School in Still Separate, Still Unequal ”
Get custom paper
NEW! smart matching with writer

Jonathan Kozol brings our attention to the obvious growing trend of racial segregation within America’s urban and inner city schools. He creates logical support by providing frightening statistics to his claims stemming from his research and observations of different school environments.

He also provides emotional support by sharing the stories and experiences of the teachers and students, as well as maintaining strong credibility with his informative tone throughout the entire essay.

Within this essay, there are many uses of rhetorical appeals including logos, pathos, and ethos. Jonathan Kozol uses reasoning, or logos, to prove that the education systems of today are still as separated and unequal for students based on the color of their skin or their race, as they were 50 years ago.

An example of this is when Kozol informs us of the exact percentages of students by race in schools across the country, “In Chicago 87% of public-school enrolment was black or Hispanic; less than 10% was white.

In Washington D. C. , 94% black or Hispanic; to less than 5% white. In New York City, nearly three quarters of the students were black or Hispanic. ” (Kozol 202) Using statistics and facts really make this issue apparent, and show us just how real this problem in America is.

Another example of this is when he informs us that, “Schools in which as few as 3 or 4 percent of the students may be white or Southeast Asian or of Middle Eastern origin are referred to as ‘diverse’. ”(Kozol 204) In this use of logos, Kozol uses facts to help us understand the sad reality of what society accepts as being diverse, and to show us that there is still segregation within the school system today. Pathos is used in order to link the essay with the reader’s emotions and ethos is used to show the writers oral character.

For example, pathos is used when Kozol speaks to a student of a Bronx high school, “Think of it this way,” said a sixteen-year-old girl. “If people in New York woke up one day and learned that we were gone…how would they feel?… I think they’d be relieved. ” (Kozol 205) This part of the essay really made me feel sad for this girl who lives in a society where she has grown up feeling like now one cares about her or others of her race.

Kozol also shows us letters he has received from young elementary school children trying to understand why they do not have the same luxuries other children in wealthier school districts have, and why they do not have basic needs such as toiletries. Pathos is used within this essay to convey the sorrow of these students’ situations. For example, when he speaks of a letter written by an eight year old girl named Elizabeth, “It is not fair that other kids have a garden and new things. But we don’t have that. (Kozol 206)

There is a deep amount of sadness from the tone of this little girl’s letter, which me feel empathy for this child, creating the urge of wanting to rectify the problem of inequality. In addition to pathos, Kozol uses ethos when he speaks of a new approach to teaching that is only being used in urban and poverty stricken schools. It is called the Skinnerian approach, “which are commonly employed in penal institutions and drug-rehabilitations” (Kozol 209). He defines this approach as “proponents of scripted rote-and-drill curricula” (Kozol 209).

He also describes it as “a way of altering the attitudes and learning styles of black and Hispanic children” (Kozol 209). Kozol gives credibility and enlightens his readers on these new teaching practices that are threatening a whole generation of Americans, and shows us that this is happening in our own country, and right before our very eyes. Both pathos and ethos are used when Kozol speaks to a principal of a South Bronx school while they were looking at a collapsed section of the ceiling, which was covered by a garbage bag, “This…would not happen to white children. (Kozol 2)

This use of pathos really affected me as a reader, and gave me a strong urge to want to help the school system, especially since I have a young daughter that will be starting school in a few years, and his use of ethos really makes me believe what he is saying, because of his credibility and tone. Some other rhetorical techniques Kozol uses are repetition, tone and imagery. Repetition is used in this essay when he speaks of the conversation that happened between two high school students s they are talking about the different types of classes they are “required” to take, “You’re ghetto…so we send you to the factory” and “You’re ghetto so you sew! ” (Kozol 216) Kozol does this on order to show us how the school curriculum doesn’t allow the students the opportunity reach their full potential. Kozol uses logos to show us that the students that come from urban city schools are not given the same opportunities as wealthier schools, instead they are forced to take classes that will not give them the skills they need for a career that will offer them more than just minimum wage.

Imagery and pathos is used to describe the unfathomable conditions of the school buildings, and lack of basic needs, when Kozol describes a South Bronx school, “I had made repeated visits to a high school where a stream of water flowed down one of the main stairwells on a rainy afternoon and where green fungus molds were growing in the office where the students went for counseling. (Kozol 207) By providing these types of details, Kozol really puts us into the shoes of the young children, and he paints a vivid picture of the horrible conditions these children endure every day. This essay had a very strong effect on me personally and emotionally. Shouldn’t we be sending our children to diverse schools to teach them how the real world actually is? The world is diverse with multiple races and backgrounds. Don’t all children deserve the same educational opportunities, and shouldn’t every child have a decent place to go to school?

When looking at the argument that Kozol makes, he shows us that the achievement gap between predominantly white and minority schools is widening, and after reading the statistics and the information that he presents in this essay, I can’t help but agree. His points above, that I have stated, prove that great limits are set for the success of minority students. It is no wonder why the dropout rate for these students is so high. 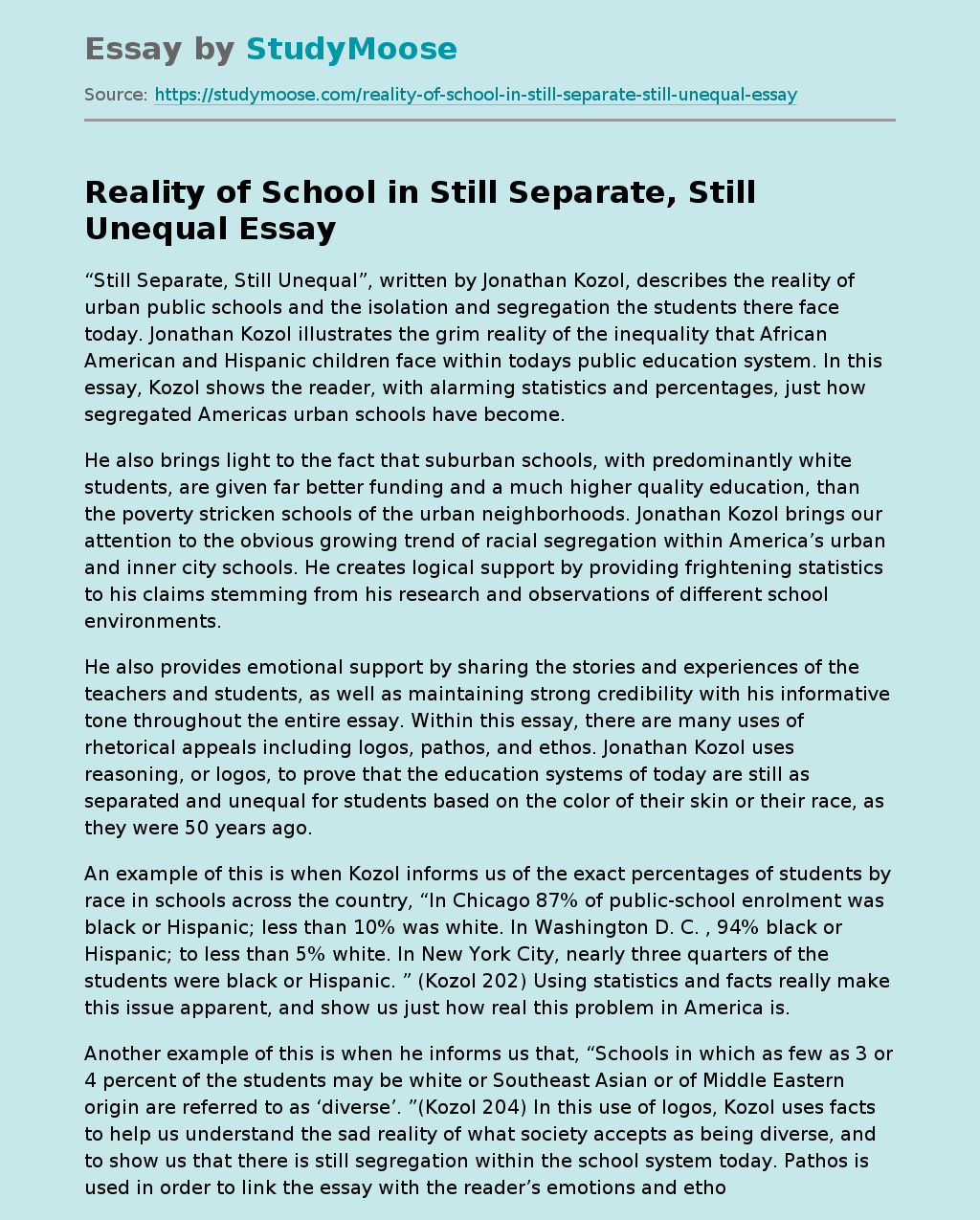