Analysis of Pivotal Moment in "A Separate Peace"

The book, “A Separate Peace” by John Knowles is a coming of age story of two best friends, Gene and Finny. Although the story is told through Gene’s point of view, his perception of Finny is most important as Finny develops psychologically throughout the book. A pivotal moment in Finny’s psychological development is Brinker’s investigation in Chapter 11, when Finny finally acknowledges it was Gene who pushed him and this changes Finny’s innocent view of the world.

Finny sees everyone how he wants to see them, assuming the world is a fundamentally friendly place.

Don't use plagiarized sources. Get your custom essay on
“ Analysis of Pivotal Moment in “A Separate Peace” ”
Get custom paper
NEW! smart matching with writer

In life he always thinks the best of people and counts no one as his enemy, just as he dislikes games with winners and losers. Blitzball, the game he invents where everyone competes furiously but no one wins, shows Finny’s attitude toward life. According to Gene, these qualities make Finny unique. But, Finny’s inability to see others as hostile is his weakness as well as his strength; he refuses to believe any dark motives toward Gene.

Finny’s naïve mindset makes him assume that everyone thinks like he does. This carefree, self-absorbed attitude is one of the roots of Gene’s jealousy of Finny, although Finny, aware only of himself and seeing the good in others, never seems to pick up on Gene’s inner turmoil.

Gene’s resentment of his best friend caused him to hold dark, unspoken feelings toward Finny which led him to push Finny off of the tree, making him unable to play sports, his most notable skill.

But of course Finny, seeing the best in everyone, refuses to even think that his best friend could have caused the accident. When Gene tries to confess that it was his fault for the accident, Finny refuses to talk about what he doesn’t want to hear. Getting upset at Gene, Finnt tells him, “If you don’t shut up, I’ll kill you.” However, Brinker’s investigation in chapter 11 shows Finny’s psychological transition when he is finally able to listen to what he doesn’t want to hear. The first time Gene tried to confess that it was his fault; Finny immediately gets upset and simply won’t talk about it. On the other hand, Brinker/s trial forces Finny to accept the truth and illustrates Finny’s psychological development, considering Finny doesn’t react like he did the first time Gene tried to talk about the fall. It takes Finny longer to get angry, and he is more tolerant to talk about the accident.

When Brinker asked Finny if he had ever considered that he didn’t just fall out of the tree, implying that someone pushed him, Gene describes Finny’s reaction as it “touched an interesting point Phineas had been turning over in his mind for a long time. I could tell that because his obstinate, competitive look left his face as his mind became engaged for the first time.” (Pg.169) Finny is then open to talking about the accident and it takes him much longer to get upset than it did the first time. Once Leper told the truth about the fall, Finny became upset again as “The words shocked Phineas into awareness.” (Pg.177) Finny’s mindset shifts from seeing a world with no wrong to an understanding, less naïve view.

Analysis of Pivotal Moment in "A Separate Peace". (2016, Mar 24). Retrieved from https://studymoose.com/analysis-of-pivotal-moment-in-a-separate-peace-essay 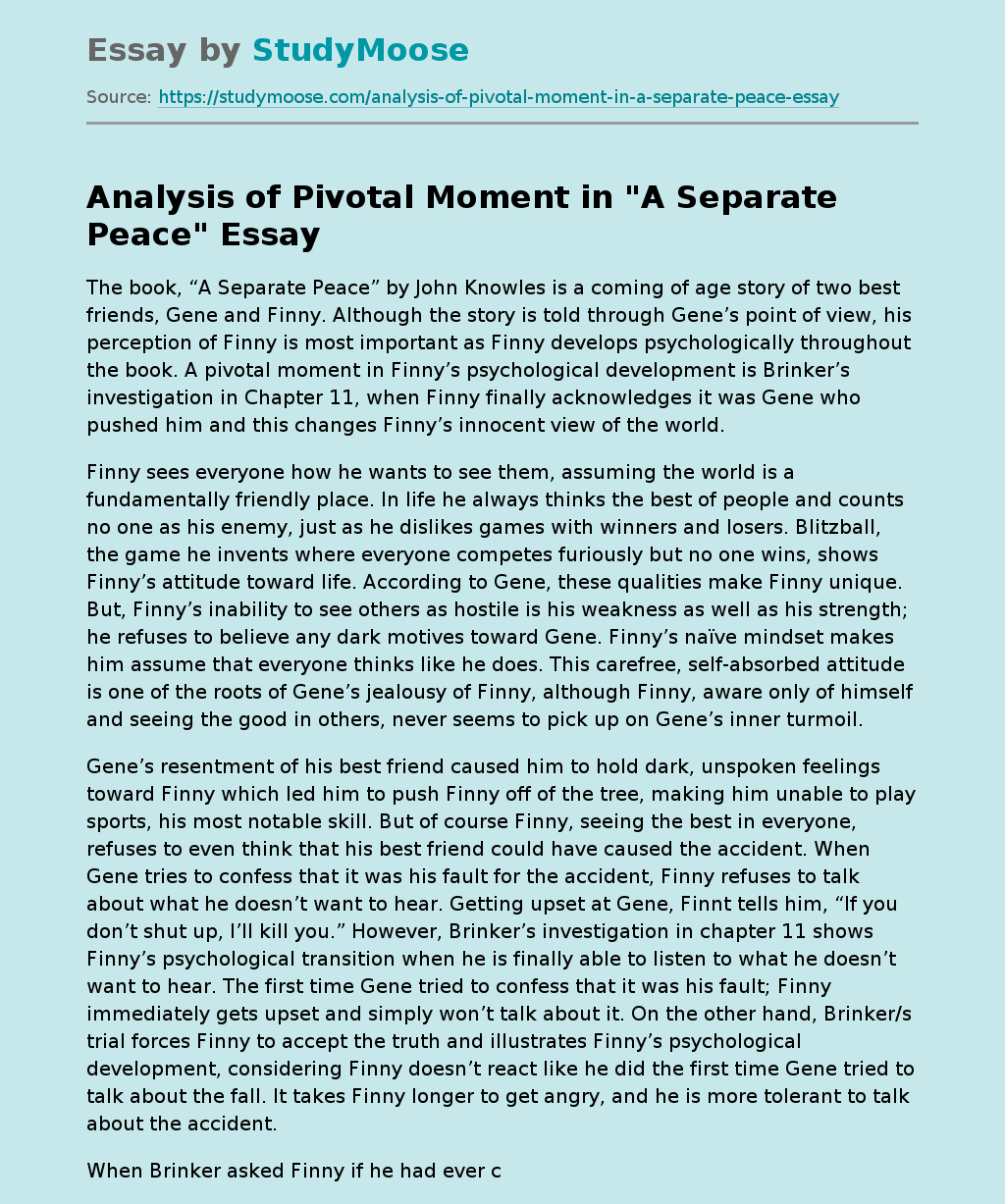