?Separate Pasts, Growing Up White in the Segregated South

Separate Pasts is an award winning novel written by Melton A. McLaurin that delves into the 1950s era where racism was evident around each corner. McLaurin honestly explores the relationships he had with his fellow white peers as well as the African Americans during his childhood in the southern United States. This novel was a moving tale that examined the racist times that plagued our vast history. McLaurin did not understand at a young age how much race played a part in life, but had the decency to be kind hearted to each person he encountered, regardless of their ethnicity.

Don’t waste time
Get a verified writer to help you with ?Separate Pasts, Growing Up White in the Segregated South
Hire verified writer
$35.80 for a 2-page paper

Throughout the book, McLaurin discussed how segregated the tiny town of Wade was and how the blacks would never be deemed equal to the whites, regardless of their hard work or honesty. I believe that McLaurin adequately proves that Wade was a town divided entirely upon race and social economic status.

McLaurin struggled as he crossed the threshold from boyhood into manhood, especially in terms of dealing with the blacks in the tiny town of Wade.

In the beginning of the novel, McLaurin talks about how he experienced his first realization of how he was different than his fellow black peers. McLaurin started playing a pickup game of basketball with the white and black children in the neighborhood.

The children paid no mind to color when it came to sports, but especially during their youth. McLaurin headed to his grandfathers shop to put air in the second hand basketball they tended to play with.

He brought along two of the black players because filling up a basketball with air was more than a one man project. McLaurin was frustrated after his friend Bobo failed to fill the ball with enough air once he put the needle that was required into his mouth. McLaurin placed the same needle in his mouth and was instantly overcome with emotion.

“The realization transformed my prejudices into a physically painful experience. Such actions violated my racial purity. It threatened me with germs which, everyone said, were common among blacks (37). This statement alone shows that McLaurin did not have any qualms playing with boys of color, but swapping saliva with them proved to be unbearable. This is a small example of how segregation raged through this town. McLaurin tried to hide his thoughts, but they still raged through him. This shows that as the children in Wade grew up, they knew that whites were superior, but they could not pinpoint the exact rationale behind those thoughts. As the book continues on, McLaurin encounters several experiences that show how this town was separate, and nowhere near equal.

In today’s day and age, interracial relationships are considered normal, but during the 1950s, it was frowned upon. The book says these relationships were discussed, “sometimes humorously, sometimes with fear, sometimes with loathing (66).” This statement goes to show that white males interacting with black females and vice versa was not something the town wanted to happen. While there is no denying that sexual interactions occurred between the two races (which was evident by the biracial offspring), McLaurin spoke about how these instances wound up being the gossip in the town.

McLaurin told a story of how a white man had a sneaking suspicion that his wife was sleeping with a black man. The husband caught them in bed one day and killed both of them with a shotgun. Obviously the husband was guilty of committing two murders, but he was found not guilty. McLaurin mentioned that everyone predicted the husbands acquittal, and the town was certainly surprised that case even went to court. This shows that sleeping with a black man enabled a white man to kill him and get away scotch free. If the roles were reversed and it was a black husband, the outcome would have been quite different. McLaurin continued to age and began to develop relationships with blacks and whites alike in the community.

“If God intended for niggers and whites to mix, he would have made them all the same color (89).” This bold statement was one that McLaurin frequently heard, especially after the Brown vs Board of Education court decision came about in the early 1950s. This was the mentality that the vast majority of the population in Wade carried with them. Racism would most likely still exist in a different form if the entire population was the same color. History has shown that racism occurs even between the same race and ethnicity. Segregation and racism has gone hand in hand for centuries and will continue to affect the population for years to come. History also shows that children tend to take on the beliefs of their parents and rarely question them.

This was the same during this time period. McLaurin said that, “Public disagreement with one’s elders was rarely tolerated.” In a way, the children of this era were forced to continue on with segregation beliefs of their parents. The youth of this community had a hard time determining what was right versus what was easy. It was easy to continue on with the hatred and belief that whites were superior. The right thing to do would have been to realize that blacks were human beings and should have been treated with just as much respect. It has taken decades to get to the point in life where children are raised without prejudices, but sadly, this country still has a long ways to go before segregation is no longer seen in any context.

McLaurin also spoke about how the seating in the automobile was a glaring and troublesome reminder of the segregated times. “Racial custom required that adult blacks of the opposite sex occupy the back seat of an automobile driven by a white adult (91).” McLaurin was a young driver and had a difficult time trying to figure out who should sit where when he was driving. McLaurin was not fully an adult male, so the rules were slightly blurry.

This dilemma shows that where one sits in a car was important during the 1950s and actually required thought and reasoning. Today, cars are filled with mixed races and there is not an unspoken rule about where a black male or female must sit inside a car. McLaurin struggled with many races related issues in the book, especially because he was not technically a grown man. He preferred to be called boy as opposed to mister and that stuck with him even after he went off to college and came home. McLaurin did not want to be treated as a high and mighty white male because he did not see himself in that light. He was no better than the blacks and it helped that he was exposed to a wide variety of the black community for his entire life. He took the time to get to know their stories and empathized with them.

While McLaurin would never be a black male in society, he slowly but surely began to understand their struggle and realize that they had souls just like his white counterparts. McLaurin’s core values were primarily shaped by his Grandfather because he spent the majority of his youth working at his corner store. McLaurin’s Grandfather was still a racist man and saw himself as better than the blacks, but he started to make strides when it came to racism and segregation in this mile long town.

If the black family was too far in debt or he doubted their ability to pay back the money the owed, Grandfather would tell the family “No,” and leave it at that. He did not break his back to help anyone even though he knew the majority of the blacks in town were illiterate and there were very few jobs that would employ people of race. McLaurin was overly impressed with how his grandfather treated a woman named Viny Love. She was a single mother to a severely disfigured boy.

She worked the field with all of the men and tried to do the right things by her son. Viny got behind on her payments and went to McLaurins grandfather for help with getting welfare. McLaurin told the man in charge of welfare for their town to come c to take a look at this struggling black family. Sadly, Viny’s case was not taken very seriously and she continued to fall further behind on her payments. McLaurin’s grandfather came to the rescue and took Viny, her son, McLaurin, and a boy named Theo into town to venture to the welfare office. Grandfather was a very stern man and did not take no for an answer. This unexpected show of compassion proved that while the town remained segregated, things were slowly but surely improving for the better. McLaurin struggled while growing up in this town because he wanted to be different but was held back by the backwards way the elders in the town thought. It did not help that their town was no industrialized, so it took many, many years to see any changes in Wade.

Overall, Separate Pasts was a novel that told the true story about a young white male growing up in a very segregated town during the 1950s. McLaurin was confused throughout his childhood about whether or not the whites had any reason to be held on a pedestal when compared to black men and women. McLaurin painted a very vivid picture with a wide variety of stories that proved how separate this town truly was. The book did not leave the reader with any doubts about how Wade was nowhere near deemed equal and would not be for several years after.

I think this book was an excellent read and really allowed me to get a glimpse inside a world that I will never live in. It is saddening to think about how the majority of books from this time were written by whites, because very few blacks were literate. It would be interesting to read a book that was told from the African American point of view and see just how terrible they felt simply because how the treatment they received from their white neighbors.

There are two sides to every story, and I am intrigued to find out the other side of this story. Did McLaurin truly treat the blacks with the dignity and respect they deserved? Or did the blacks in this town still feel like they were less. This book has true historic value because it was a non fiction novel written about a time in our history that I would not be proud to live in. Our nation has come so far since those days, but there is still work to be done. I cannot wait until my grandchildren are reading novels about my childhood and see how far the world will go once we break down those segregation barriers that hold us back.

?Separate Pasts, Growing Up White in the Segregated South. (2016, May 07). Retrieved from http://studymoose.com/separate-pasts-growing-up-white-in-the-segregated-south-essay 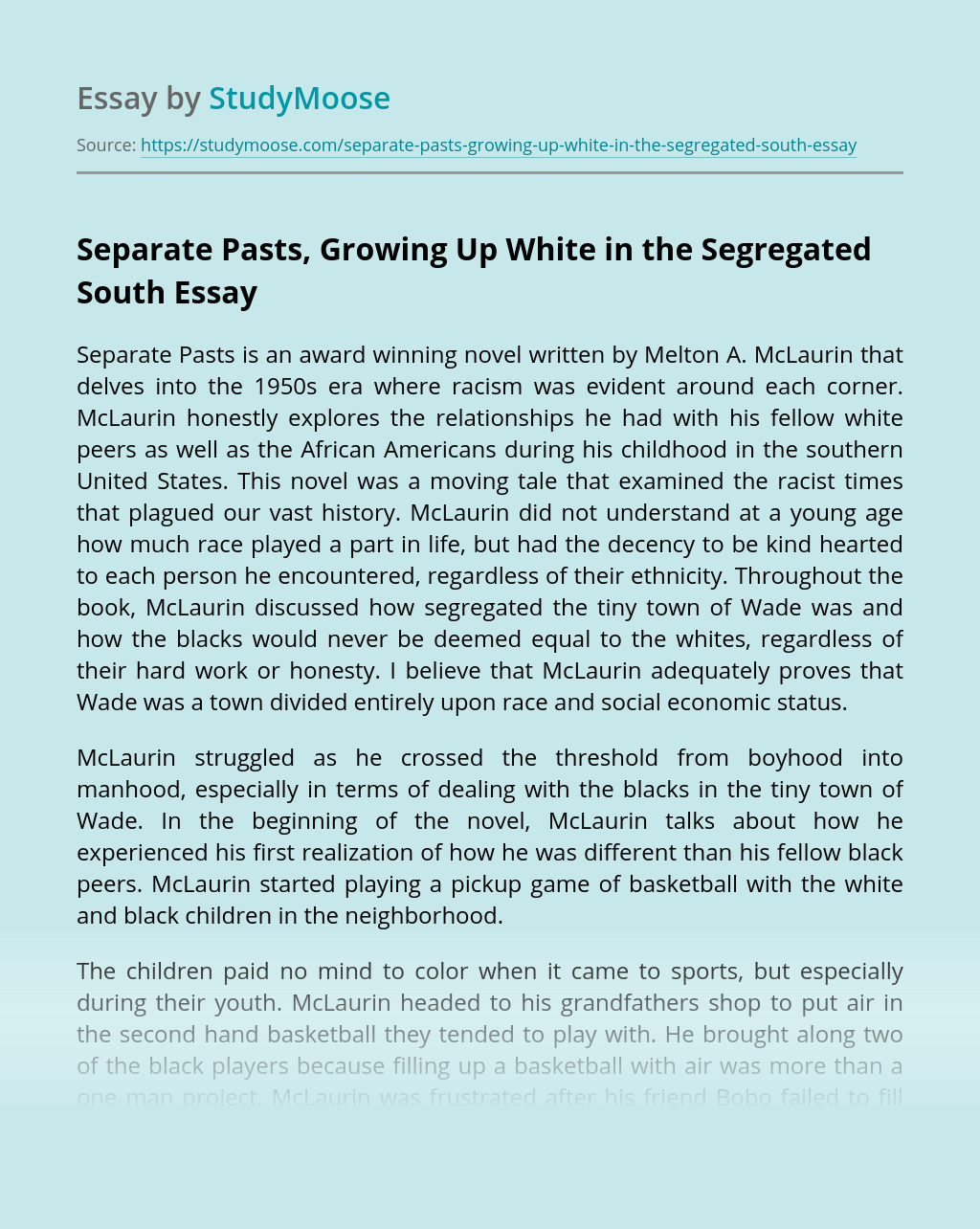 Don’t waste time
Get a verified writer to help you with ?Separate Pasts, Growing Up White in the Segregated South
Hire verified writer
$35.80 for a 2-page paper
Stay Safe, Stay Original