The Role of Media and the Central Park Five

In 1989, five black boys in New York City, known as the Central Park Five, were accused and convicted of gang rape of a white women one night deep with in Central Park. Immediately the story received a large amount of media coverage. No one is safe, these four words came about instilling fear in NYC residents and placing the Five into the spotlight. The role of the media in this case, before and after their status as guilty was removed, was to heighten the climate of fear, contribute to an increase in racial tensions and, to demonstrate the presence of the white entitlement mindset.

Don't use plagiarized sources. Get your custom essay on
“ The Role of Media and the Central Park Five ”
Get custom paper
NEW! smart matching with writer

While 1989 is well after the Civil Rights movement and should, theoretically, have been a less racist society, the US citizens retained stereotypical views. With using language like “Nightmare in Central Park”, “Teen Wolf pack Beats and Rapes…” and the use of “wildling” to describe their actions, the media painted the case and the suspects, five young boys, quite similarly as the boys accused in the Scottsboro trials were.

The word “savage” transcended the more than 50 years between each case thanks to the coverage. These descriptors heightened fear among the citizens in New York, setting them on the boys with a passion. The focus on the Central Park Five was like gasoline to a fire. With tensions already high, fear already present, the headlines in the media caused an outburst in conflict, setting back social progress so many had fought for. The fact that that victim was a middle class white women played on the past stigma that black man lusted after white women uncontrollably, something that people, mostly white, took issue with.

In the end, even after the actual perpetrator, Reyes Matias, stepped forward, the media, through lack of coverage, proved how far society still had to go. The amount of attention the trial and incarceration received shows that people wanted to see black men go to jail for the rape and abuse of a white woman more so than seeing justice received. Even the prosecutor, to this day, denies that their innocence is real. No one is safe. These four words, simple as they are, hold so much. They enforced a fear of black men. They pushed for the incarceration of five young, innocent, boys. With these four words the media can change lives. For the Five, the media was a crucial factor in sealing their fate. The amount of coverage and then the lack thereof exemplifies the media’s role in enforcing stereotypes, increasing tensions, and heightening fear.

The Role of Media and the Central Park Five. (2016, Sep 11). Retrieved from https://studymoose.com/the-role-of-media-and-the-central-park-five-essay 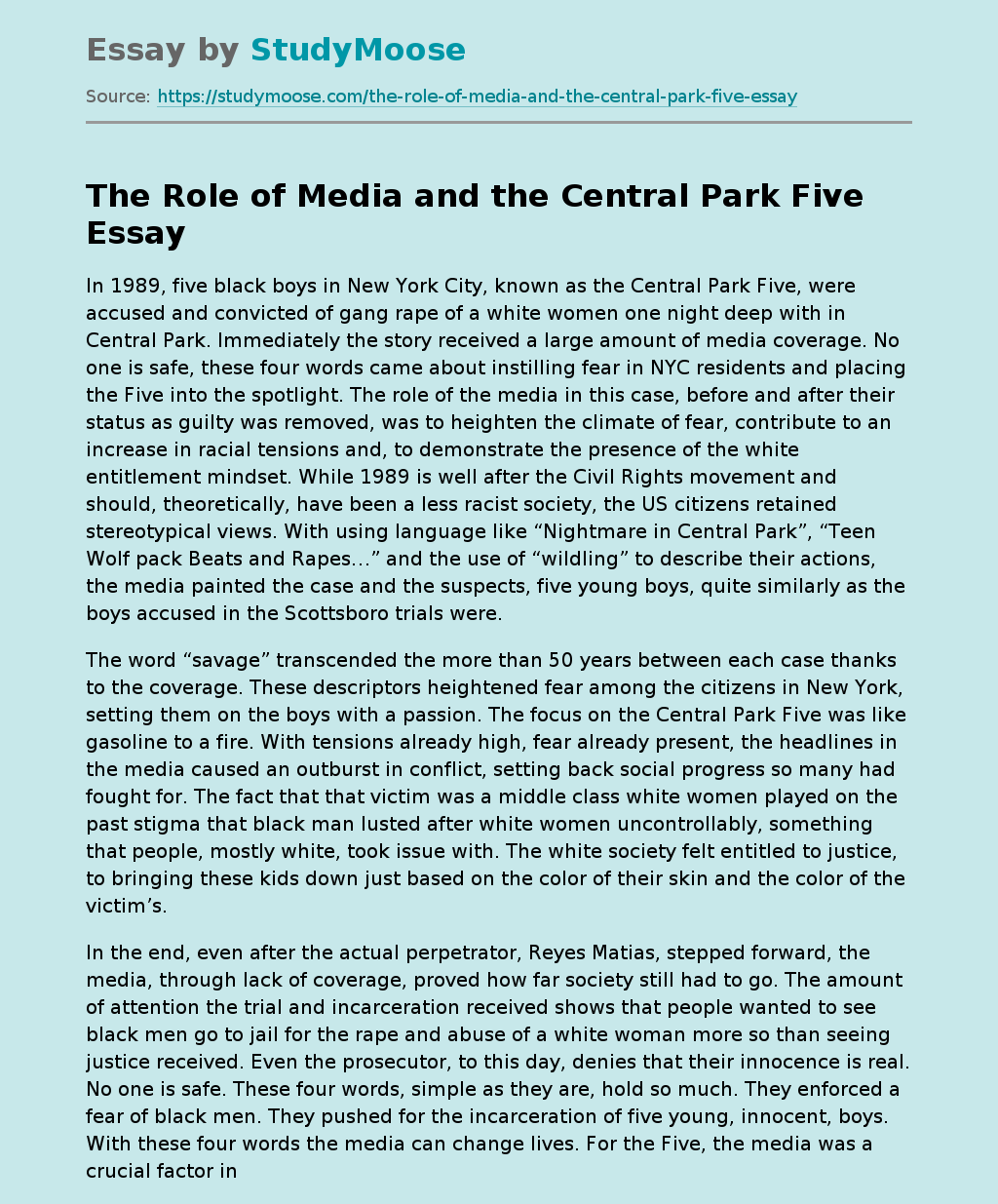