Tashkent is the capital of Uzbekistan and the largest city in Central Asia. Tashkent lies in the northeastern part of the country. The city probably dates from the 2nd or the 1st century bc and was variously known as Chachkent, Shashkent, and Binkent; the name Tashkent, which means “Stone Village” in Uzbek, was first mentioned in the 11th century. An important centre of trade and handicrafts on the caravan routes to Europe and East Asia, When it was captured by the Russians in 1865, it was a walled city of some 70,000 inhabitants and already a leading centre of trade with Russia.

Don't use plagiarized sources.
Get Your Custom Essay on Tashkent Just from $13,9/Page

In 1867 it was made the administrative centre of the new governorate-general of Turkistan, and a new European city grew up beside the old native one. Soviet rule was established by Russian colonists in November 1917 after an armed uprising.

S.S.R. The capital was transferred to Tashkent in 1930. The officially registered population of the city in 2006 was 2.1 million. Today Tashkent is the main economic and cultural centre of Central Asia. Cotton is the chief crop of the region in which it is situated. Wheat, rice, jute, vegetables, and melons are also grown, and silkworms are bred. The city lies in the most industrially developed part of Uzbekistan, and much of its industry is in some way connected with cotton—the manufacture of agricultural and textile machinery and of cotton textiles. It also has various food-processing industries.

The city’s numerous institutions of higher education and research establishments include the university, founded in 1920, and various institutes of the Uzbek Academy of Sciences, set up in 1943. A lso notable is the Navoi Public Library. The city’s numerous theatres, Uzbek and Russian, include the Navoi Theatre of Opera and Ballet. There are also a Palace of the Arts and several museums, parks, and stadiums. The city has been extensively rebuilt since an earthquake in 1966 left 300,000 people homeless. 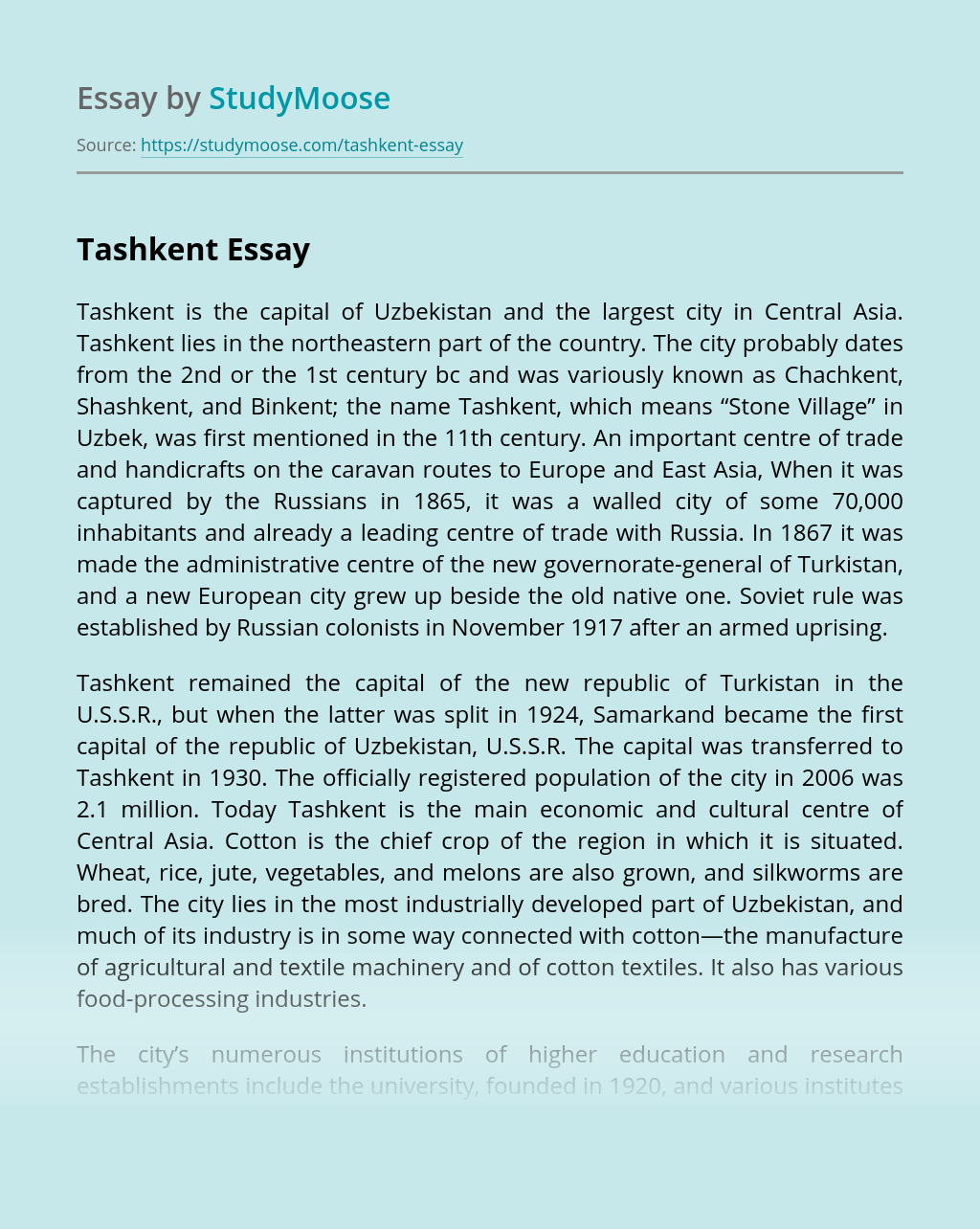 The Problems Faced By Students In Malaysia

Education in Malaysia is an on-going effort towards further developing the potential of individuals in a holistic and integrated manner, so as to generate individuals who are intellectually, spiritually, emotionally and physically balanced and harmonious, based on the belief and devotion to God. An effort is designed to yield Malaysian citizens who are knowledgeable and...

Ai Identify four different reasons why people communicate Making and developing relationships People communicate to make new relationships. The way I first speak and listen to a newcomer can make them feel welcome or overlooked. As I speak or comment, listen and watch, take an interest, smile and nod, whether to a service user, a...

Reflection: This kind of article is somewhat made to be funny upon criticism although some of his statements are true but need adequate citation of example. The author’s points are thoughts of a typical charlatan English 101 passer that wants to show off his talent in composition of proses like this one. Nevertheless, I will...

The global spread of English over the last 50 years is remarkable. It is unprecedented in several ways: by the increasing number of users of the language, by its depth of permeation [“pE:mI’eISn] into societies and its range of functions. There is a model consisting of 3 circles proposed by B.B. Kachru in 1982 in...

Communication can be hard when people speak different languages or use sign language, and it can become frustrating when you don’t understand what a person is saying. Barriers can occur when people find it hard to pass on or receive information because of impairment such as being death or bind which is quite common impairments....