An Analysis of Three Short Stories and Their Central Theme

Throughout time, one of the most interesting social structures that is worth studying or analyzing would be the family. Needless to say, family plays a very important role in society-building since this is where all of us are able to find our respective identities. The three extraordinary works presented in this analysis will focus on the issue of family disharmony as well as the role of women in society during the earlier days of modern civilization. This particular analysis will look at three literary masterpieces crafted into perfection by three of the most distinguished women writers of our time:  “Women Hollering Creek” by Sandra Cisnerno, “Everyday Use” by Alice Walker, and “Revolt of a Mother” by Mary E.

Don't use plagiarized sources. Get your custom essay on
“ An Analysis of Three Short Stories and Their Central Theme ”
Get custom paper
NEW! smart matching with writer

“Woman Hollering Creek” was first published in Sandra Cisneros’s 1991 collection of short stories, Woman Hollering Creek and Other Stories. The short story basically describes the lives of Mexicans who have crossed the border to live on ”el otro lado” (376) — the other side—in the American Southwest.

The main character in the story is Cleofilas, who is trapped in a constricting, culturally assigned gender role due to her linguistic isolation, violent marriage, and poverty.

The author successfully weaves allusion to women in Mexican history and folklore –representing the same alienation and struggle being experienced by many women across the borders. As noted by one of the characters in the short story, Felice, there is clearly an existing domination of man over women in the culture they are in, and she goes about by noting “Did you ever notice how nothing around here is named after a woman? Really.

From this statement by Felice, we can see how lowly women are treated in the family structure.  Furthermore, it would appear from this statement that women are only valued that time based on certain physical qualifications (i.e. virginity) and not by their intrinsic value to the family. In this particular story, one striking point is the strong depiction of the author of a woman struggling to free herself from normal romantic expectations regarding domestic stability by choosing to leave her husband and finding herself in the process.

The fact that the main character finds the strength to leave her family is a clear indication that family disharmony was very much existent in their home. The unequal treatment of women and the rigid gender structures at that time were clearly too much for the main character that she opted to break free from all these.  In fact, in one scene, Cleofilas laments the situation of women and the limited choices they have during her time saying “Tu o nadie. Somehow one ought to live one’s life like that, don’t you think?  You or no one.  Because to suffer for love is good.  The pain all sweet somehow.  In the end.” (377)

In the short story “Everyday Use” by Alice Walker, the author basically tells the story of a mother’s conflicted relationship with her two daughters – a common scenario for any family, past or present. The issue of generation gap is clearly indicated in this story where the mother tries to explain to her two daughters the significance and representation of a particular quilt. What is an important piece of cloth to her is clearly nothing much to her two daughters, thus, creating family disharmony.

As with many other stories by Walker, “Everyday Use” is narrated by the unrefined voice of a rural black woman, in the author’s attempt to give a voice to a traditionally disenfranchised segment of the population. Mama describes herself as a large, big-boned woman with rough, man-working hands.  “In the winter I wear flannel nightgowns to bed and overalls during the day.  I can kill and clean a hog as mercilessly as a man” (35). This description, along with her reference to a second grade education makes the reader understand that the main character takes pride in the practical aspects of her nature and that she has not spent a great deal of time contemplating abstract concepts such as heritage.

However, her lack of education and refinement does not prevent her from having an inherent understanding of heritage based on her love and respect for those who came before her.  This is clear from her ability to associate pieces of fabric in two quilts with the people whose clothes they had been cut from: “In both of them were scraps of dresses Grandma Dee had worn fifty and more years ago.  Bits and pieces of Grandpa Jarrell’s Paisley shirts.  And one teeny faded blue piece, about the size of a penny matchbox, that was from Great Grandpa Ezra’s uniform that he wore in the Civil War.” (40) The quilts have a special meaning to Mama.  When she moves up to touch the quilts, she is reaching out to touch the people whom the quilts represent.

One of the most important themes in ‘‘The Revolt of ‘Mother’’’ is the distinction and reversal of traditional gender roles. Sarah’s initial acceptance of Adoniram’s building of the barn, despite his 40-year-old promise of building her a house on that spot, shows the prevalent belief that her duty is to follow her husband.

Though Sarah does express her feelings to her husband, when he refuses to speak about the matter, she lets the subject drop, and the barn goes up. Adoniram’s refusal to truly listen to Sarah’s concerns throughout the story are clearly shown in his last words: ‘‘Why, mother, I hadn’t no idea you was so set on’t as all this comes to.’’(12) Throughout the story, Sarah has tried to explain her feelings but, Adoniram is not accustomed to listening to his wife – as per the custom during those times.

Just like the two earlier short stories, “Revolt of a Mother” by Mary E. Freeman also touches on the role of women in small New England towns during the late 19th century. In this particular story, Freeman’s emphasis lies more with the oppression and rebellion of women. She portrays the main character as insistent on receiving equal treatment from her husband –clearly conveying women’s lack of power during those times. In fine, this particular story focuses on the struggle of women everywhere to reach out and make her presence felt to the society she is living in, especially in the family where she is part of. I believe every woman would feel frustrated with the treatment being given to the protagonist in this particular story since she is practically ignored by her husband.

These three short stories enable us to see how the family structure works during the periods covered in each. Unlike the structure that we have right now, it would appear that the role that each one plays in the family is dependent on two important factors: gender and seniority. Obviously, discord was evident in each of the relationships presented because of the rigidity of the family structure during this period. Women were not given much room to assert their rights and children were often expected to carry out the wishes of their parents regardless of their own beliefs or opinion.

The three stories are also very noteworthy because they focus on the role of women in society. Women have always been viewed as the weaker sex, but as the three short stories prove, women are far more resilient than many male chauvinists would give credit for. In fact, the role of women has evolved over the past few centuries and gender roles have evolved quite dramatically over the past few years. Whereas the female characters in the three short stories are confined by the limitations of their gender, the modern woman now faces a myriad of opportunities waiting for her.

I believe that reading stories such as the three classics mentioned above are very poignant in the sense that they allow us to see how far we have come in terms of accepting women and the very important role they play in the development of the society. As they always say, behind every successful man, is an even more successful woman.

An Analysis of Three Short Stories and Their Central Theme. (2017, Mar 13). Retrieved from http://studymoose.com/an-analysis-of-three-short-stories-and-their-central-theme-essay 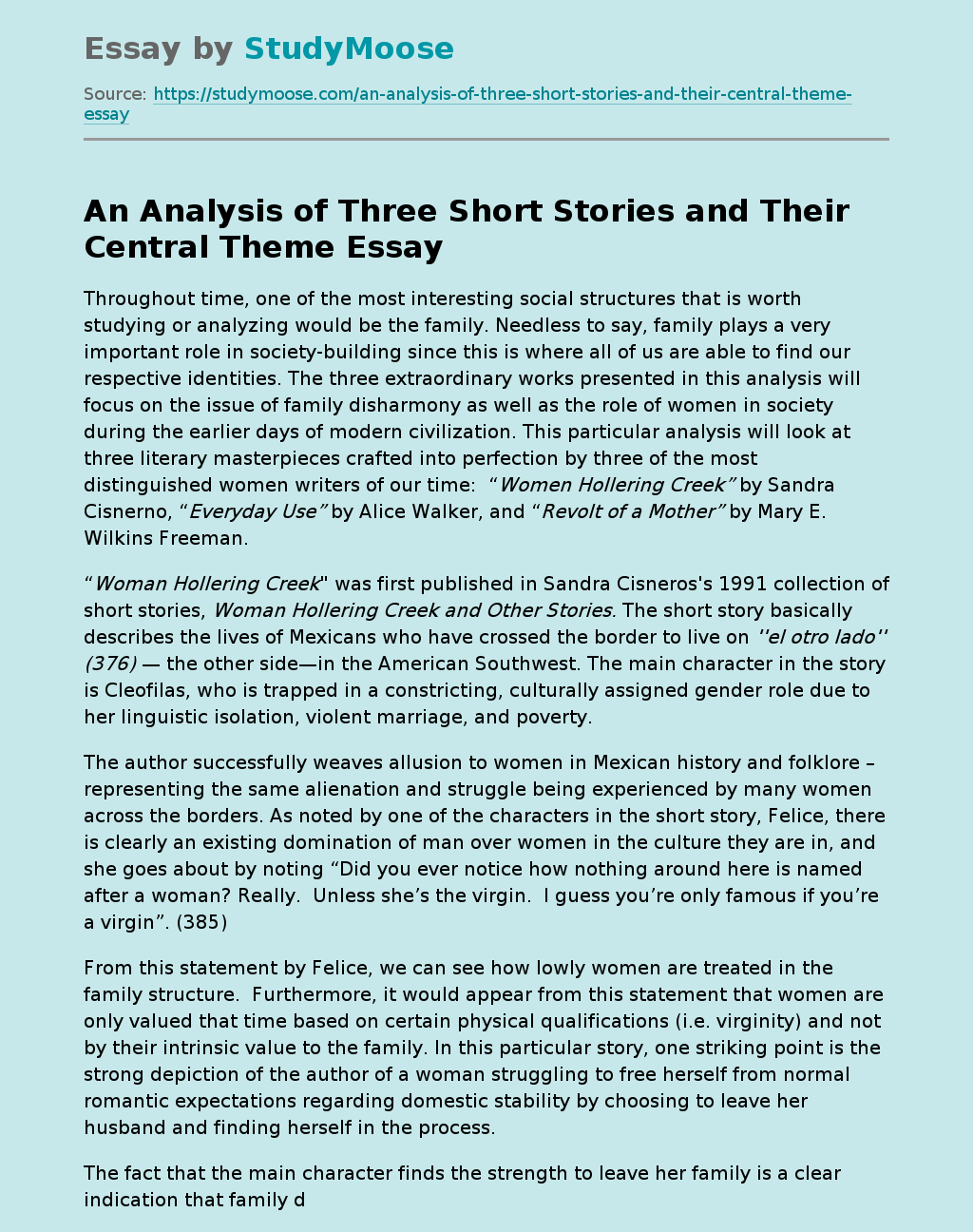