It seemed to me that she deserved everything it all. ” In the first quote the use of ‘either or ‘ shows that Larry is determined. Also in the first quote ‘I didn’t want to drink from Mother’s saucer’ although it is meant literally it can also be seen as a metaphor, which shows that the speech has been prepared and that therefore Larry’s feelings of jealousy run deep. In the second quote Larry’s feelings are against his mother, he sounds spiteful towards her when he realises that she has caused his deep feelings of jealousy.

Don't use plagiarized sources. Get your custom essay on
“ My Oedipus Complex ”
Get custom paper
NEW! smart matching with writer

In ‘The Half Brothers’ there are also elements of jealousy in the family relationships. For example William Preston is jealous of Gregory, “he took a positive dislike to Gregory – he was so jealous of the ready love that always gushed out like a spring of fresh water when he came near. ” This quotation shows the complexity of the character relationships in the story very well by using a simile.

In this way the story mirrors real life therefore making it easier for the reader to relate to. The plots of the two stories have both similarities and differences.

For example a similarity would be the beginning of the stories because both the narrators have a parent missing, although under different circumstances, however they end differently. The differences in the stories make it more interesting for the reader to compare them. They would obviously have some differences as they were written in different periods by different authors and set in different times.

The settings are both similar and different. For example ‘The Half Brothers’ is set in Cumberland in Victorian times and ‘My Oedipus Complex’ is set in Ireland just after the First World War.

These settings appear to be very different but are set in the countryside, which gives them a similar rustic charm. Both stories have similar elements in their settings. Time is the major difference to the changed setting not location. The settings of the stories make the reader respond in different ways. For example a lot of readers feel more comfortable reading stories set in recent times because they can relate to them. This is because of more modern language and issues. For this reason many readers may prefer ‘My Oedipus Complex’ to ‘The Half Brothers’ as it is set more recently.

For example “Ours was the only house in the terrace without a new baby, and Mother said we couldn’t afford one till Father came back from the war because they cost seventeen and six. That showed how simple she was. The Geneys up the road had a baby, and everyone knew they couldn’t afford seventeen and six. It was probably a cheap baby, and Mother wanted something really good, but I felt she was too exclusive. The Geneys baby would have done us fine. ” This humour is mocking to the narrator. This quotation shows that he really has no idea on the science of life but he talks as if he knows everything.

This is highly amusing to the reader. A similarity between the two stories is that in both, people learn something. For example in ‘My Oedipus Complex’ Larry and his father both learn that they shouldn’t fight each other, they learn to forgive each other and in ‘The Half Brothers’ William Preston learns that he should have treated Gregory more fairly the narrator also learns from his fathers mistakes. This shows that the moral of both stories is forgiveness. These stories can help readers because they can identify with the experiences of the narrators. The stories have different styles, however both use a lot of descriptive language.

For example similes are used in both stories, “it was like going for a walk with a mountain” in ‘My Oedipus Complex’ and “that always gushed out like a spring of fresh water” in ‘The Half Brothers’. The use of similes makes the language richer and more enjoyable to read. It also gives the reader a better image in their mind of the thing the author is trying to describe. Both authors also use adjectives but Elizabeth Gaskell uses them especially well by repeating them. For example “thicker thicker – faster faster”. This repetition gives the words a more urgent and panicked feel. It is very effective in drawing the reader into the story. 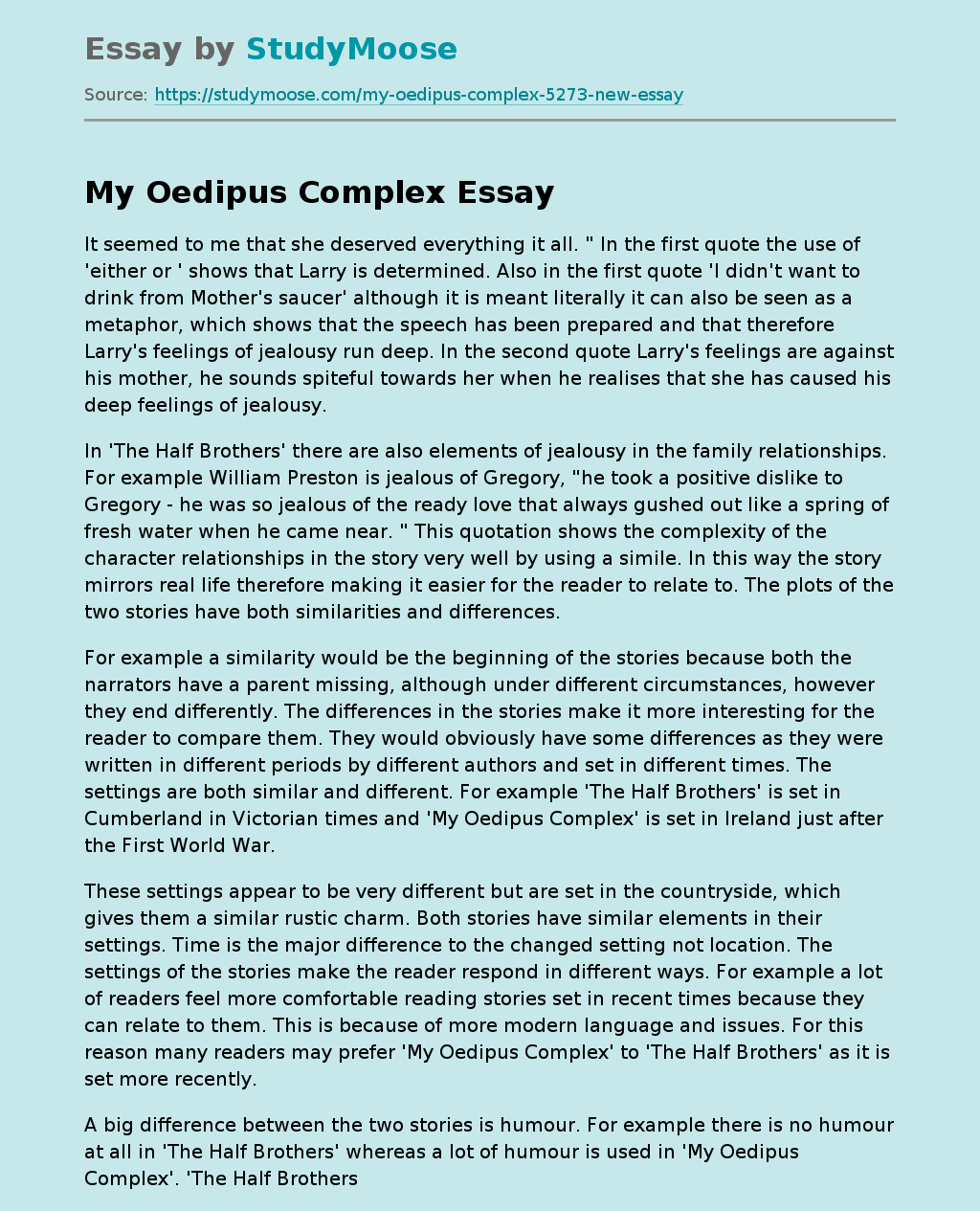