The history of basketball

Basketball is the most popular indoor sport in the world. It is also one of the few sports whose year of birth and originator can be traced back to 100% correctly, a man by the name of Dr. James A. Naismith in the year of 1891. Even though the game was started and grew in the United States, it is now played and watched in more than 150 countries.

When Dr. Naismith invented the game basketball, he was a physical education teacher at the International Training School of the Young Men’s Christian Association (YMCA) in Spring Field, Massachusetts.

Don't use plagiarized sources. Get your custom essay on
“ The history of basketball ”
Get custom paper
NEW! smart matching with writer

It was winter, and his students needed a fast-paced game that could be played indoors. After a lot of thinking he finally decided of a game where players would be throwing a ball into baskets. So he attached a couple of old wooden peach baskets to the end of each gym balcony and brought up some basic rules.

Even though the game was fun to play, there were some problems that they had to solve, for example: when the players would throw the ball into the basket.

They would have to get a ladder to climb up just to bring it back down. So they decided to cut holes in the bottom of the basket for the balls to fall out, which also helped them play faster. Peach baskets were used until 1906 when they were finally replaced with metal hoops and backboards.

The game of basketball consists of two teams, with five players each. On each end of the basketball court is a round metal rim/hoop placed ten feet above the floor.

The object of the game is to score points by shooting a large ball through the basket. Also while preventing the other team from scoring points. The team with the highest amount of points at the end of the game wins.

Then there is the coach who organizes the basketball team and instructs the players with important skills and holds important sessions to drill the team and prepare for each game. The coach also designs plays and strategies to use against opposing teams. Then during the game the coach chooses which players to use and tells them what to do and also decides when to call “time out”. They usually have one assistant coach, mostly in colleges or on a professional team.

Basketball is a fast paced, exciting game to most people. Most of this appeal lies between the intensity of teamwork and the individual athletic skills. As time passed, Dr Naismith became known as “the father of basketball” and more and more people heard of his game. Basketball began to spread across the U.S. then manifested throughout the rest of the world.

Basketball became world renowned for its professional organized games which later in history was broadcasted on radio, television and newspaper. In present day the popular basketball organization goes by the name of the “NBA” which stands for “National Basketball Association” made up of many different teams that represent different cities in the United States. This game is also now played by women in the present day and is called the “WNBA” which stands for “Women’s National Basketball Association”. Basketball is a sport that can often be found in the suburbs but mostly in the urban communities. The sport gradually evolved from tossing balls in a fruit basket, to a full court two sided arena played sport that many enjoy the excitement of playing or watching.

The history of basketball. (2016, Jul 30). Retrieved from https://studymoose.com/the-history-of-basketball-essay 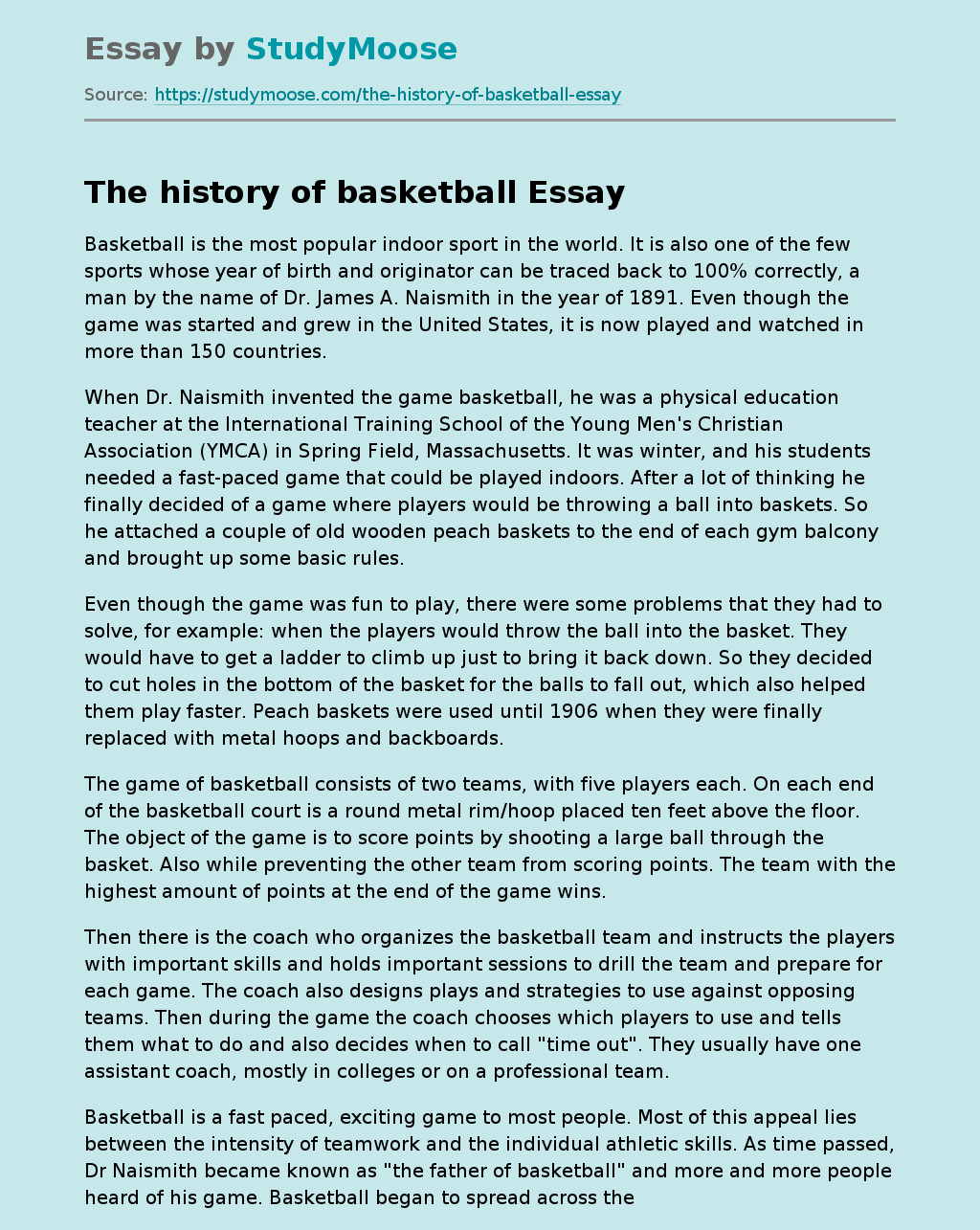