How and Why did Islam spread so quickly?

In 610 C.E., a local merchant named Muhammad completely changed all of Middle East through the religion of Islam. He fled to Mecca, in a cave where he was given the words of Allah and by this, introducing the religion. Overtime, the religion continued to attract new followers, which leads to question- how and why did Islam spread so quickly? Three of the reasons to how this happened were due to trade, the message passed on from God and the conquest of land.

Don't use plagiarized sources. Get your custom essay on
“ How and Why did Islam spread so quickly? ”
Get custom paper
NEW! smart matching with writer

All of Islam Empire, including the Byzantine Empire and Persian Empire had set up trade routes throughout the Arabian Peninsula. Everyone came to Mecca to trade since it was wealthy and very important at this time. Through trading, this brought inventions and ideas. People from different cultures came to trade and got ideas of the Islam religion, then spreading it to their people because they liked the idea that it was one God and how the way of life was under this religion.

Muslim merchants would travel to the trading destinations, which would allow exposure to the religion within other countries as well. Other trade routes led to the Silk Road to China and India, East Africa and Spain. These countries would then, most likely, have converted to Islam. Overall, trading played a huge role in the spreading of Islam.

In addition to how Islam spread quickly was through the message of God. In the Qur’an, it shows the expectancies for what Muslims would have to follow by.

One of the verse states, “But the believers who do good works, both men and women, shall enter Paradise. They shall not suffer the least injustice.” (4:124 Doc B) This means if you do the right things, then you would be granted. Another verse states, “Permission to take up arms is hereby given to those who are attacked, because they have been wronged. God has no power to grant them victory.” (22:39 Doc B) Meaning, you cannot fight unless attacked first.

Along with the expectancies, you have to follow the practices of the Five Pillars of Islam. Including, confession of faith, prayers 5 times per day (facing Mecca), charity to the needy, fasting during the month-long Ramadan and pilgrimage to Mecca at least once during one’s lifetime, also known as the Hajj. In The Ordinances of Government, caliphs have to follow the duties. One of the duties was, “to maintain the religion according to established principles and the consensus of the first generation of Muslims.” (Doc E) These messages of God have helped to unify Muslim beliefs and practices and spreading many inventions and ideas throughout the world due to Islam.

The last reason to how Islam spread quickly was through conquest. From 622-750 C.E., after Muhammad’s death, all of the Arabian Peninsula, China, India, Middle East, and Africa were under Muslim control. This was ruled by the next four caliphs, and were known as the “rightly-guided” and their rule as a caliphate. Relating back to verse 22.39 where it states that Muslims are not allowed to fight until attacked, this shows that they followed the Qur’an while conquering these lands. The reason why Arabs were able to conquer much of Persia and parts of Byzantine was because Muslim armies were too strong and The Persian and Byzantine armies were weak after years of fighting. Overtime, many cultures that were introduced to the Muslim Empire converted to Islam because of Islam’s message of equality and hope of salvation that they would receive by becoming Muslims.

Many cultures have gotten ideas of the religion of Islam through different reasons. Three of which were due to trade, the message of God, and the conquering of lands. Through trade, his followers passed on the ideas to other different cultures. The messages of God were how much of an impact it made on the people to convert to Islam. And lastly, conquest- this shows that they conquered the lands even by following the guidance of religion. Although Muhammad’s death left his people hanging, the message that he left behind from God has made such a huge impact to the world, mostly Muslims.

How and Why did Islam spread so quickly?. (2016, Aug 05). Retrieved from https://studymoose.com/how-and-why-did-islam-spread-so-quickly-essay 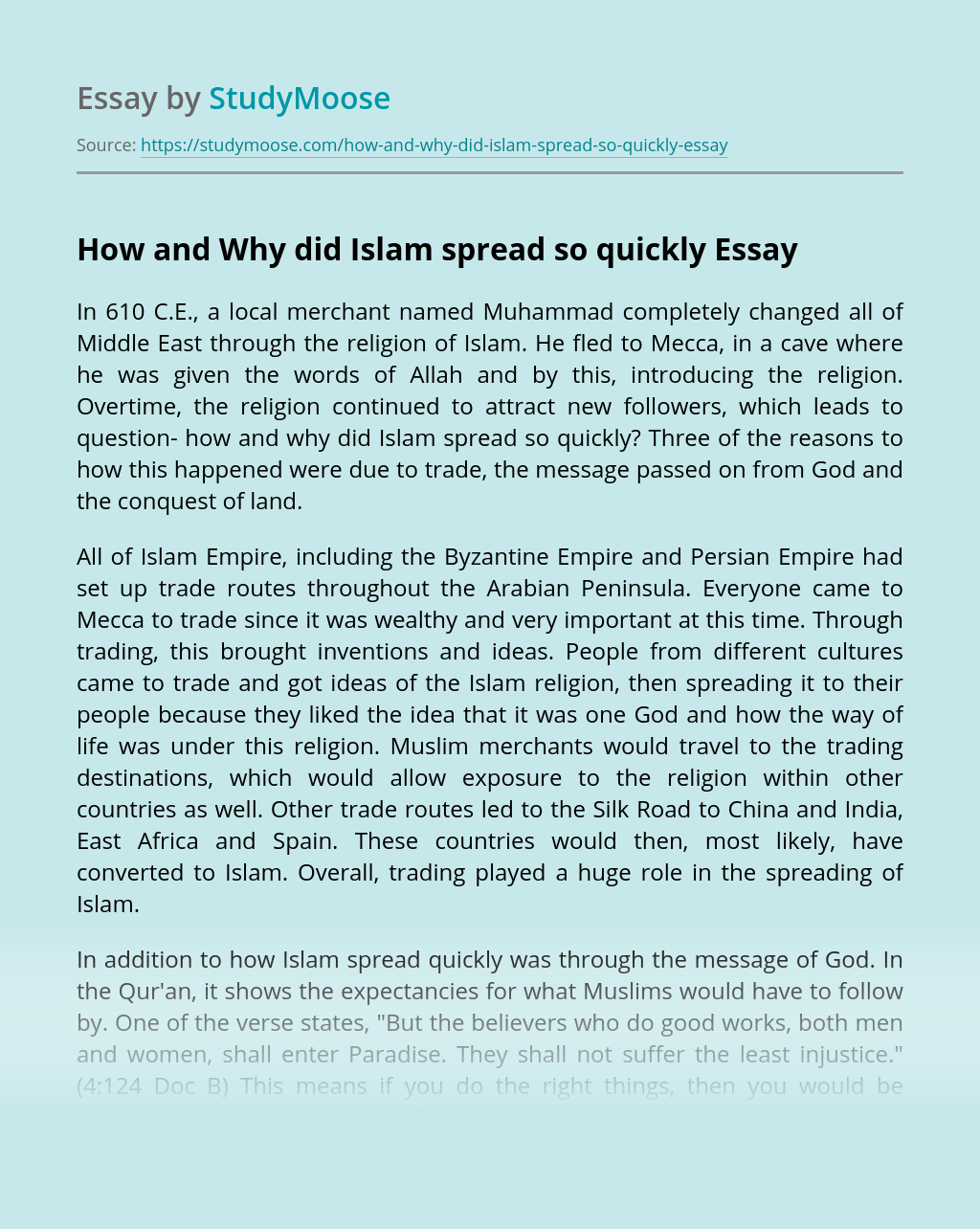