In sociology, when we discuss culture (which is the totality of learned socially transmitted customs, knowledge, material objects, and behavior (Schaefer 2010:50)), we discuss how culture includes such things as; language, beliefs, values and norms. When sociologists studied culture they mainly looked upon the norms of society. Norms are “the agreed-upon expectations and rules by which a culture guides the members in any given situation”(Cultural Norms). There are four types of norms; folkways, mores, taboo, and laws. Although it is important to know that norms vary across the world and two examples of how norms differ around the world would be in America and Japan.

Don't use plagiarized sources. Get your custom essay on
“ American Norms vs. Japan Norms ”
Get custom paper
NEW! smart matching with writer

The first type of norm that will be discussed is folkways. Folkways are “the standards of behavior that are socially approved but not morally significant” (Cultural Norms). “Folkways are sometimes known as “conventions” or “customs” (Cultural Norms). A example of a folkway that varies in America and Japan are business cards. In Japan business cards (called meishi) are a common practice upon meeting someone, but there is a particular set of norms that dictates this kind of exchange.

When meeting someone it is common to “exchange meishi at the beginning of the meeting while standing up”(2). This may be completely weird for most people in America, but in Japan people exchanging meishi upon meeting someone forms a foundation of trust and hopefully builds a respectful partnership that will affect the meeting.

When a person receives a meishi “the receiver should look over the details of the card and perhaps even remark or ask questions about some of the information, so as to show interest”(2).

The receiver should never placed the card in their wallets for it shows disrespect and would be considered very offensive because the meishi shows the individuals occupation and identity. The receiver should place the meishi into their shirt pocket or keep it out during the meeting for it shows that the person has respect for the person their meeting with. While in America people treat business cards very differently. Business cards are handed out when there’s a certain of trust has been reached or when a business transaction has been made.

Another example of a folkway is closing your eyes during a meeting. In Japan when a person closes their eyes during a meeting when a presenter is speaking shoes that their concentrating on the information that is being presenting to them. The closing of eyes in Japan is consider normal and not perceive as inappropriate. While in America when someone closes their eyes during something is consider rude in our society since it indicates boredom or disinterest.

The last type of norm that will be discussed are laws. Laws are “the formal body of rules enacted by the state and backed by the power of the state”(Cultural Norms). There are laws that vary from America and Japan, and an example would be crossing the street. Firstly when someone is visiting Japan they need to be “respectful of the customs and laws in place because it’s for the good of all members in the society and to allow society to be efficient and productive”(5). In crossing a street in Japan the person has an obligation to wait until the signal shows that it is time to cross the street. Laws are more formal and expected to be followed in Japan than they are in America.

Although America does have laws and they’re in force, but it does not mean people will follow or be intact by them. People will often cross the street wherever and whenever they want. This norm shows that in America laws are also formal but it also shows that people are less likely to follow some laws because society tells that it is okay to not follow all laws.

Social Norms are perceived and interrupted differently across the world. What may be consider weird, abnormal, and different to our society is consider normal to another society. When people do study society it is important to remember that each society has norms that they abided by in their everyday life and may vary with our own set of norms. 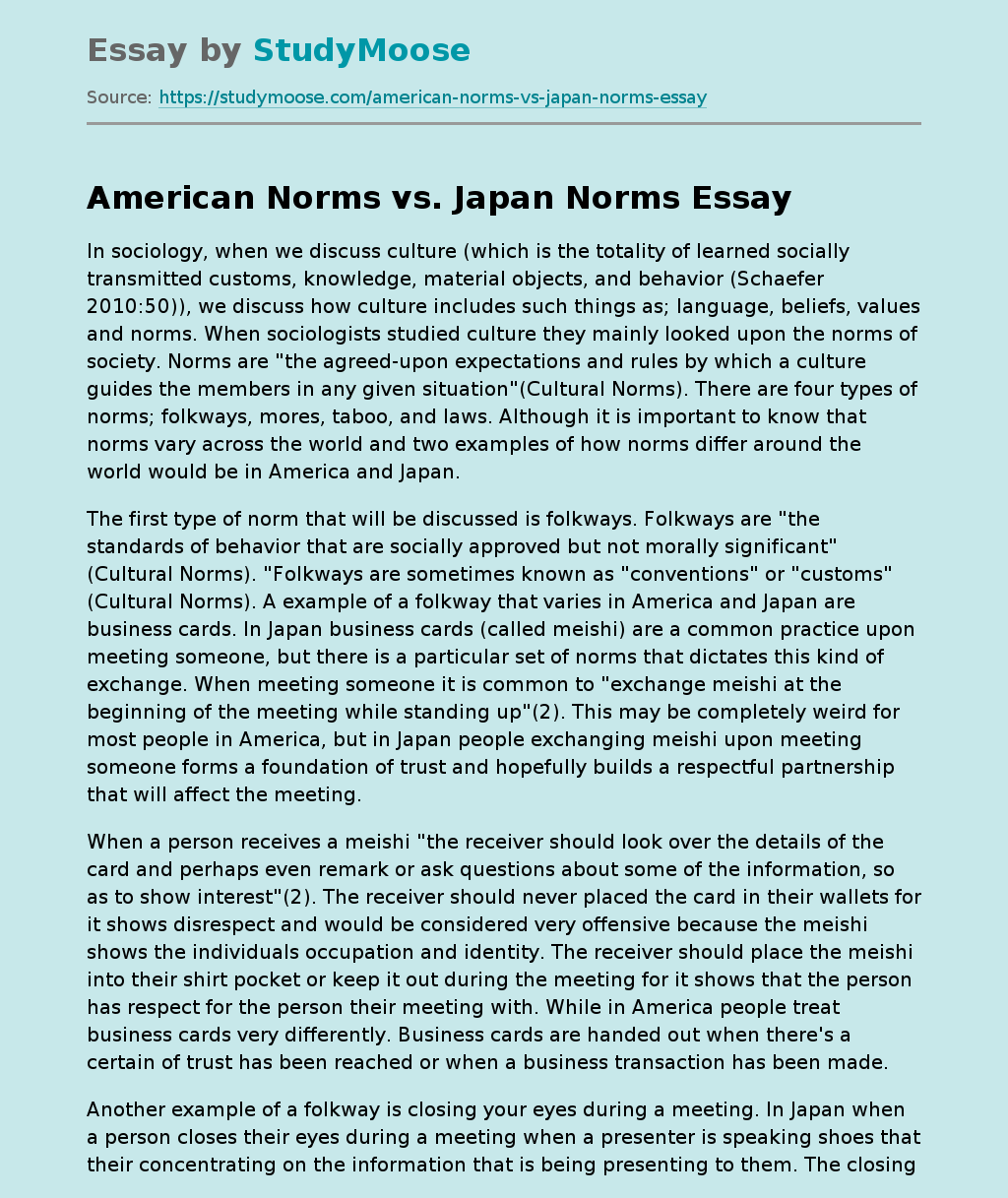