Three black women during the 1950s worked as mathematicians for the National Aeronautics and Space Administration during the Space Race. The main plot of Hidden Figures is to show gender norms and racial bias when these women work amongst other mathematicians who happen to be white men. This film was inspired based on the nonfiction book by Margot Lee Shetterly and was produced by Theodore Melfi in 2016. In the movie, Katherine finds herself in a position where she needs to take care of a personal situation that gets her in trouble by her boss Al, Katherine as a black woman at this point she doesn’t hold back her feelings and as she explains how she really feels everyone in the room is only left stunned.

Don't use plagiarized sources. Get your custom essay on
“ Gender Norms and Racial Bias in “Hidden Figures” ”
Get custom paper
NEW! smart matching with writer

During this cinematic clip, the usage of camera angles, dialog, and lightning is used to show the gender norms and racial bias that happened during the 1950s.

In the first place, the motion picture Hidden Figures utilizes the camera angles in the cinematic clip to show the response of other characters.

Toward the start of the scene, Katherine goes into the room drenching wet with her head held down at a low camera angle while her supervisor Al shows up from the highest point of the stairs looking down underneath, this situation of camera angle shows who is in charge. As the scene proceeds, the camera angle is appeared as a cut on action technique, particularly when each time Katherine talks it is likewise coordinated to show Al and the gathering of men in the room.

Each time Katherine and Al are Speaking the camera angle is centered around the characters outward appearance to show their feelings, Katherine seems worn out and exhausted while Al and the remainder of the group are just confused, to show Katherine’s feelings there are different shots where the camera is engaged from individual to individual when Katherine makes a roundabout remark. At the end of the day, the camera angle is appeared from a cut action technique and low to high lighting to show the characters’ response.

Secondly, the dialogue is shown in this scene to emphasize the emotional state that Katherine is in by using dialogue. Directly from the beginning, the audience can tell that the dialogue is building up by the minute when Al confronts Katherine of why she always leaves for long periods. At this point Katherine isn’t caught off guard or doesn’t seem surprised, however, she is more honest about what she says, Al is only stunned to find the real reason for her disappearance every day. The hurt and tiredness are heard in Katherine as each time her voice increases, this only adds more to the dialogue by creating anger towards each person. Each time Katherine make a slight comment on anyone who she is tired of her voice is stronger and firm only for viewers to feel her emotions, Al, on the other hand, helps build the dialogue only when he shows his confusion and anger towards Katherine in the beginning. The exchange in this scene encourages us to comprehend the passionate state where Katherine seems to appear.

Lastly, a variety of lighting is utilized to help the audience to comprehend and identify with the situation of the emotion of each character. As the scene advances from when Katherine enters, the lighting seems darker in concealed shadows to accentuate the trouble in Katherine. However for Al, the lighting appears to be more bright as he is seen from the top of the stairs to let viewers know that Al in this scene is in control, Al has the power to know every detail of each person. During this cinematic clip, the lighting tends to shift from a cooler tone to a warm tone as the scene moves from Katherine leaving to Al removing the bathroom sign to show the audience a peaceful agreement in the end. Having artistic lighting in this scene is utilized to enable the group of spectators to comprehend and relate in the situation of each character.

Therefore, having the combination of camera angle, dialogue, and lighting uses cinematic techniques to show gender norms and racial bias when three black women find themselves working with white men during the Space Race. The usage of different camera angle adds to the setting to set an appealing view of who is in charge and who is out of place by reminding the viewers in the position of each character. The type of dialogue that builds up a little suspense to the scene when watching each character both facial and body expression as the speech only increases. Also having different types of lighting only adds to a more appealing setting having the different tones that go along with the emotions of the characters. With these realistic strategies, the scene stressed making a setting that shows the audience’s gender standards and racial bias. 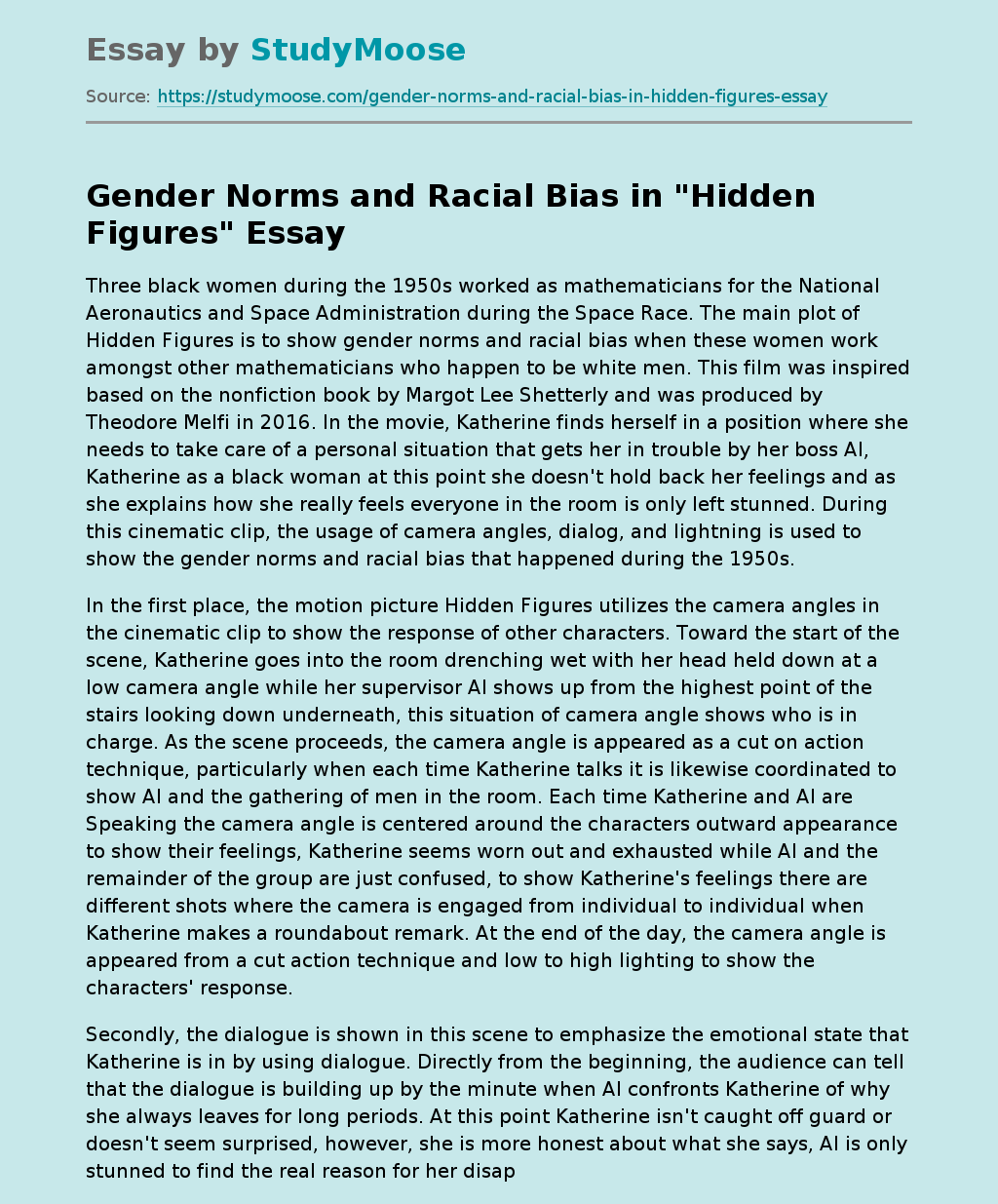