Victims of Circumstances? Antigone , in the play Antigone by Sophocles and Nora in a Doll's House by Henrik Ibsen

“It had been a woman’s task throughout history to believe in life when there was almost no hope”-Margaret Mead. In both plays, Nora and Antigone are the perfect examples of this quote. Though a timeline exists between them, both of them go against hope for respect and /or self empowerment. They were victims of circumstances that led to them becoming what they eventually became.

Sophocles was a Greek lecturer. His first plays were Euripidies and then Aeschylus. Sophocles was the most awarded play right in dramatic competitions which took place during religious festivals.

Don't use plagiarized sources. Get your custom essay on
“ Victims of Circumstances? Antigone , in the play Antigone by Sophocles and Nora in a Doll’s House by Henrik Ibsen ”
Get custom paper
NEW! smart matching with writer

He competed in approximately 30 dramatic competitions.

In Greek mythology the name of two different women is Antigone.

In Antigone Creon proposes that we should choose our ‘philio’ as a principal on the basis of the prevalent society. In this Creon followed the canon of the law and confines ‘philia’. In frequent wars, it was everybody’s responsibility to defend one’s polis. The regulation of law and civilized life pledges one’s freedom in the society.

Greed and profits motivated Creon which extended into his being a tyrant. ‘Will the city tell me how I must rule?’ Should I rule this land for others rather than myself? [1] Here vanity, power are reflected by Creon.

Creon will never do anything in such a way that will show an awful image of himself. In this Creon respects the law of city and ignores and was not influenced by divine laws.

In constrast Antigone followed her conscience and did what she thought was ethical.

It leads Creon’s conflict with Antigone and his family which ultimately ended in a bitter climax.

While performing the lamentation to Polyneices, Antigone was caught red handed. Later when her action was brought in front of Creon her pride was offended. Creon was crueler as he failed to influence Antigone. Also Haemon unsuccessfully endeavored to influence Creon’s decision. He supported the decision which was made by Antigone.

In the end with the arrival of Teiresias, described as the Old Theban, the atmosphere changed with unusual events taking place. Strange birds cried and screamed with a puzzled disturbance and tore at each other with murderous talons.

The city is despondent and disillusioned by the decision of Creon .Prayers and sacrifices by the people of Thebans are not being accepted any more by the god .Later Teiresias tries to convince Creon not to be so stubborn and requests him to rectify his mistakes. It is common to make mistakes in a life after being caught in a dilemma. He is sure that due to fear also he won’t allow pollution of the city to burn him. Teiresias feels that Creon actions will annoy both worlds and he will surely devastate Creon in the end. He also predicts the future of Creon that he will die in his own house.

After hearing complicated speeches of Teiresias and the chorus, Creon decided to withdraw his decision to Antigone and Polyneices. As a consequence Creon found Antigone had committed suicide and was bereft of his family members.

Later he understands his arrogance and egotism which proved a disaster.

Finally he has learnt his lesson and he shows a complete change in heart and attitude, but perhaps it’s too late.

The play A Doll’s House was written by Henrik Ibsen’s in 19th century.. Though this play has a very simple and ordinary outlook, it is often referred to as a problem play as it deals with problems pertaining to many social and contemporary issues. It is clearly evident that Henrik Ibsen doesn’t use the normal sophisticated kind of English used by the other authors; instead he prefers using the normal, simple language just to add a suggestion of realism to his plays and to make it look more realistic in nature.

The society is such that males are generally considered overpowering and dominating over the females all the time. Nora and Torvald are the main characters in the play The protagonist of the play is Nora Helmer. Her husband Torvald Helmer is a lawyer by profession but instead he is working as a manager at a bank where he earns a substantial amount of money.

The scene opens in the household of Torvald and Nora Helmer and all the action takes place in just one particular room. The scene starts off on a Christmas Eve when Nora comes home with loads of parcels. She brings along a porter who is carrying the Christmas tree which is later taken by Helene, the maid and tells her to hide the tree from her children. Just about when the porter is about to leave Nora gives him a crown, whereas she owed him only 50 ores. Just then Torvald comes from his study and greets her by calling her “little skylark” and teases her by telling her that she spent all the money that he had given to her to buy the presents. Though Torvald mentioned this in a playful mood, there is seriousness and gravity in his tone when he says this. This indicates that Nora is spendthrift in nature as for the nature of Torvald, he is shown as a worldly and materialistic person. Nora however feels that their financial position is far better than before when he was only a petty lawyer and taken up the job of a bank manager.

Nora can easily be referred to as a casualty to the chain of events that takes place in the course of the play. Her husband, Torvald generally considers her as a child and eventually ends up calling her pet names and scolding her in public as if she were a small immature kid. Nora begins to resent this attitude of Torvald towards her. It is natural that a woman expects her husband to treat her well and with equality but the time the play was written suggests the dominance of male society in the prevalent time.

It all starts when Mrs.Linde an old friend of Nora’s comes to visit her and asks her a favor of getting her a job. So, eventually Nora talks about it to Torvald and he immediately removes Nils Krogstad, another employee at the bank and replaces him with Mrs.Linde. The connection between Krogstad and Mrs.Linde can be traced far behind. Mrs.Linde was Krogstad’s lady-love but she leaves him in place of a rich man just to support her family as at that time she was in need of someone who could fend for her and her two young brothers and her mother. The reason that Torvald gives regarding the removal of Krogstad is that he was involved in a legal complication of forging a signature. This was not at all appreciated by Torvald and therefore he goes to Nora and threatens her that he would reveal the secret that it was she who had forged her father’s signature when Torvald was seriously ill in desperate need of money. She is left in turmoil and is totally confused about what to do next. She then tells Mrs.Linde to pacify Krogstad about the letter of shame committed by Nora that he was going to place in the mailbox.

In the end one day after returning from a ball when Torvald opens the letter and discovers the crime committed by Nora he angrily calls her a liar, a hypocrite and a law breaker. His anger reaches such great heights that he decides that he would no longer share a close relationship with Nora implying that she will also be a hindrance to the proper upbringing of their children.

This leads to the final tragedy in their relationship. From the above instances, it is evident that since many years it was basically a pretentious and superficial marriage where neither of them loved each other. The same also goes for Mrs.Linde and her husband. She decided to walk away when she found someone else who could provide for her and her family. Nora Helmer is a sufferer as she has to leave behind her husband and more importantly her children. But then her fury rages and she bursts out and tells Torvald that he wasn’t the man she thought she did marry and eventually leaves the house.

As Socrates has said “the unexamined life is not worth living” clearly signifies the relationship between Torvald and Nora.. Therefore, she walks out of her marriage leaving behind her children and starting a new unknown chapter in her life. Hence she was really a victim of circumstances.

Victims of Circumstances? Antigone , in the play Antigone by Sophocles and Nora in a Doll's House by Henrik Ibsen. (2020, Jun 02). Retrieved from http://studymoose.com/victims-circumstances-antigone-play-antigone-sophocles-nora-dolls-house-henrik-ibsen-new-essay 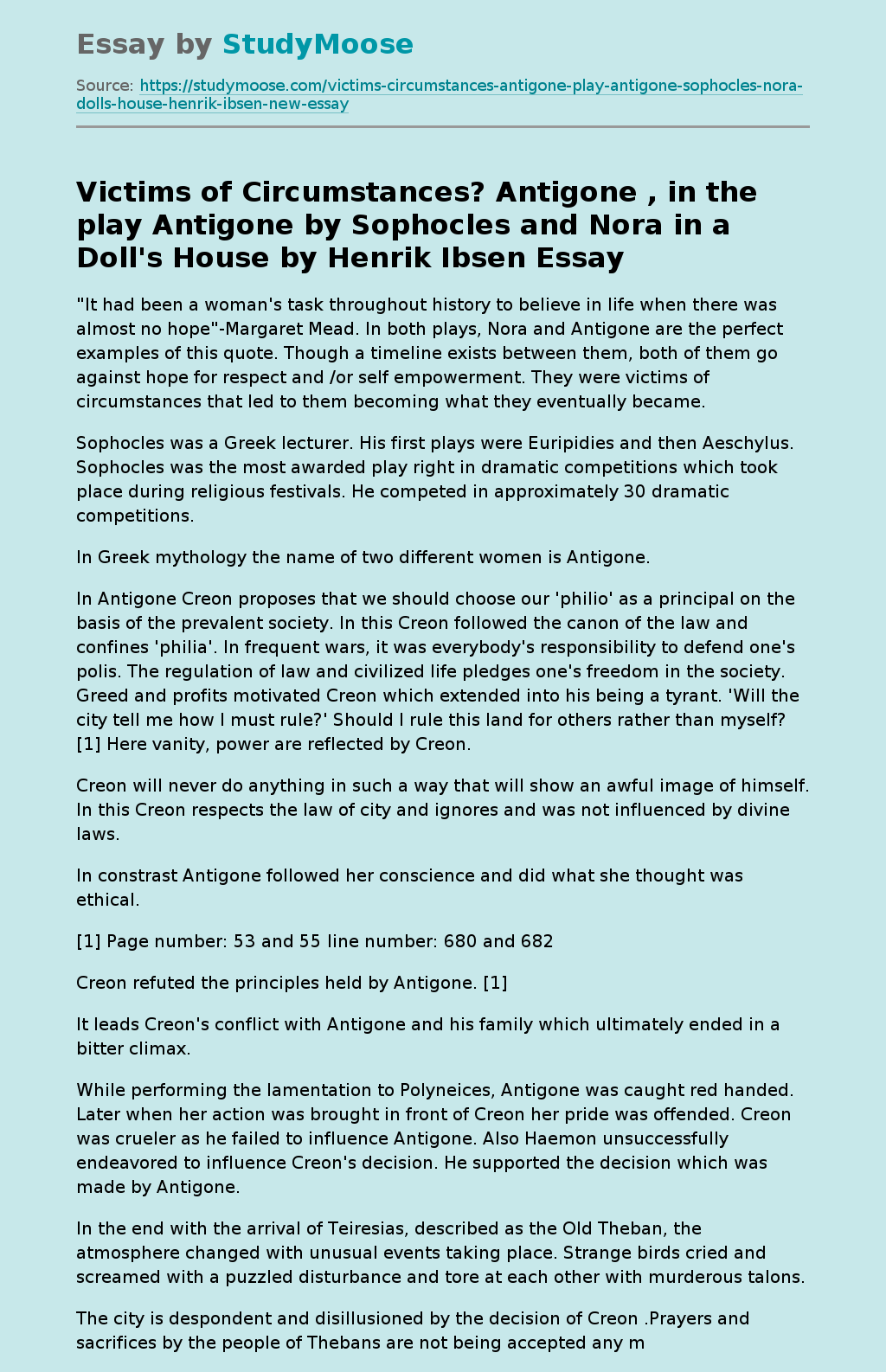