In the 19th century, society was patriarchal, dominated by men, and women were deprived of all their rights. Women were considered dependent on men in all cultural domains of life. In the classical novel, The Scarlet Letter, Hester Prynne is portrayed as a symbol for sin in the Puritan community she inhabits. Her struggle with the Puritan patriarchs forces her to be a strong and independent woman. On the other hand, Nora Helmer in Henrik Ibsen’s A Doll’s House is a willful woman of the brave new world who dares to stand against the patriarchal dominance of the society and even of the domestic life.

Don't use plagiarized sources. Get your custom essay on
“ Womanhood Defined by Hester Prynne and Nora Helmer ”
Get custom paper
NEW! smart matching with writer

Even with their differences in approaching womanhood, both women show their passion for what they believe in, they do not abide to how women should act during their time, and they act by the principles they had set up for themselves. Together the Hester and Nora show how womanhood isn’t necessarily becoming a woman but the ability to be able to stand up to what one thinks is just even if society thinks differently.

The Scarlet Letter by Nathaniel Hawthorne, a classic novel from 1850, was a representation of what women had suffered in a patriarchal society when condemned for a serious crime. Hester Prynne instead of showing hatred for the puritan society that condemned her to hold a burden of shame became a woman of greater tolerance and higher patience. She fights silently marking her extraordinary power of forbearance. Even after Hester dies she still carries the scarlet letter as it is inscribed on her grave “On a field, sable, the letter A, cules” (p.

180). In other words, even though the hypocrisy and judgment from the puritan society Hester, symbolizing the red letter A, was able to rise above the label she was given, and instead of becoming the symbol of shame and dishonor that she bore, it would symbolize everything she was able to overcome. Moreover when the novel states “she repelled him, by an action marked with natural dignity and force of character, and stepped into the open air, as if by her own free-will” (p. 36) Hawthorne establishes Hester’s independence and dignity, even at a moment where she’s supposed to be completely humbled. This independent spirit will continue to define Hester throughout the novel, like when she defends her right to raise her daughter at Governor Bellingham’s mansion and when she urges Dimmesdale to run away to England with her.

A Doll’s House by Henrik Ibsen was meant to show his aspects of being an individualist in a society, like Norway, were everyone was a patriarch. In this play, Nora Helmer is first seen as an affectionate housewife who does not seem to mind her doll-like existence, in which she is coddled, pampered, and patronized. However, as the play progresses, Nora reveals that she is not just a “obstinate little woman” (p.6) as Torvald calls her. That she understands the business details related to the debt she incurred taking out a loan to preserve Torvald’s health indicates that she is intelligent and possesses capacities beyond mere wifehood. Her description of her years of secret labor undertaken to pay off her debt shows her fierce determination and ambition. Additionally, the fact that she was willing to break the law in order to ensure Torvald’s health shows her courage. Krogstad’s blackmail and the trauma that follows doesn’t change Nora’s nature; they open her eyes to her caged potential. “I have been performing tricks for you, Torvald,” (Act 3 p.66) she says during her climactic confrontation with him. Nora comes to realize that in addition to her literal dancing and singing tricks, she has been putting on a show throughout her marriage. She has pretended to be someone she is not in order to fulfill the role that Torvald, her father, and society at large have expected of her.

Both texts show that what society believes isn’t what is always right. As The Scarlet Letter notes “A tendency to speculation, though it may keep a woman quiet, as it does a man, yet makes her sad. She discerns, it may be, such a hopeless task before her”(p.113-114). Entirely meaning, other women like Hester who become aware of the inequalities in the society around them have the sad realization that it is almost impossible for them to change the many ideas and beliefs that lead to women facing a double standard. Hawthorne uses the statement to indicate that Hester’s experiences are part of a larger pattern, and also to suggest that many of the features of Hester’s society may still not have changed, even in his own time. However, in A Doll’s House Nora has been suppressed and simple her entire life and has allowed every man to define who she is. The realization Nora has when Torvald refuses to stand up for her and take the blame of her crime of forgery leads her to understand that she will never be free until she leaves the life that Torvald and her father have sculpted for her. In real society both books mirror the realization women have had in the 19th century that men shouldn’t have any more rights than women do because that is what is just even if the law has a different point of view.

Through the revelation of both of the female characters Nora and Hester we see that they are sternly opposite to each other but both of them represent extraordinary zeal and feminist power in their own respective abilities. Whether they succeed or not, that is not the crucial matter but the way they fought against the oppression, silently or verbally, is a matter of feminist concerns and womanhood as a whole. Acknowledging this idea we see that women in the past have had the same fight in a society that is against their new ideals to be independent and self-governing like any man on earth. Even with the law and society against them, the women of the 19th century stood up for what they believed in through struggles seen and unseen across the world. 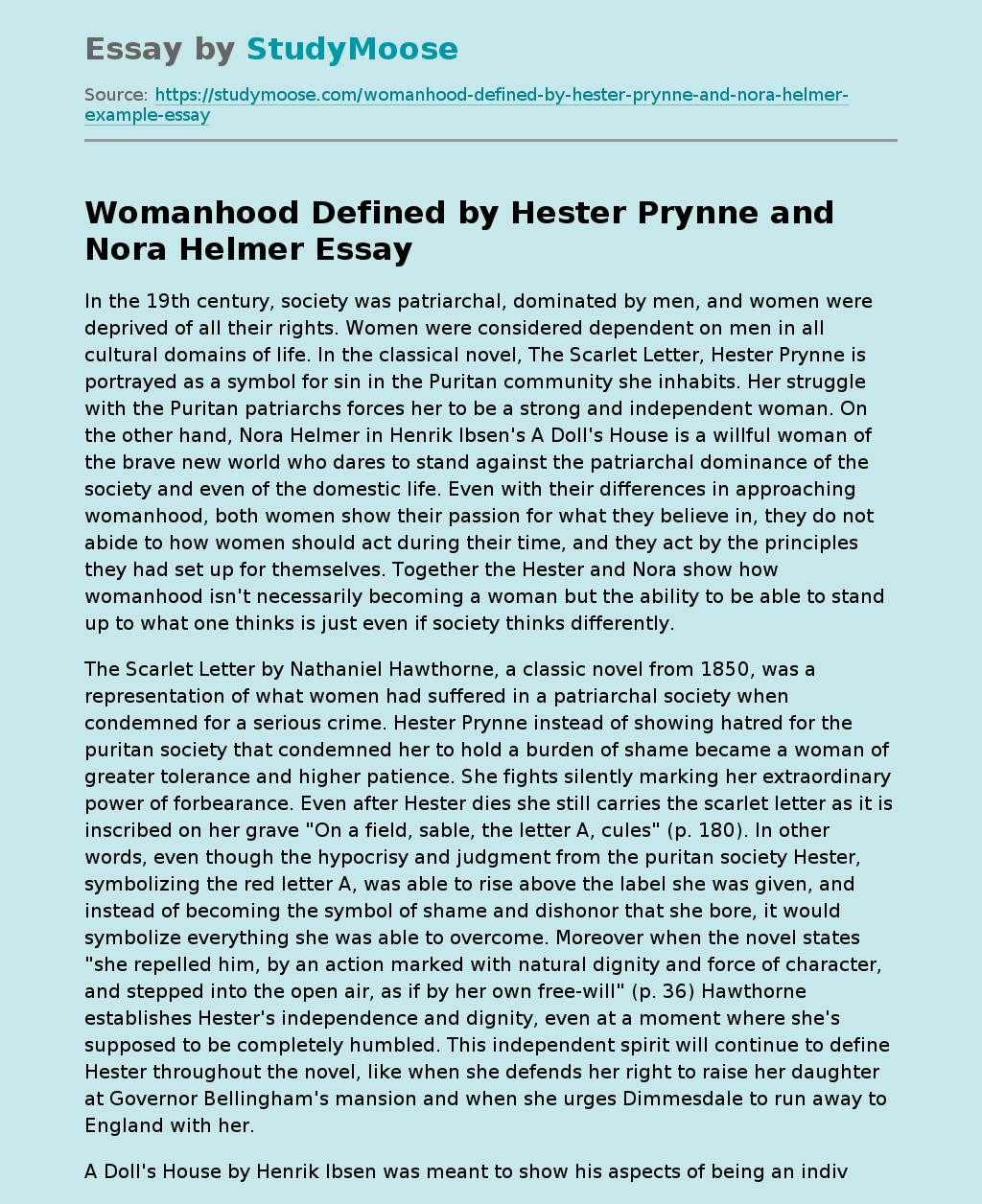