Womanhood of Cleopatra and Octavia

Antony and Cleopatra is one of Shakespeare’s most dramatic plays; however it has not been staged nearly as many as plays such as Hamlet or Macbeth because it is such a hard play to produce due to its enormous variety of content. However the mere strength of the characters within the play creates intense tragic possibilities, despite the difficulties that may be faced in production. Cleopatra and Octavia are contrasting characters in the play Antony and Cleopatra. Each embodies different aspects of womanhood; each is a model of the qualities that should be seen from the country and culture they belong to.

Don't use plagiarized sources. Get your custom essay on
“ Womanhood of Cleopatra and Octavia ”
Get custom paper
NEW! smart matching with writer

The play centres around the contrast between the lavishness of Egypt with the lineal qualities of the Roman Empire.

Egypt is a country of luxurious feasts where eight wild boars are roasted for a breakfast for twelve people (2. 2.189-90) and parties; it is a very sexualised place whereas Rome is a country characterised by politics, scenes of intellectuals and battles, thus the lives and loves of a Roman stand in opposition to the lives and loves of an Egyptian.

Cleopatra is a symbol of Egyptian luxury, passion and lust she is a highly sexualised woman and is not afraid or embarrassed to show this; this is shown in her sexual innuendo in reference to Antony’s war horse: ‘Happy horse, to bear the weight of Antony! ‘ Her own language often betrays her own sexual nature this can be seen where Cleopatra speaks to the Messenger from Rome:

Ram thou thy fruitful tidings in mine ears, that long time have been barren.

(2. 5. 23-24) Egypt is a place dominated by strong-minded mature female sexuality thus making this play one of Shakespeare’s remarkable works due to its attitude to female sexuality as something natural, beautiful and open. Although Cleopatra is described by some in the play as nothing more than a gypsy slut: ‘to cool a gypsy’s lust’ (1. 1. 9) we understand from the differences between Egypt and Rome and their understandings of each other, that Cleopatra embodies Egypt and all it stands for and so can’t be controlled or categorised as a Roman can be.

Cleopatra is a mixed character and has sudden switches of behaviour from one mood to another, for instances the arrival of a messenger from Rome telling Cleopatra of Octavia, Antony’s new bride. Cleopatra harasses the messenger for news, and is violent and abusive to him as she hasn’t heard what she wants to, once her servants have calmed her down she feels remorseful and sorry for her actions that were must unlike a royal action should be. Cleopatra is a irrational and irratic character who often reacts to menial things, however this can be seen as her way of reacting to the fear of losing what she knows: Egypt and Antony.

Her fear for losing and her sense of insecurity is seen through her jealously, that Shakespeare presents clearly in her wish to know what Octavia looks like, she is driven by these uncontrollable passions she feels towards Antony. Her feelings of insecurity are not settled by Antony, and his treatment of both his wives Octavia and Fulvia doesn’t settle her fears but instead gives her little cause for complacency, ‘Now I see, I see, In Fulvia’s death how mine received shall be. ‘ (1. 3. 66) Cleopatra is both seductive and somewhat repellent and it is this mix that makes her such a mysterious and puzzling mixture.

Even Antony on occasions doesn’t know how she will react and can’t predict her actions or behaviour either. Antony loves Cleopatra because he wants to, not for any political reasons; there is nothing or any reason why he should love Cleopatra, it is merely his choice. Our deep understanding of Cleopatra’s charm and enchantment comes from the descriptions we are given of her; many of which are taken directly from The Life of Marcus Antonius in Sir Thomas North’s translation of the Roman historian Plutarch’s Lives of the Noble Grecians and Romans (1579). Here Cleopatra is compared to Venus, the goddess of Love.

Shakespeare has taken North’s basic ideas and developed them to a point that the beauty of Cleopatra is seen almost as supernatural. It is these descriptive speeches of Cleopatra that help the audience to understand the infatuation that Antony and others before, have had with Cleopatra: For the person of herself: She was laid under a pavilion of cloth of gold of tissue, apparelled and attired like the goddess Venus (North) It is this beauty that Cleopatra relies on to win over men; she feels herself to be the human incarnation of Isis: ‘Now from head to foot I am marble constant.

Now the fleeting moon no planet is of mine’ (5. 2. 237-240) and therefore men are captivated by her and become addicted by the strange power of Cleopatra’s attractiveness. It is said by some that Cleopatra used her beauty and her body to gain what she needed and what she felt was needed for Egypt, as Hughes-Hallet observed: She captivates Antony and then uses her power over him to demand the Kingdoms of Syria and Arabia. (Hughes-Hallet, 165) Cleopatra is portrayed as a strong leader of Egypt and in this respect has similarities with Elizabeth I who was on the throne of England through Shakespeare’s early life.

She like Cleopatra was a dominant figure and felt she embodied Britain as Cleopatra embodied Egypt. How unlike Cleopatra, Elizabeth I was prepared to listen and take advice from others who were experts in the field in question; this resulted in her defeating the Spanish Armada. Unlike Cleopatra who although demanded to be treated as a general upon the war field refused to listen to advice which resulted in awful consequences and subsequently the lose of life for her and Antony. Rome is a place where the need for order and discipline is the norm; there isn’t room amongst the Politics and duties for sensuality and pleasure like in Egypt.

It is this that causes Antony to be torn ‘between the military honour and familial duty of Rome and the sensuality and luxurious life-style of Egypt. ‘ Rome is a predominantly male society which women have no say; it is associated with action, mainly military and political action. Charney describes it as ‘ a place of conference tables, armour, political decisions and hard materials objects ‘ (102) Octavia is a model of Roman qualities, of obedience and duty. In Shakespeare’s Antony and Cleopatra, her role is reduced greatly in comparison to that of the Octavia described in Plutarch’s version.

In this version she is seen as more of an independent figure rather than one completely dominated by male relations as portrayed by Shakespeare. By moving Octavia into background Shakespeare allows a greater contrast between Octavia and Cleopatra, thus highlighting the great differences of lives in Egypt and lives in Rome. Plutrach wrote of Octavia’s domestic virtues, whereas in Shakespeare’s play Octavia is ridiculed especially by Cleopatra as seen in act 3 scene 3 Messenger: Madam, I heard her speak; she is low-voiced Cleopatra: That’s not so good. He cannot like her long.

Womanhood of Cleopatra and Octavia. (2017, Aug 25). Retrieved from https://studymoose.com/womanhood-of-cleopatra-and-octavia-essay 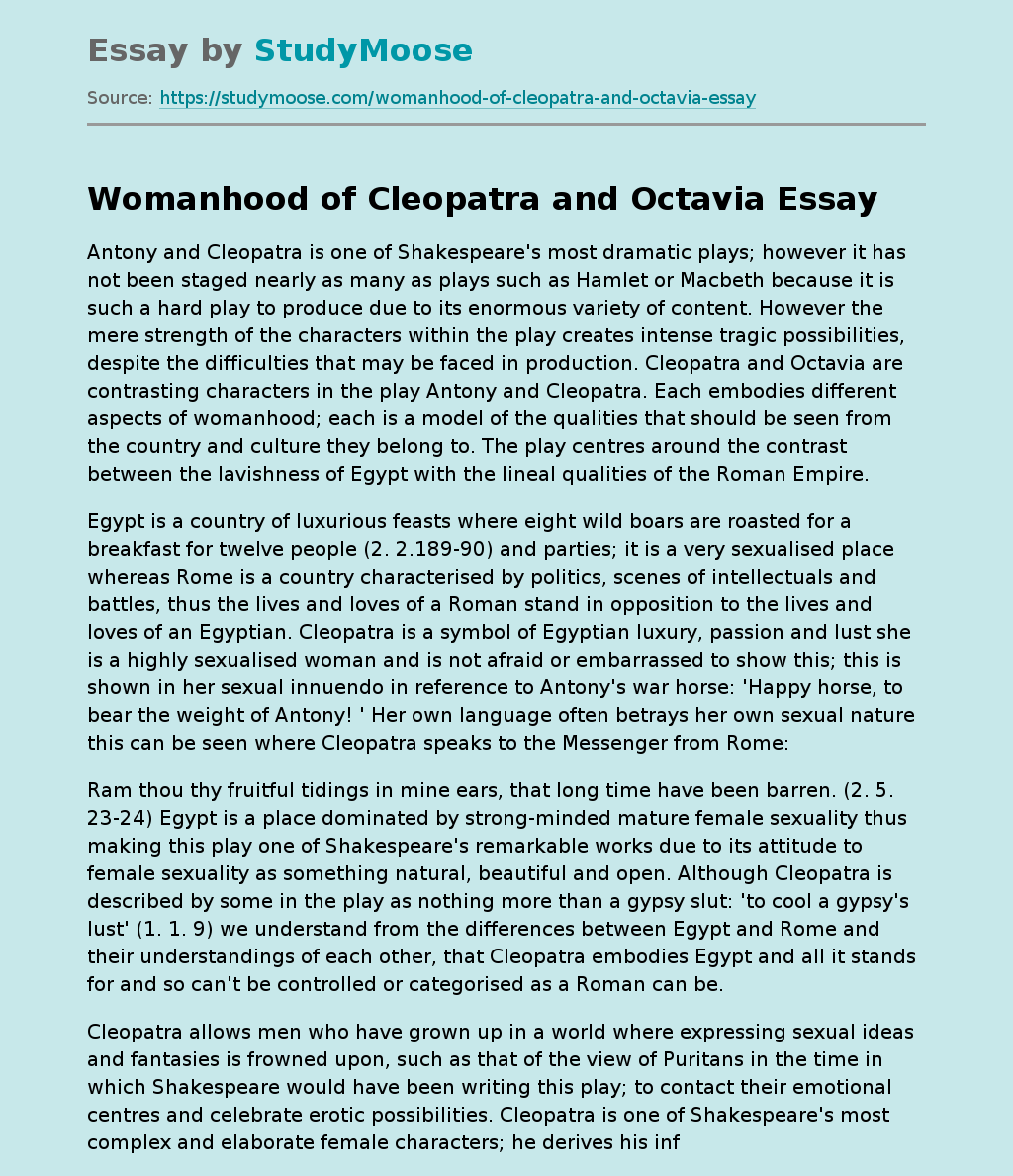