The Distance Between us Book Review

The term “The American Dream” is very broad with many meanings and certainly broader than any single statistic can measure; however we all our own definition of that. Some would say it is building their dream house, going to college, being wealthy, or just having a family. While Reyna Grande’s memoir, The Distance Between Us it became clear that term defines most people no matter where you were legally born, how much money you have, or the family you were blessed with.

Don't use plagiarized sources. Get your custom essay on
“ The Distance Between us Book Review ”
Get custom paper
NEW! smart matching with writer

We all go through many struggles throughout our lifetime and Reyna was no different, even after her family’s incomprehensible trials and tribulations; although weighed heavy on her mind, she never let that stop her from letting go of her aspirations and dreams. She had three people in her life that influenced and motivated her, her father, Mago, and Diana. Alike Reyna, I also had three people that inspired me to never give up my dream. My Father, my Aunt Mirta and my husband Scott.

Reyna’s father was a very hard working man, and wanted the best for his children. He might have showed his love for his them in very strange ways; however he always made it very clear that education was the key to their success. “I brought you to this country to get an education and to take advantage of all the opportunities this country has to offer”. She knew her father was very serious, and wanted to make him proud. Education became her life and I think this is one of the reasons she never gave up, even when times got tough she thought about the other Father- not the violent, alcoholic one, but the who left to the U.

S because he wanted to her give something better.

Her sister Mago was her rock; her little Mother you could say. She raised Reyna in her parent’s absence; in fact if it wasn’t for Mago, she might not have even be in this country. “I won’t go with you if you don’t take Reyna, Mago said. I mean it”. When she told her father this, Reyna knew she
was torn inside but knew deep down she felt the emptiness that she also felt, and would never let her feel that pain again; the pain she felt when her parents left. When they got to the United States that bond never changed between them. She stood by her side through her school events, even when her Father and Mother did not. For instance, Mago was the one who got up at five in the morning to help her sister get ready for the Rose Parade. And presence, as always, filled the void of my parents’ absence. For this, I believe this kept her motivated to keep striving for more; knowing Mago was always there for her.

Diana came into her life when Reyna started college in 1984, this was the beginning of a beautiful friendship. She was her English Professor, to her surprise, who spoke excellent Spanish. She not only became involved in her personal life, but especially with her education. She had given Reyna her first book written by a Latina author, in fact the first book anyone gave her. She always loved to read, but Diana encouraged her to write more. She says in the book, “Diana planted a seed inside me, and through those books, the seed began to grow”. Clearly this is inspired her to become the author she has become today.

My Father was much like Reyna’s, except for the abuse thankfully. My Father and Mother divorced early in my childhood and I was sent to live with my Mother. This meant I only got to see my Father when he picked us up for weekend visits; which seemed like an eternity for me because Dad didn’t always come every weekend. Sometimes I would wait all day for him, just to be disappointed when he didn’t come. However, I was a Daddy’s girl because he treated me like a princess; he always made me feel special even though I felt like I wasn’t. When I turned thirteen I decided I wanted to live with my Father and his girlfriend of many years. It was much different from living with my Mother and Step Father, they had rules I had to go by. This was difficult because I basically did what I wanted while living with my Mother. I hated it at first; I thought they were just being mean. All my dad ever asked from me is to get good grades in school, so I could be more than what he was. Again this difficult for me because my Mother never cared, so I still didn’t really try. When I was seventeen my Father passed away suddenly. Something clicked inside me when that happen and from that day forward I knew I had to graduate from High School for my father.

After he passed I moved into my Aunt Mirta’s home so I could continue to attend the same High School. Again a world of difference in her home as well; even more so than my Father’s. Her rules were even stricter and I had to attend church regularly. I wasn’t use to this kind of attention or this much authority, and of course I rebelled every chance I got. She is a very strong and independent women; I admire her for this. It wasn’t until I got old enough to realize she just wanted the best for me and I feel like she has made me into the women I’ve become. She was more of a Mother figure to me than my own Mother. Like Reyna’s Mother, my Mother was only concerned with Men and her own happiness. Consequently, I apologized to her several years ago for being such a horrible teenager and not giving her the respect she deserved because she was always there for me.

The third person that is an inspiration to me every day and never lets me give up on my dreams is my husband Scott. In fact without him I probably would not be in college writing this very paper. He came into my life three years ago, after I went through a sticky divorce. I met him through a mutual friend and we instantly had a connection. He was everything I prayed for; he loves my kids, doesn’t drink or do drugs and loves me to pieces. Besides all of those great qualities he encouraged me to return to college to pursue my dream of becoming an RN and insisted I quit my full-time job to concentrate on school; for this I will be forever grateful.

In conclusion, I feel like Reyna and I had a lot of the same struggles throughout our lives. The Mother that neglected us, the Father that wanted more for us but didn’t know how to show it, and the self-worth we didn’t have growing up. It isn’t until now, after becoming an adult and realizing all of those things that brought us down, were actually things that made us who we are today.

The Distance Between us Book Review. (2016, Mar 06). Retrieved from http://studymoose.com/the-distance-between-us-book-review-essay 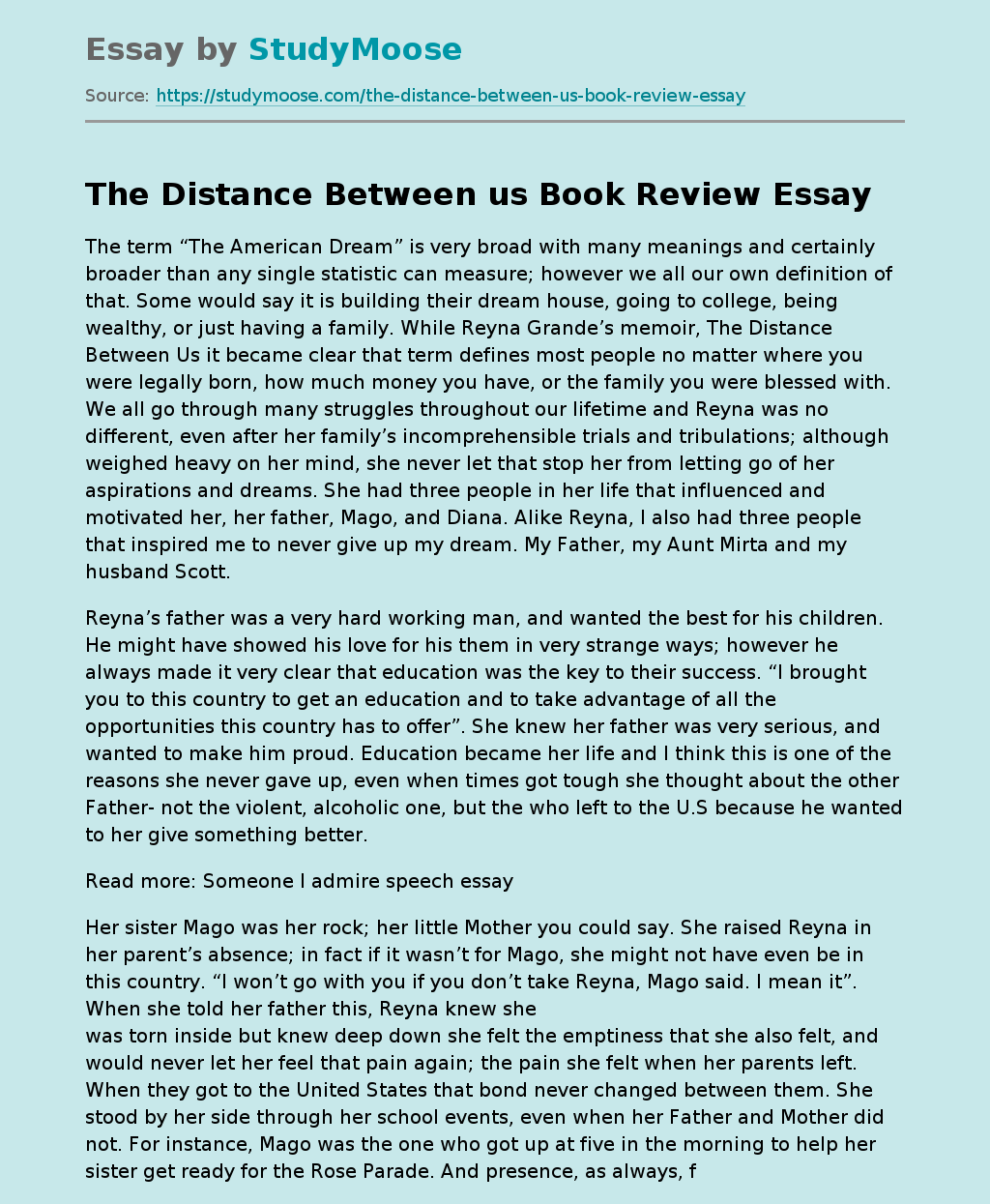