All our dreams can come true, if we have the courage to pursue them

In the novel In Cold Blood, the author Truman Capote tells us the story of the brutal murders of 1959 in Holcomb, Kansas. In a town that was quiet and peaceful, and the townspeople were all friends, no one ever thought that the Clutter family would be murdered in their own home. Perry Smith and Dick Hickock shot four of the Clutter family members in search of a safe that contained massive amounts of cash, but this safe didn’t actually exist.

Don't use plagiarized sources. Get your custom essay on
“ All our dreams can come true, if we have the courage to pursue them ”
Get custom paper
NEW! smart matching with writer

Capote has conducted personal interviews with Perry, in which Perry told him about his dreams. Dreams, both figuratively and literally play a vital role in the characterization of Perry, and help the reader to understand him better.

Perry Smith has a complicated and bizarre personality. And through his many dreams, we the readers get to understand him better. Although Perry had only a grade-school education, he maintained a strong interest in art, literature and music. And these dreams help show us that even though Perry was a cold-blooded murderer, he still had a gentle and peaceful side to him.

Capote made the readers feel pity be companionate for Perry, even though he is one of the antagonists in the story.

One of Perry’s dreams is to be a singer. He dreams that one day he will be a very famous singer, and playing in front of an audience made up of famous celebrities in an elegant nightclub in Las Vegas. This is why he carries his old guitar with him wherever he goes, in hope that he gets discovered.

This helps the readers connect with Perry, by showing them that Perry has dreams of being famous and recognized, just like everyone. Since he was a child, Perry had dreams of travelling around the world and discovering hidden treasures. He read books about diving and answered advertisements that offered maps of where the treasures are located. He envisioned that one day he will dive down strange waters and will find a drowned cargo of diamonds and pearls, heaping caskets of gold. Perry carried the maps with him, which tells the reader that no matter what happens he Perry was still holding on to his dreams. After the murder took place, Perry convinced Dick to run away to Mexico so that they can find the treasures.

In Mexico, after all their money is gone, Dick shatters Perry’s dream. He tells Perry to wake up and stop dreaming, because there aren’t any sunken ships or caskets of gold, and even if there were, Perry couldn’t swim. And despite his underwater daydreams and all the talk about skin diving, Perry hadn’t once gone into the water and never took of his pants fearing that his leg wound will disgust people. And on their last night in Mexico, Perry’s guitar gets stolen. Perry always wished he had a real home, and when he did have a real home they didn’t last too long. His first real home was shattered, due to his mother running away. And after travelling to Alaska with his father in hopes of making a fortune and having a real home, both dreams failed due to the roadside lodge not gaining any business. Perry’s dream of having a wife and a family wasn’t achievable due to everyone’s knowledge of the murders he committed.

Perry also had a different kind of dream. He has this reoccurring dream of giant yellow parrot. As a young child, Perry was living in a California orphanage run by nuns. The nuns have physically abused him by whipping him and beating him because he witted his bed. The parrot appeared and blinded the nuns, fed on their eyes, slaughtered them, and finally carried him in his wings to paradise. And as the years went by the torments that the bird delivered have altered. Although others replaced the nun such as older children, his father, a faithless girl, and a sergeant he’d known in the Army, the giant yellow parrot remained there to protect him. He had a lot of anger and pain inside of him and he wanted to release it, and the yellow bird was the avenging angel who savaged his enemies and rescued him in moments of mortal danger. After leaving the orphanage he lived in a children’s shelter in which he discovered that there are worse people than the nuns. There they hated him not only because he wetted his bed, but also because he had darker skin, and being a half-Indian.

There was this one nurse who filled a tub with ice-cold water, and held Perry under the water till he turned blue and nearly drowned. This might also be the reason why he doesn’t know how to swim, because he fears he will drown. The parrot represents hope and offers Perry salvation from the tormenting figures in his life. Perry also describes a reoccurring dream in which a tree full of diamonds is guarded by a big fat snake. The diamonds and the snake represent many different things in Perry’s life. The diamonds might represent things of great value or things that Perry is chasing, while the snake represents his fears and the things stopping him from achieving his goals. And that he knows if he went to take the diamonds from the tree, the snake, will get to him and stop him. This helps us understand the Perry is willing to risk his life just to get what he wants. This applies to him killing the Clutter family even though he knows he might get caught. And when Perry tries to tell Dick about this dream, Dick seemed uninterested and tries to tell a joke. This tells us that Perry and Dick are very much different characters.

Dreams play an important role in the characterization of Perry and helping the reader understand him better. Dreams also play a vital role in Perry’s life and without them he would just be a cold-blooded murderer, who might kill more people or even take away his own life. Compared to Perry’s dreams, Dick will seem very shallow, when his only wish in life is to have plenty of blond chicken. Perry’s dreams, from becoming a singer to treasure hunting, are all kind of a coping mechanisms, a way of compensating for misfortunes and pain he has suffered through his life. The bird feeding on the nun’s eye shows us his dark side, while the bird taking him to paradise, tells us that he just wants some peace. We could never be sure whether these dreams are actually Perry’s dreams in real life or Capote just made them up so that we feel sympathetic to Perry. I believe that if Perry wasn’t abused as a child and he lived in a normal house with his family, there would not be a dark side to him. The dark side was created by all the pain and abuse he received. So the question is what would you do when you have nothing to live for and all your dreams are shattered?

All our dreams can come true, if we have the courage to pursue them. (2020, Jun 02). Retrieved from http://studymoose.com/dreams-can-come-true-courage-pursue-new-essay 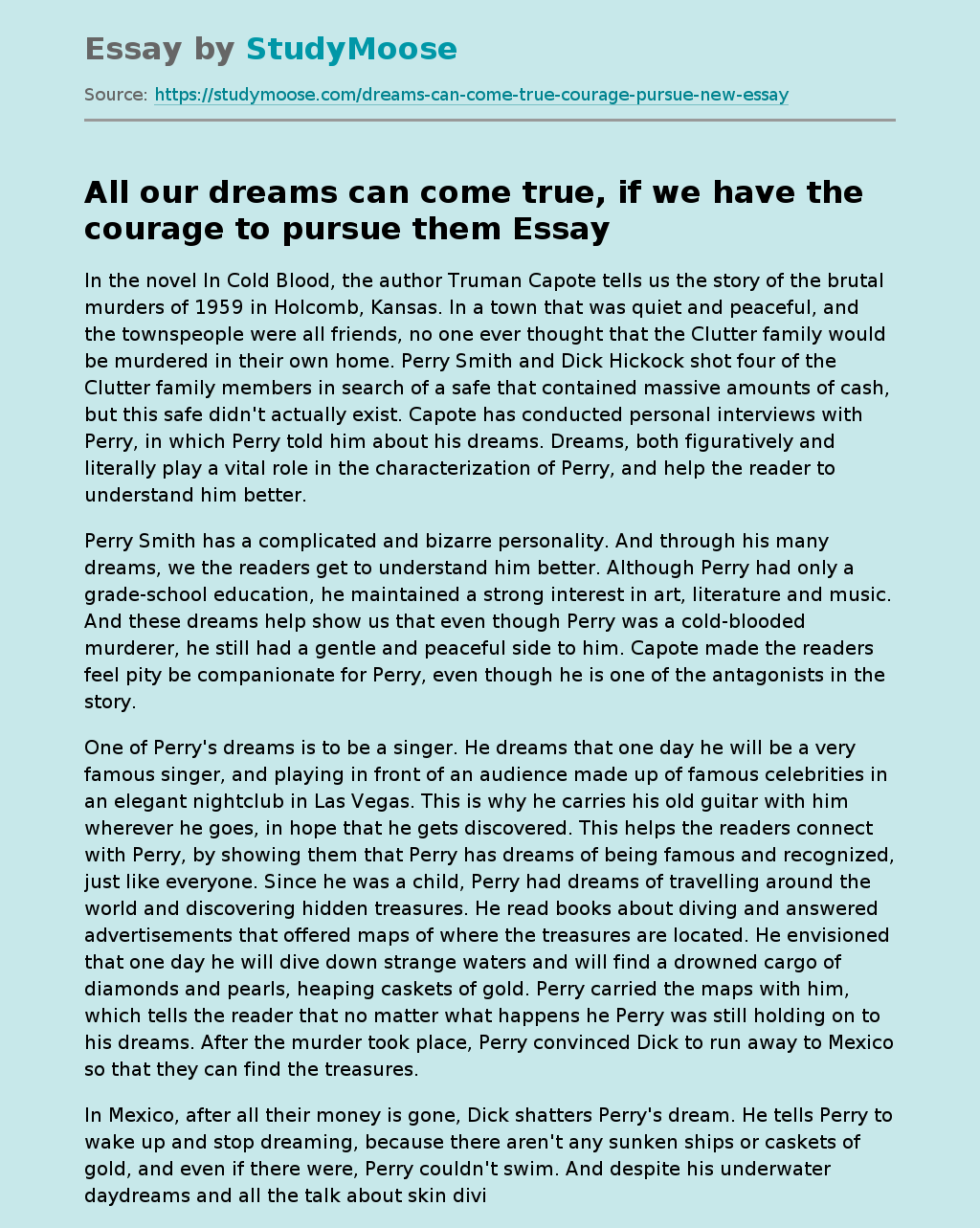