Social norms are the customary rules that govern behavior in certain group of individuals. These rules specify how one should behave, and it clarifies what may be considered normal or acceptable to society. The type of norm that I have decided to violate for this assignment is a folkway. Folkways are informal, unstated rules that govern society, unlike laws, which are formal written rules. Folkways are a behavioral adaptation that developed to make social life possible. They are considered less essential to the stability of society since it applies to everyday people.

Turn in your highest-quality paper
Get a qualified writer to help you with
“ Breaking Social Norms ”
Get high-quality paper
NEW! AI matching with writer

For instance Americans shake hands when meeting, while members of other cultures bow, or kiss. For this assignment I decided to stand outside the mall and hand shake individuals as they walk in and out of the mall.

Since norms consist of preferences, rather than demands the mechanism of social control results in sanctions. Whether informal positive or informal negative, these sanctions may result in a simile, or a dirty look.

This essay will explore the reaction of individuals when greeted by a stranger and the subsequent actions that resulted.

For this assignment I decided to go to South Coast Plaza Mall in Costa Mesa. South Coast Plaza is a place where a concierge will check your bags when your arms are too tired, where personal shoppers are at your service, and where your electric jaguar can get serviced while you shop or dine. Around the fancy cluster of shops are Prada, Burberry, Armani, and Tiffany & Co. At the same time you can also find a local McDonald’s, Beackworks, and a Sears at the other end of the mall. Due to its Cultural Diversity I decided to take on the challenge.

Considering this, I arrived the location around 10:00am (opening time) on Sunday September 30th. The multitude of individuals roaming the mall were mostly women in different age groups, varying between 20-60 years of age. About 10 people who are walking in and out of the mall are observing me, my intuition is that being a female will prevent these women from feeling harassed and accept my hand shake. As I stood outside the second level Macy’s Valet Entrance I approached the first individual, I extended my hand and smiled at this 20 something year-old Persian woman who pulled out of a white Escalade.

She asked if I orked there and if I could guide her to the concierge desk, but she never welcomed my hand gesture. I immediately removed my arm feeling very uncomfortable and guided the way. Breaking this social norm in this case caused a negative informal sanction, and as a result the woman disregarded my hand shake and left me feeling disapproval. The second individual I approached was a Hispanic woman in her mid 30s’ with a stroller in hand, and a 5 year-old boy who seemed very much interested in greeting me. To my surprise, she pretended to have her hands tied up, and asked her son to hold her hand so he would not get lost.

Being ignored is a negative informal sanction and it made me feel public ridicule along with rejection. However, a few minutes later an elderly Caucasian woman walking out with her granddaughter acknowledged my greeting. When her grand-daughter did not respond to my hand gesture she exclaimed, “Honey don’t be rude! Where are your manners? ” and the grand-daughter finally welcomed my hand gesture. The polite lady started talking to me about customs and traditions, and how people are not as polite as they used to be. She exclaimed that individuals are too focused on other things and forget their manners.

Aside from the previous experiences, breaking this social norm ended in positive formal sanctions; as a result of my gesture the lady smiled and complemented my actions. Correspondingly there were a few other individuals who accepted my greetings, while others looked the other way and pretended I was not there. Individuals who live accordingly to these norms often Theis?.. Almost every single thing we do in life is judged by a certain set of guidelines. When we are growing up, we are taught by our parents of what to do and what not to do.

Of course, every household lives by a different set of ideals and beliefs. It can be influenced by religion, the environment they live in, and what kind of government they abide by. However, the one constant which holds true in all households and societies are norms. Norms are established standards of behavior maintained by a society. Norms are important to a society because it pretty much keeps every citizen in a society in check with themselves and their behavior. Laws are not sufficient enough to keep a society at peace.

The two types of norms that exist are ormal and informal. Formal norms are pretty much what we call laws in our society, while informal norms are pretty much norms in which there is a mutual agreement among everyone in a society to follow. Norms can be viewed as all the petty things and the serious things combined in which all citizens should abide by. It can be more important than laws in their judgment on looks, whether it is the color of one’s skin, the clothes that one wears and even the way a person carries himself or herself, individuals make instant judgments based on these social prejudices.

This perception based on appearance determines the behavior towards the person. A Player Piano In our textbook, “Sociology: A Down-to-Earth Approach,” Henslin defines social control as a group’s formal and informal means of enforcing its norms. Two prime examples of social control are positive and negative sanctions. A positive sanction is a reward or positive reaction for following norms. A positive sanction could possibly be given to someone who tries to break and change norms in society for the advancement of the community. A good example of this would be Dr. Martin Luther King’s movement for civil rights.

A negative sanction is the opposite, an expression of disapproval for breaking a norm. These reactions can be severe and formal, or they can be mild and informal. How do these ideas of social control apply in the society created by Vonnegut in “Player Piano? ” In the book “Player Piano” by Kurt Vonnegut, there are many examples of positive and negative sanctions. A perfect example of sanctions affecting lives in a dramatic way was the aptitude test taken by all citizens. If you do poorly on it, then you have to live the rest of your life in the Army or in the Reeks and Wrecks. 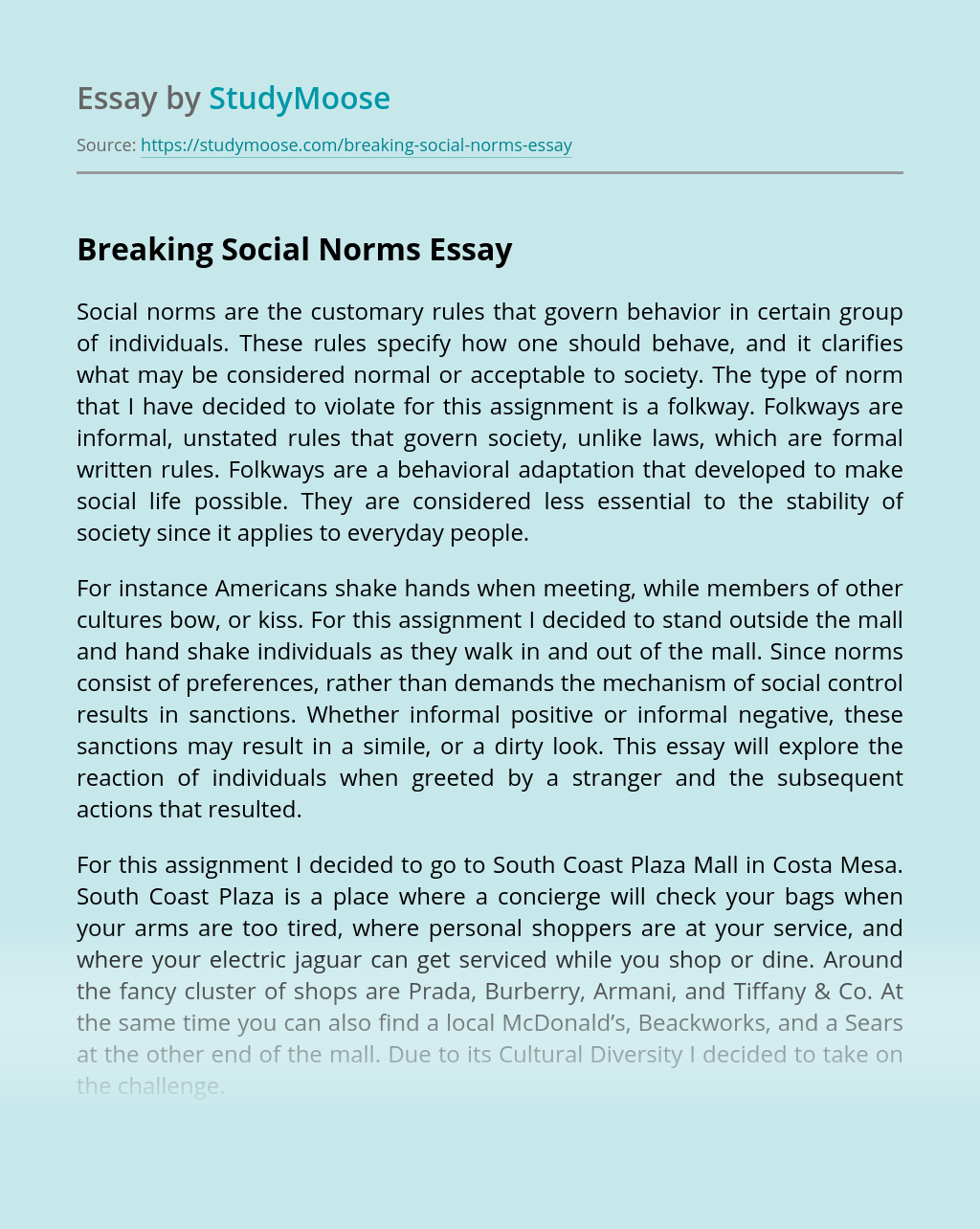 Turn in your highest-quality paper
Get a qualified writer to help you with
“ Breaking Social Norms ”
Get high-quality paper
Helping students since 2015
Stay Safe, Stay Original