As a sociology student I have some experience in the field of messing with social norms. When assigned to create a breaching exercise situation I can say I felt comfortable as opposed to the first time I was instructed to break a norm. Breaching experiments obtain to study people’s responses to disruptions of generally conventional social rules or norms. I will admit I had a few weird ideas that I have always been interested but had some difficulty finding the means to conduct these experiments.

Don't use plagiarized sources. Get your custom essay on
“ Breaching Exercise ”
Get custom paper
NEW! smart matching with writer

I narrowed down my options and came up with one that was more realistic and decided to purposely mistake shoppers for employees in department or grocery stores.

I conducted this breaching exercise in three different places over the past week. The first place I went to was Target. Everyone pretty much knows that the standard Target outfit involves a red polo, however there weren’t any red polo’s walking around that were not actual employees.

I came across a middle-aged man in a red t-shirt who was looking in the bath section and simply asked him, “Excuse me, could you direct me to the electronics section?” His reaction wasn’t anything to look into; he simply just laughed and explained that he doesn’t work there. He looked down at his red shirt and thought I just made an honest mistake. I gave a shy laugh; acting embarrassed, apologized and walked away.

The second place I visited to try this experiment was Walmart. I walked into Walmart with a friend and went to the gardening section.

I decided to come up with a little story rather than just asking a direct question. I found a man who looked like he was in his young 20s and started rambling, explaining that I had a big project I was working on for my outdoor patio and I wanted a specific look. He let me ramble on for about a minute and a half before he cut me off by explaining he was shopping for his own patio furniture and would be no help to me. He didn’t seem to think it was as funny as the first man, however he still acted kind.

Lastly I went to Harris Teeter to experiment in a grocery store. I felt that maybe the type of store I mistook a shopper for being an employee would make a difference. I was right. I felt quite bad about this situation after leaving in all honesty because I had no clue it was going to be as offensive as it was. I found a woman around the breads who looked like she was in her 50s. I asked her if she could tell me where her gluten free bread section was.

She had quite the attitude when she responded explaining that just because she looks some type of way does not mean that she is an employee. I felt bad because I did not want her to think I thought she was an employee because of her appearance, I just got confused and frustrated because I couldn’t find what I was searching for. She calmed down a bit and we both apologized for the miscommunication and I quickly decided to be on my way.

This experiment is definitely interesting however should come with a warning. I would never personally offend someone like this, and had I known that I would have I would have reconsidered my exercise, however I was happy with my results varying. It was good to have different results to work with and think about once it was completed. I thought about the differences between the people and the stores I visited and tried to understand where each individual I approached was coming from by their reactions. 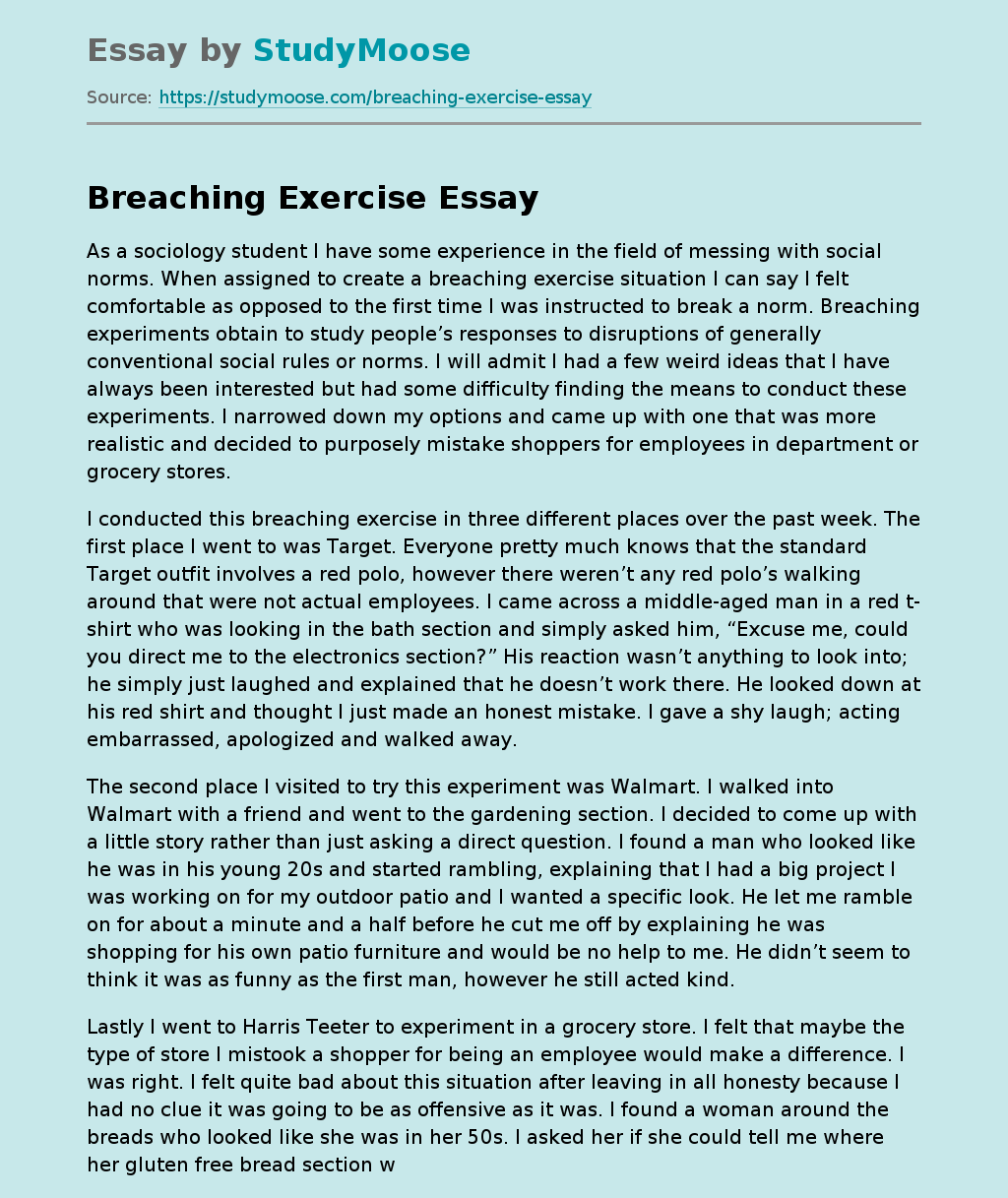