Are Social Norms a Form of Oppression or a Necessity?IntroductionSocial norms can

Are Social Norms a Form of Oppression or a Necessity?IntroductionSocial norms can be defined as a set of unwritten rules of behaviour that are considered acceptable in a group or society. This can range from something as simple as the way you greet a person, to the way you dress.Social norms encompass the behaviours that shape our society. They are quite simply man-made, and yet we find ourselves being led by, as opposed to leading these social conducts of behaviour.

Don't use plagiarized sources. Get your custom essay on
“ Are Social Norms a Form of Oppression or a Necessity?IntroductionSocial norms can ”
Get custom paper
NEW! smart matching with writer

I chose this topic because it resonates with some of the most fundamental aspects of my everyday life. I see it everywhere, and I feel inclined to question it because I never really have. Not only do social norms heavily impact our perception of other individuals, but they also have more of an influence over the way we move through life, than we are willing to admit. When exploring the topic of social norms, the notion of normality must also be questioned.

Some sociologists argue that normal is a social construction, others argue that it is somewhat biological, but ultimately, it cannot be denied as prevalent within any society (regardless of a variation in culture or beyond the bounds of time). So, why is this question important? Well, through it I seek to shine a harsh light on aspects of human conduct and behaviour that a predominant amount of people have become complacent with. It could be said that we hold the power because it is us who define what normal is, but if these norms seep out of the confines of human control can they begin to limit individuality, and restrict social liberation?My chosen question looks at two extreme ends of a spectrum, when stripped back it examines the effect of social norms in societies (cross-culturally and cross-temporally) and delves into the prospect of a society without social norms.

Are Social Norms a Form of Oppression or a Necessity?IntroductionSocial norms can. (2019, Aug 20). Retrieved from https://studymoose.com/are-social-norms-a-form-of-oppression-or-a-necessityintroductionsocial-norms-can-essay 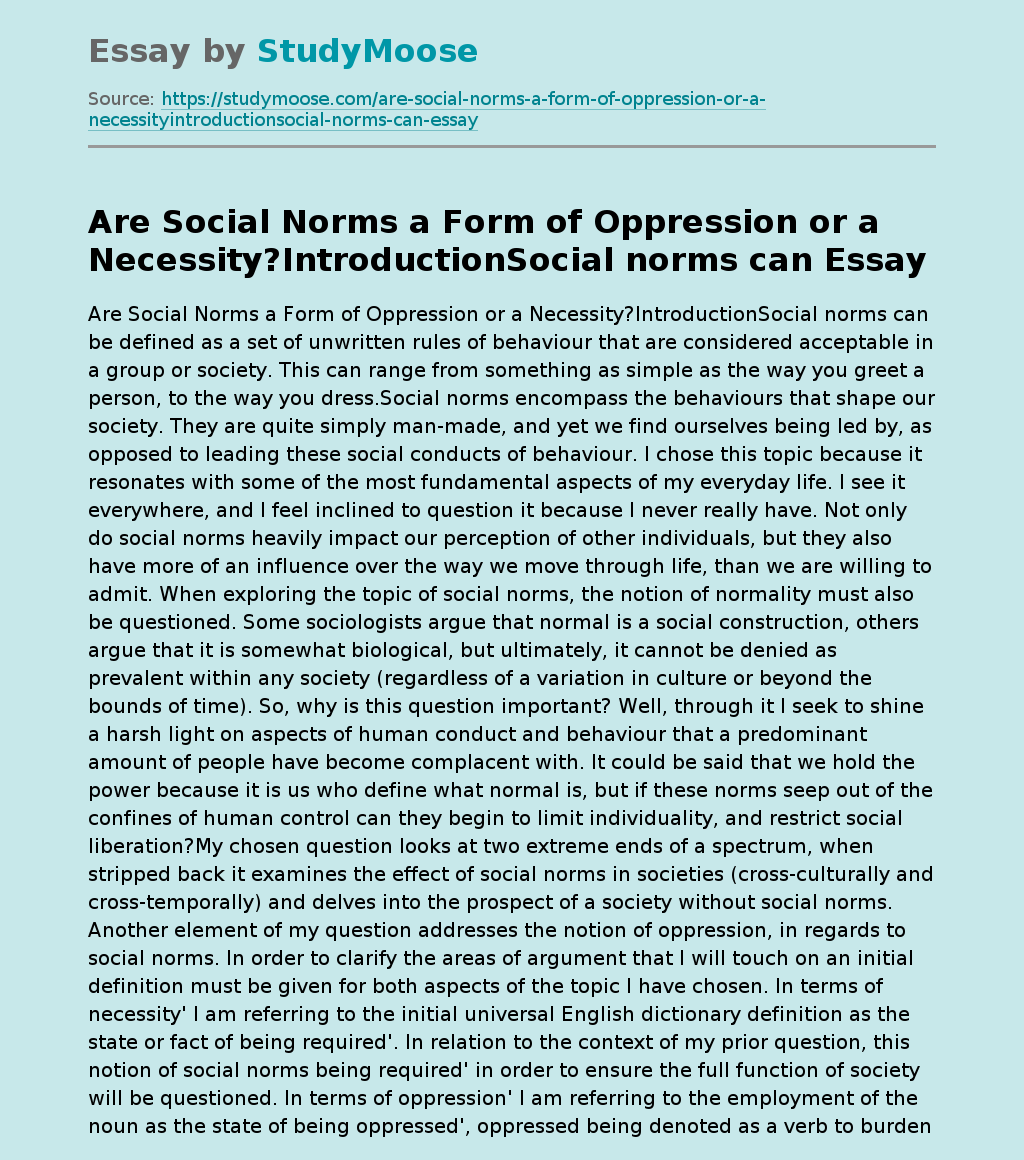