The Martin Luther and the Protestant Reformation

Martin Luther, who was born on November 10, 1483, was a theologian and the primary architect of the Protestant Reformation. He viewed the Roman Catholic Church, the main Church of the time, as corrupt. To Luther, the clergy put into effect various traditions and customs to gain wealth. He felt that he needed to take action and did so with a profound effect. Martin Luther’s actions were the cause of the reformation of the Catholic Church.

Martin Luther objected to the selling of indulgences by the Church.

Don't use plagiarized sources. Get your custom essay on
“ The Martin Luther and the Protestant Reformation ”
Get custom paper
NEW! smart matching with writer

An indulgence was a written note with the seal of the pope, which when sold to any person, absolved that person of their sins. This angered Martin Luther because it was morally corrupt and went against the notion of confession. Originally a person would go and confess their sins and then get absolved by the priest. Now, people would buy a formal document stating that they have repented and be automatically absolved. Martin Luther saw indulgences as a way for the clergy to become wealthy and spend the common man’s money for their own personal interests.

He criticized the Church by writing his 95 Theses. The 95 Theses blasted the Church about all the corrupt practices that were being implemented and how greed had overtaken the Church hierarchy. Some Church officials had broken their vows of celibacy by having sexual relations thus outraging Martin Luther. The clergy no longer cared for people; rather they used them to their advantage. He chastised the Church for the flaws in its teachings and he felt he could no longer see any reason to follow it.

Martin Luther nailed the 95 theses onto the local cathedral door in Wittenberg. These were soon translated and distributed all over Europe in a matter of weeks with the help of the movable-type printing press. Martin Luther thought that it would be suitable if he translated The Bible from Latin into his native Germanic language.

It would become more accessible to people since not everyone at the time was able to read Latin. When he first produced the Bible, it was printed in sizable numbers via the movable-type printing press and was quickly distributed around the Holy Roman Empire. Since the Bible was now more accessible, people stopped going to visit the priest but instead consulted the Bible. This created a problem for the Church because now everyone could ignore them and nobody would come to mass on Sundays and donate money to the Church. Martin Luther presented these indictments of the Catholic Church, hurting its reputation.

The Catholic Hierarchy had also collected personal wealth by selling indulgences and had used it as a way to construct fancy statues, buy art, build churches and cathedrals, and palaces, etc. The Church was acting more like a business than an actual religious group. He devoted his time to translating the Bible from Latin into a Germanic language so that he could make sure that people knew what Christianity was really about. Martin Luther created a new way of practicing Christianity called Protestantism. As he spread his ideas through his papers and the Bible, people began to understand the scandalous actions of the Catholic Church and some decided to completely ignore the Church hierarchy. This is what created the divide between Protestants and Catholics.

The Martin Luther and the Protestant Reformation. (2016, Oct 21). Retrieved from https://studymoose.com/the-martin-luther-and-the-protestant-reformation-essay 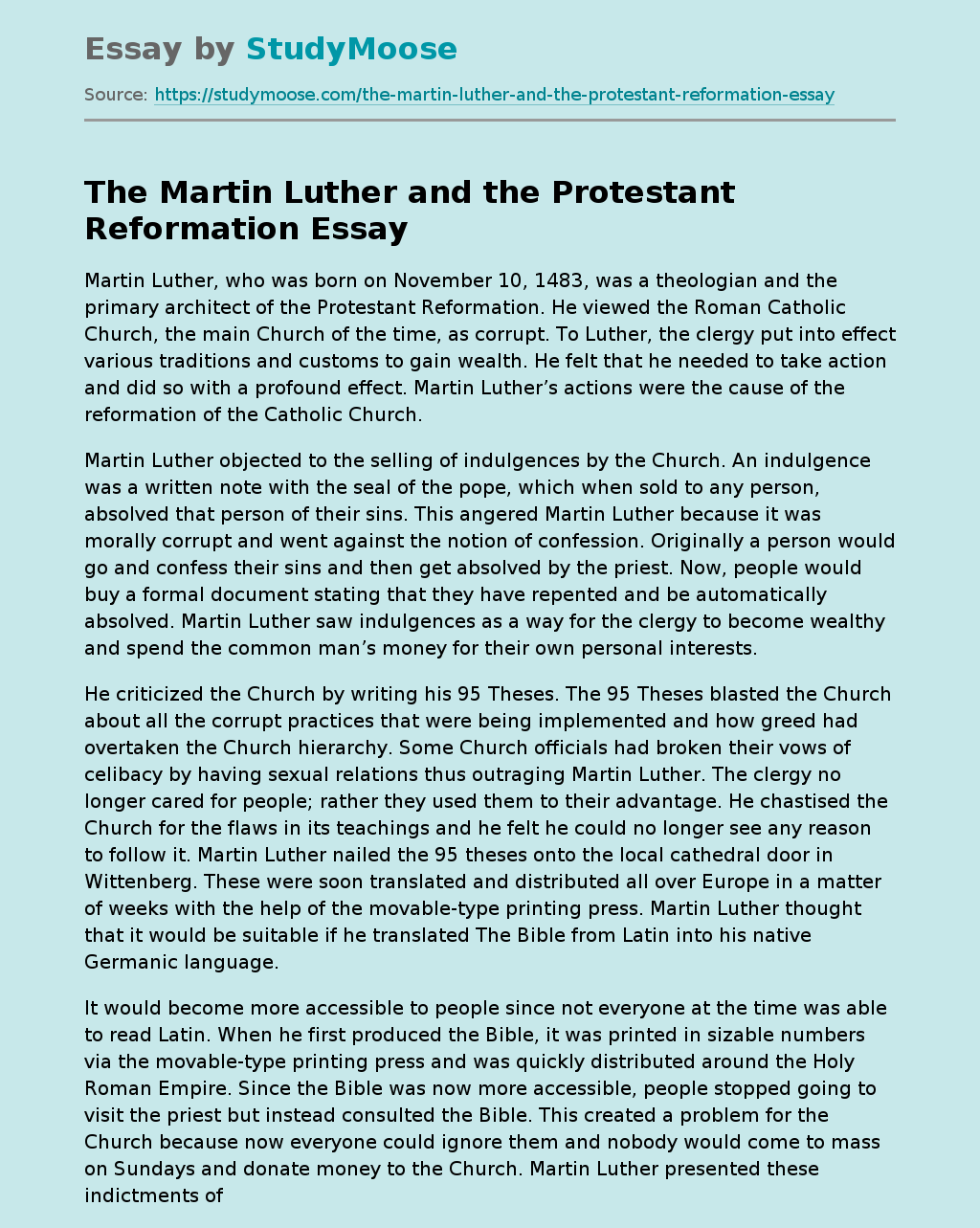