Abstract: Charlotte Bronte’ masterpiece Jane Eyre symbolized a new era in the history of literature. It awakened women’s awareness to be independent. It brought about a completely new concept of marriage and of the value of life to a woman. That is marriage should base on true love, equality and respect rather than social ranks, materials or appearance. Marriage should be the combination of souls as well as bodies.

The heroine of the novel Jane Eyre has successfully demonstrated the image of a woman who is intelligent, independent, kind-hearted and most importantly, brave enough to say “no” to the social conventions and live up to her principle in life.

Don't use plagiarized sources. Get your custom essay on
“ Feminism in Jane Eyre ”
Get custom paper
NEW! smart matching with writer

The author Charlotte Bronte is acclaimed to be a pioneer in the campaign of feminism. This essay is to explore and appreciate the spirits of feminism reflected in this novel and also reveal the limitations in demonstrating the concept of feminism. Key Words: Jane Eyre, feminism, limitations ?. Introduction:

In the 19th century, women were considered to be appendages to men.

Marriage and family life were the whole world to women. Women depended upon men physically, financially and spiritually. This essay is to explore and appreciate the spirits of feminism reflected in this novel Jane Eyre, whose author took the lead in the campaign of feminism. There are three parts in the process of demonstration. The first part is about the oppression laid by the four main men characters on Jane. The second part is about three main women characters and their images in this novel.

The last part is to point out some limitations of the author when illustrating feminism. ?. Body 1. Men’s oppression upon women The novel was written in the early 19th century when men played a dominant role in society. Women were considered to be inferior to men. All that women were supposed to do was follow the instructions of men and be the subsidiary addition to men’s life. Four men in Jane’s life had laid oppression on her in different degrees. Jane survives the oppression and led herself constantly to her own desirable life. 1. The oppression from John Reed

The first male character to oppress Jane was her cousin John Reed, who in part made little Jane live in shadow and fears when she was only a young girl. The boy hit Jane whenever he felt like only because Jane was an orphan. Poor little Jane could do nothing but bear the hurts both physically and spiritually. At last, Jane’s feelings of hatred and indignity went out of control. For the first time, Jane stood up and fought back when John hit her again. Her cry of “ Wicked boy” at John declares her determination to fight against this unfair world.

This quarrel and fight led to her life in Lowood in which she felt much happier. 2. The oppression from Mr. Brocklehurst Mr. Brocklehurst represents those who had firm belief in women-inferiority theory. He demanded the girls in Lowood to wear ugly or even broken clothes, eat far-from-enough harsh food and led a hard life. In his opinion, girls should lead a simple life in order to cultivate the virtue of subordination and dependence. He once insulted Jane in front of Jane’s teachers and classmates. He claimed Jane to be a wicked girl only because Mrs. Reed, Jane’s Aunt, told him so.

Though depressed and heart-broken, Jane finally showed with her own deeds to her teachers and classmates that she was not a wicked girl as Mr. Brocklehurst claimed. 3. The oppression from Edward Rochester Even Edward Rochester, Jane’s lover, wanted to lay some oppression or control upon Jane. Before their marriage, he wanted to use the necklace to circle up the thoughts and feelings of Jane. He wanted the ring to restrict Jane’s actions. Further, he wanted the beautiful wedding dress to change Jane’s appearance a little bit. Though at first, out of the love for Mr. Rochester, Jane intended to give in, but in the end she refused all of them.

She just wanted to act what Jane was like and preserve her own unique characteristics. 4. The oppression from St. John St. John hold absolute faith in the social convention that a woman’s value was realized only when she devoted her life to a man. He took it for granted that it was the privilege and honor of Jane to go to India with him and help his work as his wife. He thought Jane would agree with him at last because it was what a good woman should be like. Jane firmly declined this idea because she wanted a marriage based on true love and mutual understandings. 2. The image of women characters

The heroine of the novel Jane Eyre has undoubtedly succeeded in building up the image of a woman who has the courage to fight against the unfair reality and pursue the equality in life. She calls for women to struggle for and be the mastery of their own lives. During the whole story, Jane serves as a positive character. By the development of Jane’s thoughts and feelings, the author conveys the spirits of feminism. Miss Blanch Ingram serves as a contract character against Jane. She represents the typical girls from noble families in that time. All she wanted was to find a rich man to depend on and get married with him.

In her opinion, a woman’s duty was to make her appearance attractive and beautiful in order to win the heart of a rich man. Marriage should base on social ranks and money only and husbands and children are the whole world for a woman. Her rude behaviors and contempt upon “ordinary” people have fully illustrated her lack of cultivation and education. The image of Miss Blanch Ingram also symbolized the women victims of the social conventions. They lost their soul or even lost control of their bodies and they didn’t have the slightest idea of the value of a woman’s life. hey lived and were quite willing to live as the belongs of men.

The mad women living on the 3rd floor arouses readers’ suspicion and speed up the development of the plot. In addition, she helped to turn on a new page of Jane’s life (Rosemarie Putnam Tong, 1998). Because of the terrible set by the mad woman, the Thornfield was reduced to ashes and Mr. Rochester became blind and lost one arm. Everything in the past had become history and a new chapter in Jane’s life had opened. In Ferndean Manor, a quiet and peaceful place, Jane and her beloved Mr.

Rochester began to lead a new life in which Jane was no longer inferior to him and Jane’s stature has changed because she was rich thanks to the heritage from her dead uncle. 3. The limitations in demonstrating Feminism It’s beyond any doubt that Charlotte Bronte has brought about the idea of feminism in this novel but she failed to demonstrate the concept perfectly. The spirits of feminism are supposed to advocate equality between men and women (Rosemarie Putnam Tong, 1998). The reason why the author failed is she demonstrated the concept of “equality” partially. In the relationship between Jane and Mr.

Rochester, Jane was a relatively stronger character. At the first time they met, Jane helped the injured Mr. Rochester and at the end of the novel, Jane helped Mr. Rochester to deal with his daily life because of his blindness and disability. Furthermore, Jane was rich while Mr. Rochester turned poor, old and ugly. The author seems to arrange their marriage in this kind of condition on purpose. In Jane’s preparation for her marriage when she was still a governess in Thornfield, she refused all the jewelry or beautiful dresses Mr. Rochester had prepared for her. She didn’t want to be changed into another woman.

The very reason for this kind of feelings and was Her refusal of the offer is due to her strong sense of inferiority. She was poor and her social status was low at that time. The author didn’t’ arrange Jane’s marriage in the condition. Instead, Jane got married with Mr. Rochester when she was rich and Mr. Rochester was poor due to the big fire. Only in this circumstance, Jane was willing enough to marry Mr. Rochester because “I love you better now, when I can really be useful to you, than I did in your state of proud independence, when you disdained every part but that of the giver and protector” (Charlotte Bronte, 1975:451).

Jane’s marriage was in fact based on a kind of incompleteness and inequality at least in terms of the couple’s physical conditions and social status. Charlotte subtly conveys the idea that feminism can be realized only in an incomplete marriage. The readers would be a little distressed when intelligent, kind-hearted and independent Jane gained her happiness in this way. The concept of feminism the author conveys to some extent goes to extremes. ? Conclusion The novel Jane Eyre successfully constituted an intelligent, kind-hearted and independent woman image.

It arouses people’s awareness of feminism. The four men characters’ oppression upon the heroine Jane reveals the low social status of women in that period of time. The three women images in the novel represent different thoughts or ideas among women in that age. The novel serves as a pioneer in the cause of women’s liberation though it fails to convey the concept of “ feminism” to the fullest extent because it fails due to its failure to balance the equality between men and women. 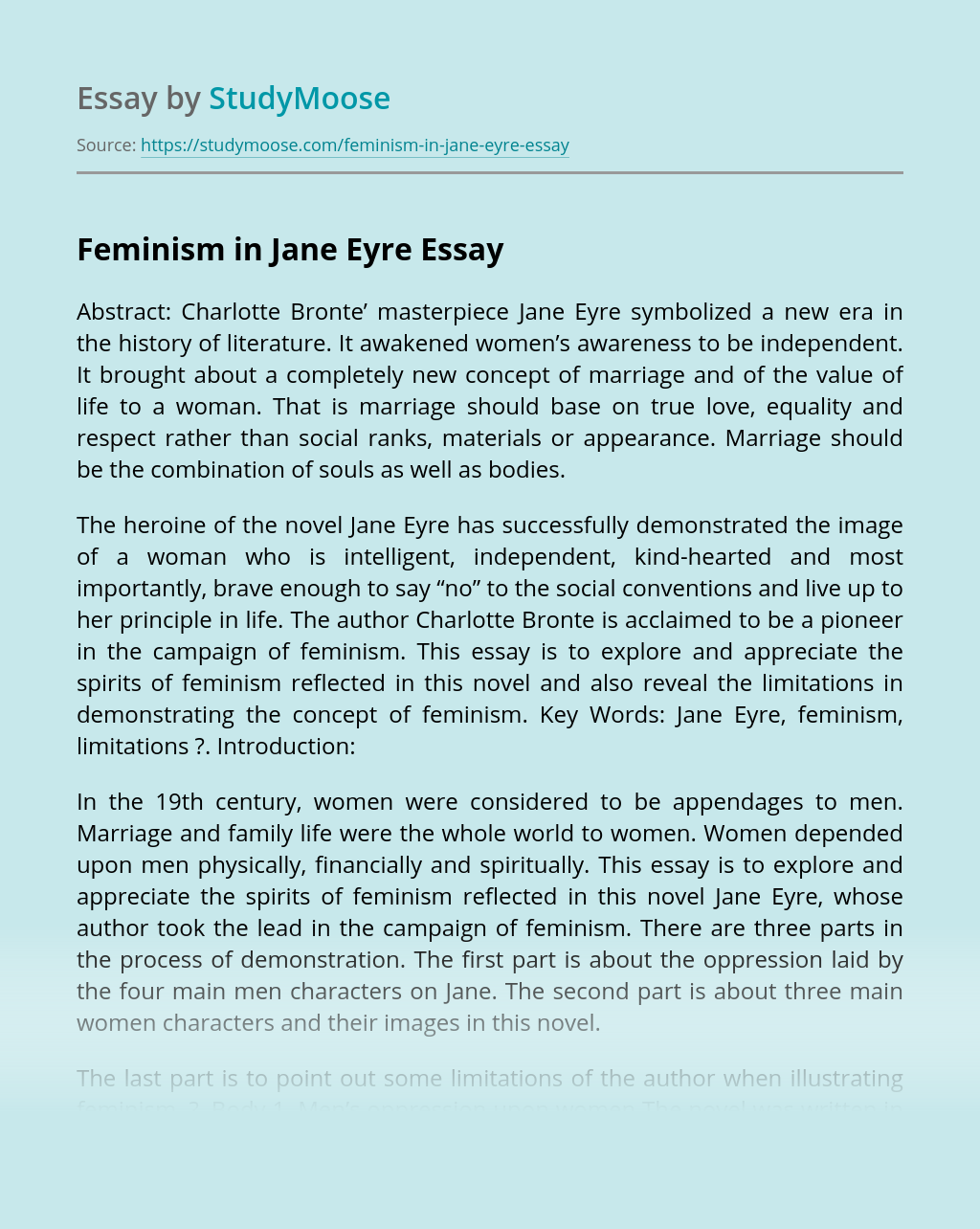