Assess the sociological explanations for ethnic differences in educational achievement

According to the ethnicity department for education, there are major differences in levels of educational achievement between pupils of different ethnic minorities (EM) groups, the 2014 statistics say that Chinese and Indian children achieve the highest out of the rest of the EM groups.

There are both external and internal factors to explain ethnic differences in educational achievement.

One external factor is, in terms of social class, those from a Black Caribbean, Pakistani and Bangladesh (B/C, P, B) background are more likely to be from low-income households, experiencing poverty and unemployment and as a consequence this material deprivation means that they will be unable to provide their children with the books, tuition and nutritious diet to do well at school.

Don't use plagiarized sources. Get your custom essay on
“ Assess the sociological explanations for ethnic differences in educational achievement ”
Get custom paper
NEW! smart matching with writer

Whereas, in contrast, those from an Indian and Chinese (I, C) background are less likely to be eligible for free school meals as they families are more likely to be professional business middle-class.

Another factor is Language which has also been examined as an indicator for differences in ethnic minority achievement.

For many EM students, English is a second language and their difficulties in communicating may be viewed as a lack of ability by teachers. However, both Driver and Ballard and also Modood found that Asian and white students had a similar level of language development by the age of 16 with it only being a temporary disadvantage for Indian pupils.

Furthermore family life is a factor, with Bhatti’s study of B, P and I parents showed how parents had a high level of interest in their children’s education which was supported by close family and community ties.

However, as shown by Moon and Ivin’s telephone survey, B and P parents lack the cultural capital to be able to assist their children with their homework and may be less familiar with school processes and organisation. Whereas in contrast, I and C parents will be able to use their cultural, material and social capital to assist their children at home but also with negotiating the school system to their advantage.

There are also a number of internal factors for ethnic differences in educational achievement.

One internal factor is media, which plays a big role in demonising the black Caribbean EM into folk devils, Wright said that racism happens in school because of the media which gives negative labels to students and creates stereotypes, and however she also said that some teachers have stereotypes but choose not to bring it in to the class room. This contributes to racial stereotypes that teachers have of black pupils, supporting Gillborn and Youdell’s research that teachers have ‘racialised expectations’ of black pupils which contributes to a ‘cycle of conflict’ between teachers and students. As black pupils attract negative labels, they are more likely to be put in lower streams and sets and in terms of educational triage are seen as the students who either need help to achieve to cross over the C/D borderline or those with ‘no hope’ of achieving which consequently contributes to a self-fulfilling prophecy of failure.

This negative perception of black pupils and association with gang culture, was highlighted in the LDA report (2004) where one Black Caribbean (B/C) pupil commented that, ‘when it is white boys it is a group, but when it is black boys, it is a gang’ showing how the relationship between B/C students and white teachers is one based on ‘conflict and fear’. The labelling of students inevitably leads to different student responses, with those that conform most likely to be I and C students who are viewed as the ‘ideal pupils’ whilst Sewell and Hall have recognised how black students can create a ‘culture of resistance’ to school and rebel or retreat completely from the school culture and values.

With regards to teacher racism, the Swann Report found evidence of unintended racism with Bhatti’s study of Bangladeshi (B), Pakistani (P) and Indian (I) students showing how teachers ignored students, didn’t give them responsibility and often treated them unfairly by picking on them. So though Indian students are high achieving and seen as ‘ideal pupils’ they may still experience racism at school.

Another aspect of the school which has been highlighted is the ethnocentric curriculum. Despite attempts to provide a ‘multicultural education’ according to Troyna and Williams, there is evidence of ethnocentrism which means that Asian and blacks students feel frustrated and disillusioned with the school system. Examples of ethnocentrism include History and other textbooks carrying degrading images of non-white people, with black people often viewed as ‘evil’ and white people as ‘good’. Whilst others have commented on how uniform and dress requirements with arrangements for PE and games also potentially undermining the confidence of ethnic minority students for example, Muslim girls expected to wear skirts which goes against their cultural and religious expectations.

To conclude, despite these concerns about racism within schools, I and C still outperform every other group despite being taught the same curriculum and being subject to the same school rules etc. Also it has to be noted that not all school teachers are racist whilst not all students end up with a self-fulfilling prophecy of failure. Additionally it must be noted that when looking at educational outcomes of students, ethnicity cannot be considered in isolation, social class and gender also need to be taken in account – with research showing that social class has 5 times the impact than any other factor on educational achievement. 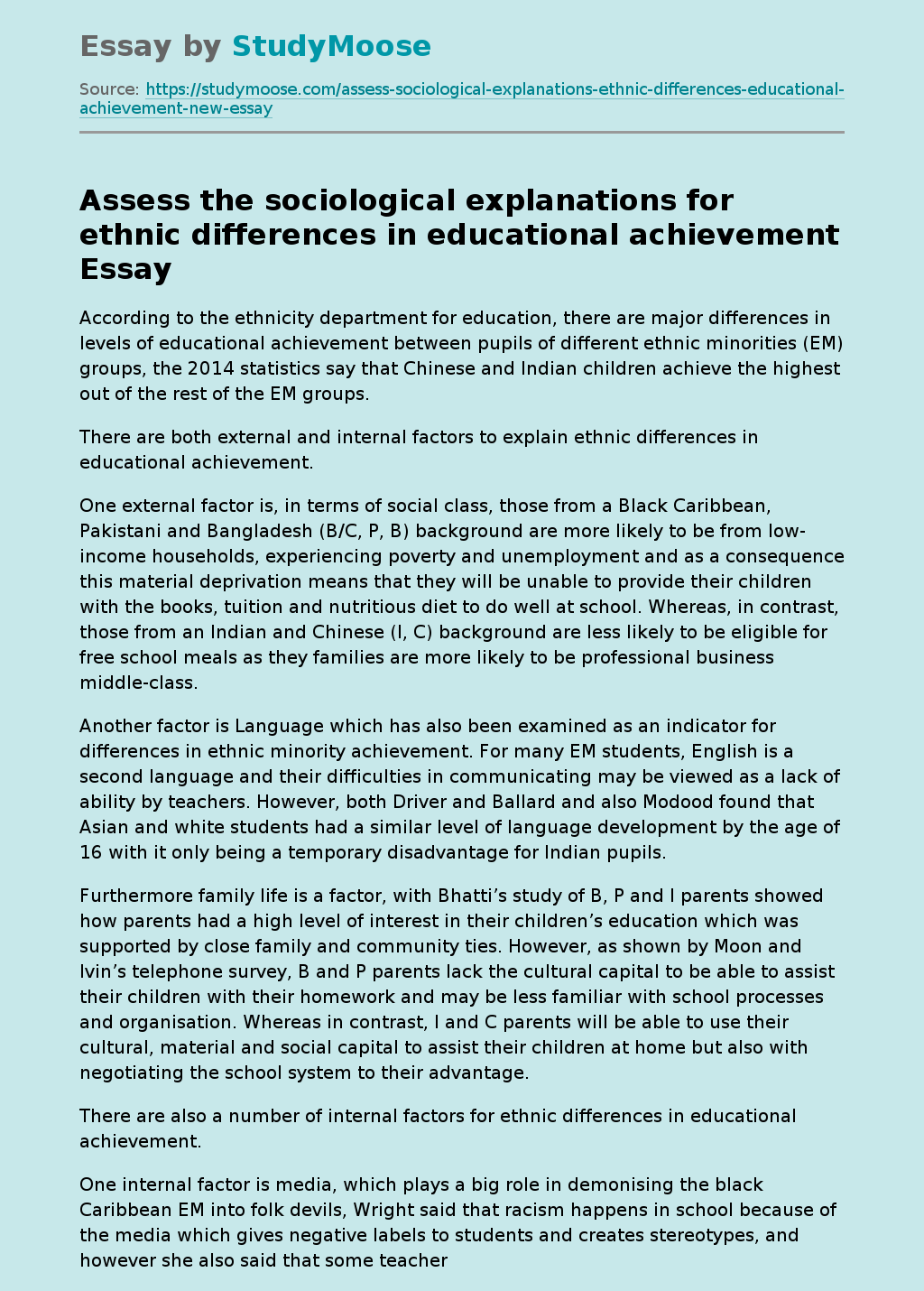