The poetic techniques used in Robert Frost’s ‘The telephone’ Essay

Robert Frost’s “The telephone” is a poem about an individual’s interpretation of a telephone conversation with another. The speaker in the poem talks about a meeting with the same person that had happened in the past showing that there is some history and that this is a sequel to another conversation. We see constant misconceptions between both people, and in this respect it is a sort of rebirth and a sort of familiarity between the speaker and the person on the corresponding end.

Don't use plagiarized sources.
Get Your Custom Essay on The poetic techniques used in Robert Frost’s ‘The telephone’ Just from $13,9/Page

Through the poem we see Frost relating the phone metaphorically with natural things, in this way he also personifies the object he is relating to the phone. He relates the telephone to being a “…flower…” and thus relates the phone with a beautiful sweet smelling flower. In this respect, we come to the conclusion that the person on the other end is very close to the speaker, a significant other. Frost also links the flower with a “…bee…” making a clearer link with nature.

The bee almost makes a melodious humming sound further describing the sound of the person on the other end. Frost uses ranges of metaphors throughout the poem to tie in with his link from the telephone to nature.

Frost makes the poem first person singular to get an insight of the speaker and his real thoughts. He also uses the word “…you…” to get the reader involved, but symbolically we know he is referring to the other person. Using this method of first person, Frost is successfully making the conversation more genuine and in some sense more truthful. And so by using the words “…I…” and “…you…” the poem becomes more realistic and gives us a look into the speakers thoughts making the poem a persona.

The structural formation of the poem is irregular. Frost begins with a nine line stanza followed by a one line stanza. This slows the poems flow and lets the reader collect their thoughts. He goes onto having a seven line stanza followed by a pair of one line stanzas. This random structure in a way shows us that the speaker, who is reminiscing on a past confrontation with the same person, has random remembrances of what was said. This is also mirrored in the poem by the speaker’s questions and attempts to revive the other person’s memory “…Do you remember what it was you said?” And thus by using this sort of irregular formation, Frost does not have any restrictions in the rhyme or rhythm although the poem does contain fair amounts of rhyme.

Right through the poem, there is a lot of juxtaposition. Frost uses words such as; “…was…still…did…” to contrast with the words representing the present; “…today…” This presents yet another concept of what the speaker is dealing with. He is dealing with the restraints of time which only make life travel faster. Yet also this gives the reader a better look at which angle the speaker is coming from. Thus using juxtaposition, Frost can make a further relation with the reader and also bring in history to make the poem more relevant.

In conclusion, “The Telephone” by Robert Frost, is an overview of a telephone call the speaker makes. This conversation is linked with nature and natural elements to make the poem more down to earth. The first person in the poem, make it more personal and the juxtaposition makes the poem more relevant to the audience.

The poetic techniques used in Robert Frost’s ‘The telephone’. (2016, Jun 30). Retrieved from https://studymoose.com/the-poetic-techniques-used-in-robert-frosts-the-telephone-essay 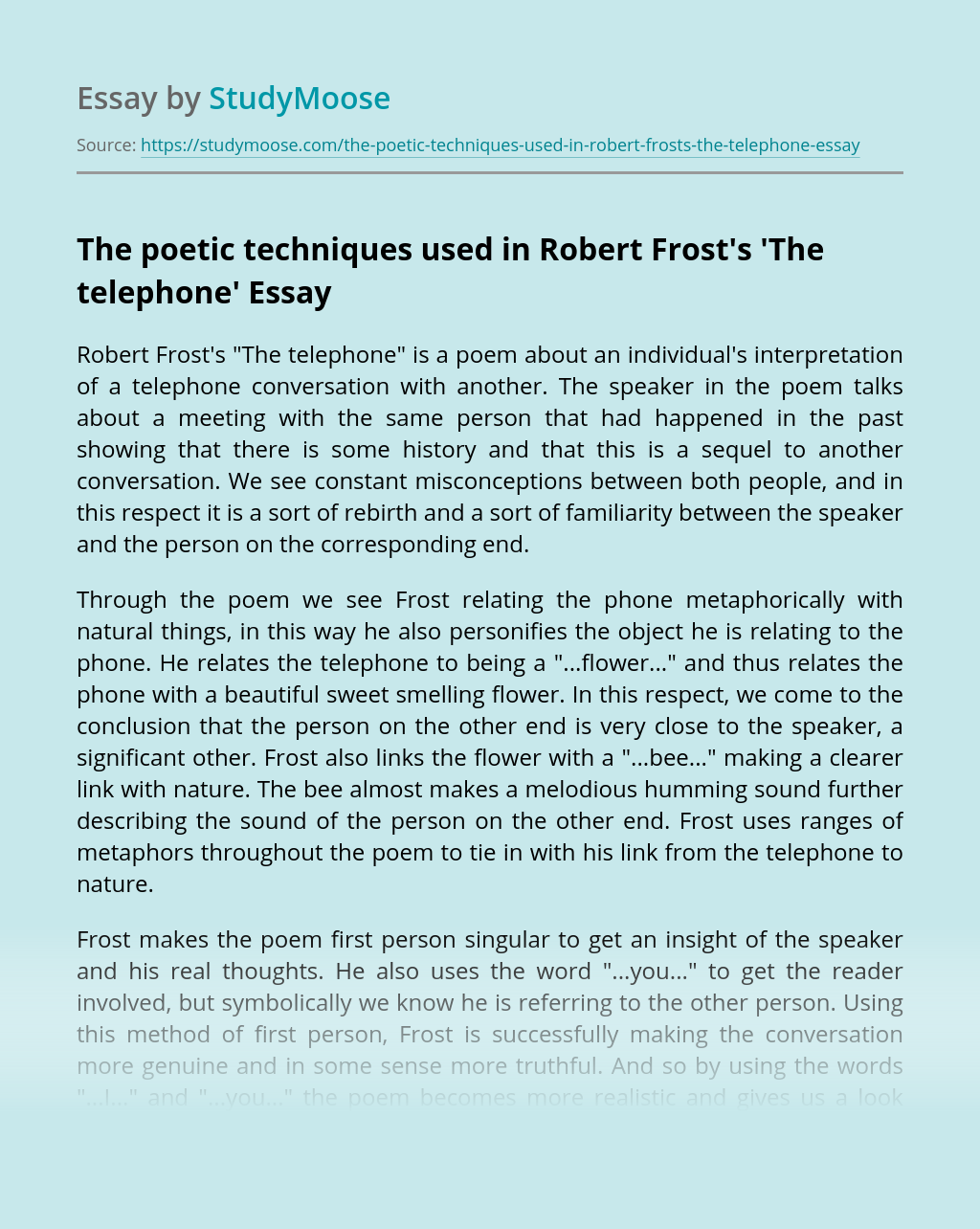