“Nothing Gold Can Stay” by Robert Frost

“Nothing Gold Can Stay” by Robert Frost focuses on the idea that nothing lasts forever. The poet uses a central metaphor and personification to express his idea. The poet uses figurative language such as controlling metaphors, personification,and allusions and is specific in his choice of words.

“Nature’s first green is gold” (Line 1) is the first line the is the main example of the controlling metaphor. The color green is compared to gold, which is precious. What he means by this is that things may start out good, but they will not always last.

Don't use plagiarized sources. Get your custom essay on
“ “Nothing Gold Can Stay” by Robert Frost ”
Get custom paper
NEW! smart matching with writer

There is personification in the poem, which is how Frost is referring to nature as ‘her’ ( Line 2 and 3). Her early leaf’s a flower,but only so an hour, by this he means that good things can last a while, but then will come to a drastic end.

He used words like subsides, grief and Eden to represent “Nothing Gold Can Stay.”( Line 1)Here, he means that everything has to come to an end sooner or later. Eden is a state of happiness, that soon came to an end due to the choices made by Adam and Eve.

Frost uses many examples of allusions in this poem such as, the brightness like that of gold’s reflective dazzle, that becomes dulled with time, and the Biblical paradise of Eden that was lost when Adam and Eve fell from the Creator’s good graces.

The allusions are to help create a picture in the readers’ mind of what the poem is about, for example with the line “Nothing Gold Can Stay” (line 1) it is saying that nothing good (gold) will last forever. Frost is specific with his word choice. He uses words like “Eden sank to grief”( Line 7) Eden sank to grief because Adam and Eve ate some kind of fruit off of the tree they were told not to eat from. When they ate from the tree the Creator forbid them from the garden of Eden.

Frost uses many different ways to help put a picture in the readers mind. He uses allusions, personification and metaphors.“Nothing Gold Can Stay” by Robert Frost focused on the idea that nothing lasts forever. The poet used central metaphors and personification to express his ideas.

“Nothing Gold Can Stay” by Robert Frost. (2016, Nov 17). Retrieved from http://studymoose.com/nothing-gold-can-stay-by-robert-frost-essay 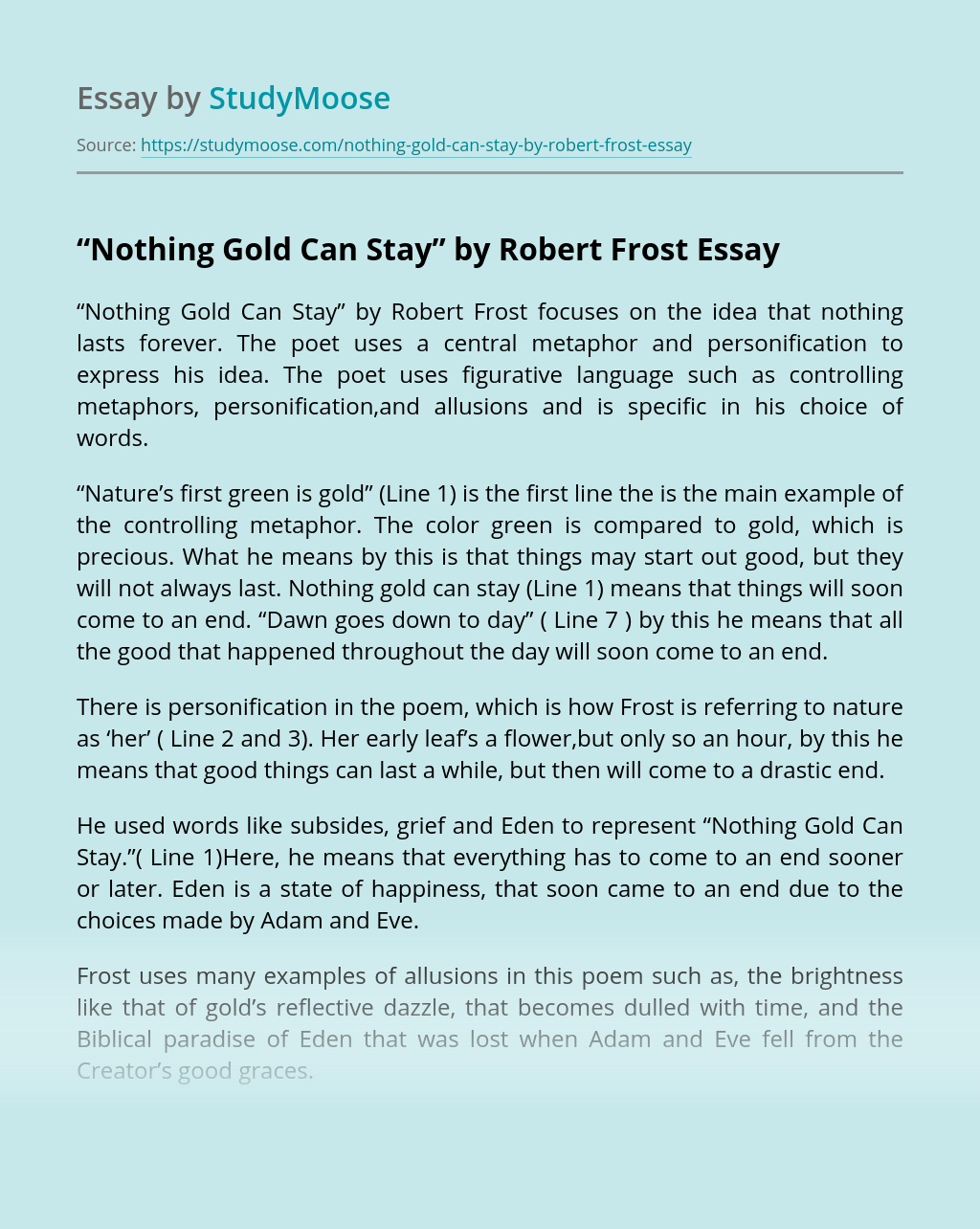