This paper will be an analysis of Theodore Robert Bundy a famous serial murderer who killed over a span of 4 years in the 70’s. This paper will discuss some of the developmental and situational factors that might have contributed to his reign of terror. It will also discuss the early years of his life as well as touch base on some of his crimes.

Theodore Robert Bundy was born on November 24, 1946 to Eleanor Louise Cowell, he was born at the Elizabeth Lund Home for unwed mothers.

Don't use plagiarized sources. Get your custom essay on
“ Analysis of Ted Bundy Serial Killer ”
Get custom paper
NEW! smart matching with writer

He was conceived out of wedlock , his father was unknown but it was listed on his birth certificate it was a sailor by the name of Jack Worthington. Who his mother supposedly had a fling with but that could never be proven(Sullivan, 2009).

Since Bundy was born out of wedlock and his mother did not want to be the talk of the town, she led everyone to believe that Ted was her brother and her parents were his parents and she lived this way for 4 years in Burlington Vermont with her parents until she decided to leave town and take Ted with her.

After about 4 years Ted and his mother moved out of Burlington Vermont and they settled in Tacoma Washington where his mother legally changed his last name to Nelson, for reasons which is still not clear. But within a year Louise Cowell met a young man by the name of Johnny Culpepper Bundy and they were married, and that’s when Ted’s last name was changed again for good to Bundy(Sullivan, 2009).

Bundy grew up in Tacoma Washington and he graduated from Woodrow Wilson Highschool. He was not very popular, kept pretty much to himself. He was quoted as saying he really did not know how to interact in a group. He would mimic people’s actions and responses in order to appear in a social setting(Aynesworth, 2000).

It is not known how early in life Ted Bundy began killing, but there was an early sign of abnormalities in his personality. As a young child his own family saw a difference in his behavior. One minute he was fine and then the next he would morph into this whole other person. His aunt recounted and incident when she had awoken from a nap her nephew Ted was standing over her with many knives around her body and he stood there with a complacent look on his face (Sullivan, 2009).

Ted would go on to graduate from highschool and attend college at Washington State, where he would meet the woman that is rumored to be the cause of his killing rampage, her name is Stephanie Brooks. They dated for about a year, but as their relationship progressed Ted’s Personality and sexual inadequacies got in the way of their relationship blossoming (Aynesworth, 2000).

It was not long after his break up with Stephanie Brooks that young women were starting to disappear from campuses around Washington State. When some of the bodies were found they were brutally beaten about the head, strangled, raped and torchered. Some were missing their heads completely. Bundy’s victims ranged from the age of 18 to 24, they all had dark hair and a part down the middle(Sullivan, 2009). Ted’ s reign of terror lasted over a four year period from 1974 to 1978, he killed over a span of six states (Washington, Utah, Colorado, Florida, Idaho and Oregon). He had a total of 36 victims, there was speculation there might have been more and Ted himself had hinted there was, but that was never proven (Sullivan, 2009).

When Ted was caught people were labeling him as a psychopath. The definition of a psychopath is a person who is impulsive, grandiose, callous and has not empathy what so ever, and that definition fir Ted perfectly. He was very grandiose, whe he decided to defend himself at trial instead of having a lawyer. He never showed empathy for his victims , even when he was denying his part in their deaths, and his callousness toward his victims, was proven when the bodies were found they were so brutally murdered (Harenski, 2010)

Now this paper will touch base on some of the situational factors that may have played a part in him becoming the man he was, and what signs were evident in his early years that probably could have prevented his outcome.

Ted at a very young age was not really given much affection. His mother was not the comforting type. He was not able to develop that bond that a child has with a parent because a good part of his life he thought his mother was his sister, so that’s the way he interacted with her (Sullivan, 2009).

According to the attachment theory, when a child is born they are suppose form attachments with their parents. They depend on their parents for love and affection they also depend on them to teach them how to love and feel empathy for others, but if a child never receives that affection, they will have a difficult time interacting with others outside their comfort zone (pearce, 2010).

Bundy had a negative attachment representation which could have contributed to his personality defecencies, he mostly likely had what is called a maladaptive perception of others (pearce, 2010). Research has shown that a child who has negative attachment representation they develop certain dynamics in their personality which may include lack of empathy, habitual mistrust, superficial charm and avoidance of engagement or intimacy. They can also be controlling, demanding very manipulative, charming and deceitful. All the characteristics that have been associated with Ted Bundy, he said to be very charming, manipulative and he lacked empathy for his crimes (pearce, 2010).

Some developmental factors that probably contributed to Ted Bundy’s personality disorder, he witnessed his grandfather be violent and abusive towards the women in the household, but he always considered his grandfather to be and up standing individual, he does not remember his grandfather in that manner, but everyone else does. Also his grandfather who was known to have an obsession with pornography, which is a problem Ted claimed is part of his reasons for doing the things he did. (Aynesworth, 2000) Ted growing up was left to his own devices his mother was not much of a mother figure, like I said earlier he had detachment from his parents, so his development was compromised he really was not shown how to be, he was not told that if you do something wrong there is consequences for your actions, as a child he shoplifted and was suspected of robberies in his area he was questioned but he was never charged.(Sullivan, 2009)

Even though Bundy’s mother was not very active in his life, his stepfather Johnny Bundy had different form of parenting style, he was more of a authoritarian, he demanded respect and he physically punished Ted if he felt he was being disrespected. Authoritarian parents tend to be very strict and and children are expected to be obedient and they are not to question their parents authority, and on occasion Johnny and Ted had verbal arguments that became physical with Johnny hitting Ted, and his mother usually was the mediator.(Sullivan, 2009) The problem with this form of authoritarian way of parenting is the child does not get a chance to express oneself, so he or she has all this latent aggression that is waiting to be let loose, so for Bundy he was never allowed to express his anger freely in order to let some of that aggression go.(Bartol, 2008)

Ted Bundy at a very young age could have been diagnosed with a conduct disorder, because he was stealing at a young age, and he was just being a juvenile delinquent, but he was not treated for this so that also could have been a contributing factor, because at an early age he was exhibiting antisocial behavior.(Bartol, 2008)

He was going against societies norms at an early age, and he was exhibiting very disturbing behavior at the of 3 which should have been treated but it was ignored, a main issue with that might have been the era he was in , being born in the 40’s people were not as knowledgeable about disorders or tolerable if someone was diagnosed with one.

In conclusion Ted Bundy was one of the worst serial killers of our time, he was brutal in his killings, and he took the lives of over 36 women that we know of, he lived his life in the spot light he had many friends, people considered him charming and intelligent, he was a big figure in politics in the 70’s. He graduated with a degree in Psychology and went on to study law, but never finished. The ironic thing is he acquired a degree in psychology and he himself had psychological problems. (Aynesworth, 2000)

He was a psychopath, he had no remorse no sympathy for his victims, he never referred to his victims as if they were people, in his interviews with Aynesworth and Hugh, he never referred to himself as the killer he always talked about the crime as if he was an outsider. Up until his execution is when he eventually started to acknowledge his crimes, he finally started to admit and confess to his transgressions, he even tried to use the knowledge he had of where the bodies were buried of the victims the police never found, but to his surprise the families of the victims wanted him to be executed more than they wanted to find their loved ones. (Aynesworth, 2000) 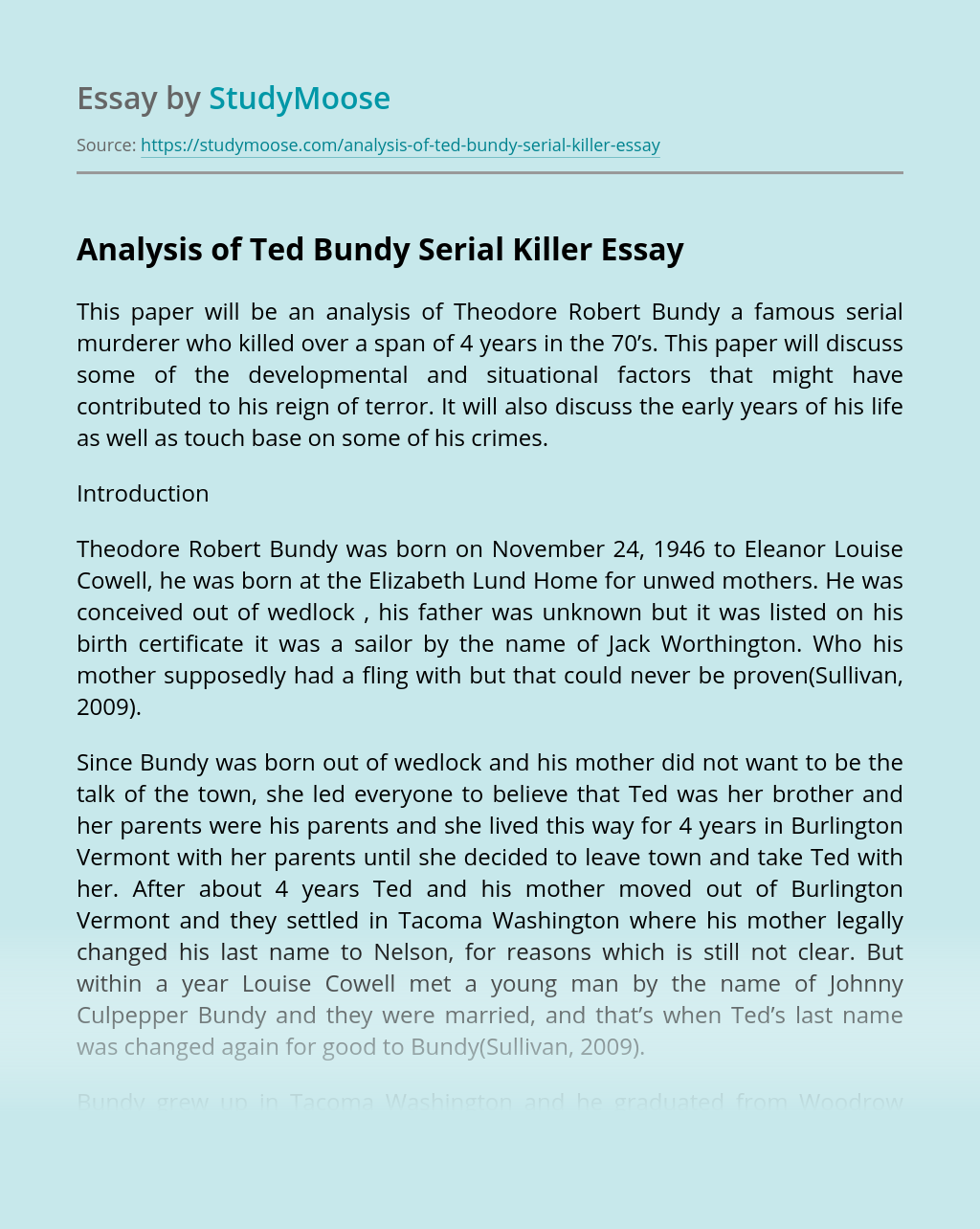