Secret is an amazing movie to look at and to listen to.

Don't use plagiarized sources.
Get Your Custom Essay on Movie Review of Secret (2007 Taiwanese Film) Just from $13,9/Page

The film tells a “simple but very beautiful” love story which is tied between past and present. The story, the music, the talent – you’ll really be amazed and be in love with it when you see it yourself. You can’t imagine that it would be magical. It’s a unique story, unpredictable and interesting. What’s more interesting is there is more to it than what meets the eye.

Careful attention must be paid to all scenes, or else the story won’t click and the end won’t be as good. Here’s the spoil. Ye Xianglun is a budding musical genius whose way with piano keys makes him a hit with the ladies, and even the guys, who recognize talent when they see it. Ye arrives at Tanjiang Art School and already he’s being watched, but his eyes and heart are immediately stolen by Lu Xiaoyu, an elegant, charming flirt who first happens upon Ye in the school’s aged piano room. The two begin a cute, casual romance that’s defined by secrets.

Basically, Lu keeps them, starting with her name, then extending them to other things like where she goes, what she does, and why she’s always absent from class. Since she’s so effervescent and attractive, Ye is immediately smitten. Ye has a secret too, but I’ll give it away: his dad is a teacher at the school, and he’s played by Anthony Wong in an amusing performance that’s vintage Wong. Ye also has some friends at school who aren’t as amusing, and even qualify as annoying and bothersome. Some of these characters are played by Chou’s Taiwanese pop music pals. Since this is a Jay Chou (Ye Xianglun) production (besides starring and directing, he penned the original story and contributed the music), it’s only understandable that Chou make room for some of his buddies as well as his pet obsessions, especially music. Ye becomes the class celebrity when he kicks ass in a “piano battle”, which is as entertaining as it is patently manufactured. Basically, Ye outfoxes his opponent on the ivory keys, winning the hearts of the girls and the guys, while still remaining cool and sheepish in that inimitable Ye Xianglun way.

Chief among his admirers is the pretty Qing Yi, who starts to crush on Ye big time. But Ye only has eyes for Lu. Or does he? Despite getting along swimmingly with Ye, Lu soon gets the idea that Ye is two-timing her with Qing. This is due to your standard crossed wires and mistaken circumstances, but the misinterpreted event is enough to throw a massive crush-killing wrench into their puppy love. That would probably be a terrible thing to behold if not for the fact that the relationship up until then was hardly inspiring. Ye Xianglun and Lu Xiaoyu have decent chemistry, but the relationship between their characters never seems that deep. There’s a manufactured quality to the dialogue that makes their supposed love a bit unconvincing, and without more acute emotions the film begins to drag. Sadly, part of this is the fault of Ye Xianglun, the actor. Ye possesses a certain likable charm, but his presence hardly screams “passion.” His demeanor is just too remote; Ye tries hard, but he can’t convey a complete range of emotions. Shoring things up, however, is Lu Xiaoyu.

When she initially appears, she acts too much like an idealized good girl flirt to be real; it’s like she’s some manufactured idea of what perfect high school romance should be. However, as it turns out, there’s a reason for her bizarre flirtatious behavior, and as the film divulges more of the how’s and why’s, Lu is given a chance to convey emotions that prove heartbreaking. Her screen presence is refreshing and her emotion’s genuinely moving; if Secret manages to affect, Lu Xiaoyu is a large reason why. The revelation of the film’s eponymous secret is what gives Lu the chance to really affect the audience – and yet it’s also when the movie starts to lose its credibility. The mechanism behind the film’s secret is never known, but the logic of how it works is explained explicitly, such that every incident and action in the film needs to fit a set of rules explained by the characters and depicted by the events themselves. But the film ultimately doesn’t adhere to its convictions, eventually twisting events to fit desired emotions and skirting around the rules that they’ve laid out for us.

The film gives us a denouement, but it’s only touching because it fits some sort of predetermined audience expectation, and not because it surprises or really affects. Some people may be happy with how Secret ends. But does the film earn its ending? I don’t think that it does. At least Secret is a very pretty ride. On artifice alone, the film is aces, serving up beautiful art direction, cinematography and music. Ye Xianglun (Jay Chou) really knows how to compose a tune; the film’s original music is genuinely stirring, and preexisting pieces are well-chosen and evocative of the film’s innocent romantic mood. Secret serves the senses exceptionally well – so much so, that it’s almost tragic when it ultimately throws logic out the window. Ye Xianglun and company have created a nice little valentine, but their desire to give the film more weight eventually leaves it adrift.

The film barrels towards its intended goal with little regard for common sense, leaving the audience with nothing besides the pretty pictures and people to shore it up. Amazingly, that gambit is more successful than not, and Lu Xiaoyu (Kwai Lun-mei) practically drags the film across the finish line herself. Without her the film would probably sink beneath its own self-importance, as its manufactured sheen and occasionally miscalculated choices render the film little more than a superficially gorgeous pure love diversion for teen girls and the boys they drag to the cinema along with them.

That’ll probably do just fine for most, since “manufactured diversion” seems to be a standard expectation for many modern moviegoers. Secret will probably score well with its intended teen audience, especially if they take in the film as a single, one-off experience. Further viewings would only reveal the film’s holes to be gaping and perhaps intolerable, but upon first glance, Secret is pretty and polished enough to charm. You should watch it too! 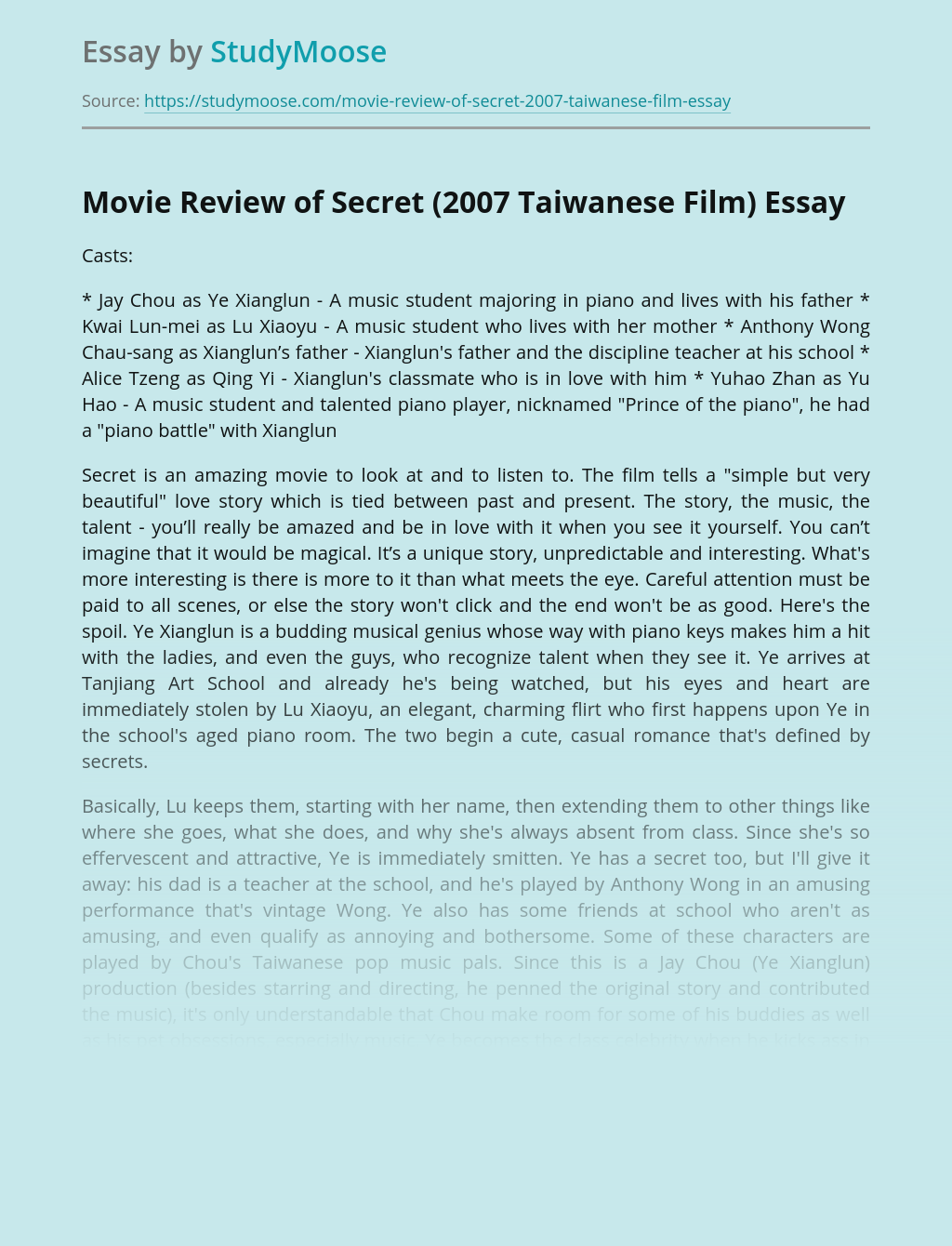 Are Professional Athletes and Actors Overpaid

In this essay I will explore a much debated topic in this country pertaining to the undeniable fact that professional actors and athletes overwhelmingly get paid much higher than the average American. As any highly debated topic, there are always arguments and viewpoints from both sides of the spectrum. Like many Americans, for entertainment I...

Get Essay
The Gods Must Be Crazy

The Gods Must Be Crazy 1 is a South African comedy film which tells the story of Xi, a Bushman from the deep Kalahari Desert. He lived happily with his family and tribe because he thought the god provided them with plenty of things. The film contains various elements about cultural differences and intercultural communication...

Compare and Contrast: Cinema or Movies at Home

The average American spends about $2,000 a year on entertainment. Many people can conclude that watching a movie in a cinema is very memorable and interesting. Although a cinema doesn’t compare to the privileges you have at home. Then again your home cannot provide you with a huge screen and a big volume. Being at...

Compare and contrast the opening scenes of Polanski’s 1971 film variation of ‘Macbeth’ with Geoffrey Wright’s 2007 adaptation. Roman Polanski’s and Geoffrey Wright’s adaptations of Shakespeare’s Macbeth are recorded in different designs in spite of being based upon the very same play. This may be to suit a various audience or convey a various message...