The Use of Foreshadowing in A Rose for Emily

“A Rose for Emily”, William Faulkner’s most widely anthologized short story has been analyzed and debated over the possible meanings for many years. The story is told by a narrator who leads the reader through a maze of chronology meant to confuse the reader with the years and give hints of what is to come with use of foreshadowing. The focus is on Miss Emily’s bizarre affair and how it affronts the chivalric notion of the old south (Burduck).

The author reveals Miss Emily was repressed by her father and made to stand by his side as he denied all would be suitors. When she finally meets Homer Barron she becomes even more the subject of gossip by the townspeople for her disgraceful affair in the small white community. As the affair unfolds there are hints of homosexuality in Homer Barron leading the reader to wonder how this will end as the narrator spins the story to a different time.

The symbolism is strong throughout the written story, beginning with Miss Emily herself as the reader sees her refuse “to submit to, or to concede, the inevitability of change” (Skinner). The narrator is thought by some to exact a measure of revenge by telling the tale and attempting to relieve the grief produced by Homer Barron’s rejection of Miss Emily, making the narrator himself, the protagonist in the story (Dilworth). The most interesting part of the story is in the end when Homer Barron’s murder and Miss Emily’s necrophilia are discovered.

Unfortunately, the feeling of surprise, revulsion, and that “ah-ha! I knew it all along!” one gets reading the story is not carried into the movie. It is only in the written version of the story that the mixed chronology allows for the strong use of foreshadowing to give clues of the murder of Homer Barron.

The climax of the story comes with the discovery of Homer’s corpse in the upstairs. The death was first introduced in the beginning of the story with “the smell” shortly after Miss Emily’s would be suitor “deserted her”. The first foreshadowing showed up here as it was mentioned immediately after Homer Barron’s desertion that Miss Emily’s attitude changed: “After her father’s death she went out very little; after her sweetheart went away, people hardly ever saw her at all” (Faulkner, 85). This indicates something more sinister than a simple death. The townspeople immediately began to talk about the smell and there were several clues that the townspeople chose to ignore with a smell so putrid. The reader notes how the narrator “implies his own and his society’s cultural values, which influence attitudes and behavior toward Emily in a way that implicates him and the townspeople in her fate” (Dilworth). The women were not surprised when the smell developed: “Just as if a man — any man — could keep a kitchen properly”. And then the men said: “It’s probably just a snake or rat that nigger of hers killed in the yard” (Faulkner, 85). This leads us to believe that the townspeople knew immediately of the death of Homer Barron and were accessories after the fact.

The use of foreshadowing was once again apparent because with the gossip of the small town it was impossible the townspeople did not know of the Arsenic purchase. “I want the best you have. I don’t care what kind it is” and the druggist says, “They’ll kill anything up to an elephant“(Faulkner, 87). With one look at the skull and crossbones “for rats” written underneath, we are led to believe once again the druggist knew the intent: “The negro boy brought her the package; the druggist didn’t come back” (87). This indicates he may have know all along about the intent of the poison.

The very next day it was discovered that Homer had left her and she had coincidentally bought the poison. The townspeople said, “She will kill herself”, but in the beginning when she had first begun seeing Homer Barron they had said, “She will persuade him yet”. I noted then that Homer had himself mentioned he “liked men”. At that point I began to ponder his sexual proclivity and became suspicious as I continued to read this story about how the townspeople believing Miss Emily to be of such high standards had formed the opinion she had lowered herself to the level of this man. It was here that the narrator supplied the motive for the death of Homer Barron. The townspeople tried to appeal to Miss Emily’s values when they sent in the Baptist minister. The arrival of the cousins, who were even “more Grierson than Miss Emily had ever been, was further use of foreshadowing given the purchase of both the arsenic and the wedding set in the same time period. There would have been no possible way the cousins had not heard of Homer’s interesting relationships with young men when the townspeople had reached out to them to ask them to come in the first place. When Homer Barron reentered the house through the back door, in the night, never to be seen again, it was apparent to the reader what the aforementioned smell was.

In comparison, the movie failed miserably to convey the mystery or foreshadowing as it was filmed in chronological order. By filming the story in chronological order the plot of the story is completely missed. The personality of Homer Barron, the fact that he was not the marrying kind, and his sexual proclivity was completely absent; the performance of Angelica Huston was rather bland. Without the feeling we got from the written history, the movie fell flat. The way the written story jumped around in history gave some insight as to the formality of Emily Grierson’s strict southern upbringing and how she became mysterious and only a little psychotic; she mainly appeared to be very private and strict to her upbringing by her overbearing father. In the movie we are able to view what was happening to Emily after her father died; he had choked at the dinner table; that felt out of place.

Only in the written version did the townspeople know her to be completely out of money and the house to be falling into disrepair while standing solitarily on a busy street with industry coming up around it. This symbolism gave Emily more personality when written in the original story. She grieved after her father died and the reader was shown this as she chopped her hair short. Again, when she became older we read she had became fat and her had hair turned grey, allowing us to see the passing of time. In the written story there were many clues as to what was to come of Homer Barron by use of foreshadowing, none of which were able to be felt in the movie. The only scene in the movie that was a fair representation of what is written in the story can be seen in the end as the corpse of Homer Barron is discovered in the locked upstairs bedroom and the lock of long grey hair is found next to it.The necrophilia did come as a surprise in the written story but in the movie came across as just bizarre.

In summary, the written version of the story was very interesting and its lack of chronological order added to the use of foreshadowing and created mystery where the movie was rather bland and lost the majority of the story line; leaving me feeling disappointed.

The Use of Foreshadowing in A Rose for Emily. (2016, Oct 24). Retrieved from http://studymoose.com/the-use-of-foreshadowing-in-a-rose-for-emily-essay 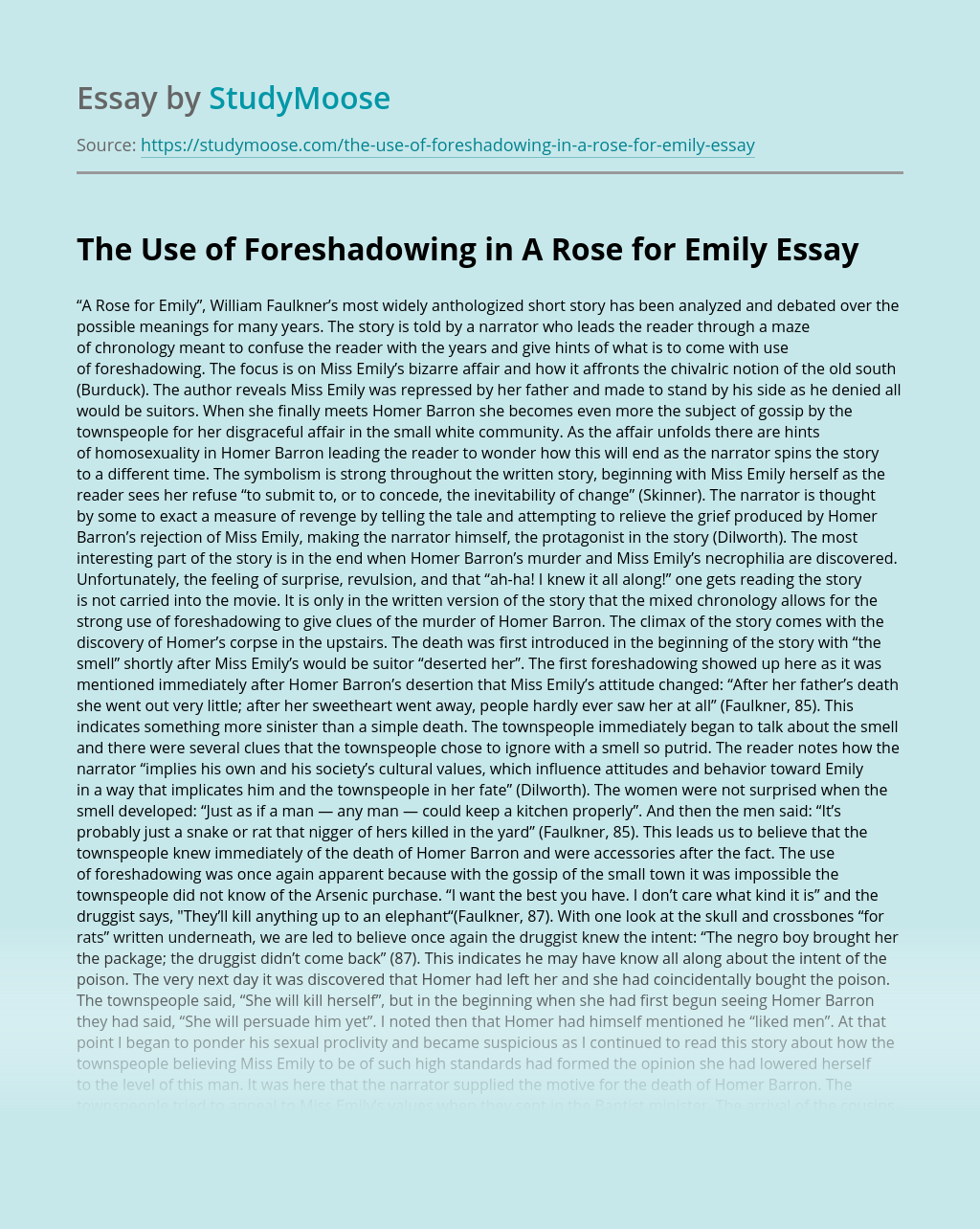 Don’t waste time
Get a verified writer to help you with The Use of Foreshadowing in A Rose for Emily
Hire verified writer
$35.80 for a 2-page paper
Stay Safe, Stay Original