The cask of Amontillado narrative essay

It was a cold October night when I first heard of Fortunato’s case, I was very amused at the thought of someone doing something so unhuman to a person. I guess some people can’t control their actions, but then again those people belong in a mental institution. This case in particular was very peculiar because it had gone five years without being solved. It was about a week ago when our department heard about this case, it wasn’t long before the case landed on my hands.

Don't use plagiarized sources. Get your custom essay on
“ The cask of Amontillado narrative essay ”
Get custom paper
NEW! smart matching with writer

I am after all the best detective in this state something to be proud of course.

Going out to the other side of the world to solve a case was something I had never done before but this case was overdue and someone had to do something to the aggressor in order to obtain justice. Italy, a beautiful place if you ask me, the streets full of antique buildings and tons of traditions everywhere, something that is not easy to find.

On my way to Venice I noticed that there weren’t as many people, the buildings looked abandoned and strange, and the people scurried around as if there was a secret buried amongst them. As I got of the cab I started to look around for clues or for some type of authority that could inform me about the whole case when suddenly someone spoke behind me “Why can’t you people understand that we don’t know anything about what happened to Mr.

his voice cold and full of exasperation. “I… I’m sorry? but–” I was about to explain myself when he cut me off, “You northerners are not welcomed here, all you do is disturb us and we’ve had enough.” And just like that he walked off into the distance. It was extremely clear that I was not welcomed but I had to do my job so I continued to look for some type of authority. When I finally found one he seemed to know exactly who I was and my reasons for being there. “Let me guess, you northerners are at it again aren’t you?” I looked at him as if I had no idea what he was talking about “Excuse me?” he chuckled then continued, “you know, it’s been five years and last I heard there was no sign of the murderer anywhere.” “I’ll find him.” I said, he laughed in a jocular way. “Well good luck son, if there is anything you need you can always find me down at the police station. By the way my name is Derick.” “Nice to meet you Derick, I–”

“Yeah, yeah, yeah, go along now do whatever you have you guys do.” The first week served a purpose of letting me know my way around tow. I had already asked around a bit about the whole case, didn’t get many answers just insults and a couple of I don’t knows. Useless information. There was this old lady in particular who unlike the rest of the town seemed very nice, she told me about her granddaughter who had previously worked at Mr. Fortunato’s house as a maid. The next day I headed over to the police station as soon as I woke up, I asked if he could call in Irma, the lady’s daughter. “I don’t know what you are going to get out of it but why not?

The sooner this is over, the sooner you’ll leave.” I didn’t say anything just thanked him and left. About two days later I received a call from Derick saying that Irma was in the interrogation room. When I walked in the room I noticed that she was very young, 27 years old maybe. She was tall and slim with a beautiful complexion, her face full of exasperation.

“Do you know why you’re here?” I asked. “How could I not?” she replied rudely. “Look” I told her. “I know you’re sick and tired of strangers bothering you with this subject, but I promise that of you tell me everything you know and I find out who murdered Fortunato, I will leave and none of us will ever bother you again.” She looked at me, her face once again full of exasperation. “All you need to do is be honest and tell me all you know” I reminded her. “I don’t know why you people come to me for information, I was just a maid at Mr. Fortunato’s house, I don’t know much.”

“I understand, but you have to realize that every little piece of information you give us can be very valuable.” It was hard for me to get her to cooperate but she finally started speaking. “There isn’t much to say, one day Mr. Fortunato decided to give us the day off for the Mardi Gras festival, we found it very strange since he never gave us days off but we ignored it and enjoyed the festival.

After that I never saw Mr. Fortunato again.” “Do you know if Mr. Fortunato had any enemies?” I asked. “Not that I know of…” she stopped and hesitated. “Go on” I encouraged her, “Mr. Fortunato hated Luchesi but I never heard of Luchesi having problems with Mr. Fortunato?” she paused then continued. “Maybe Montresor can help you out with that, her used to work for Mr. Fortunato as well.” “Okay, well thank you so much… uh?” “Irma” she said with half a smile “well thank so much Irma, I will try not to bother you no more.” I walked her over to the door and watched her disappear into village.

The cask of Amontillado narrative essay. (2016, May 29). Retrieved from https://studymoose.com/the-cask-of-amontillado-narrative-essay 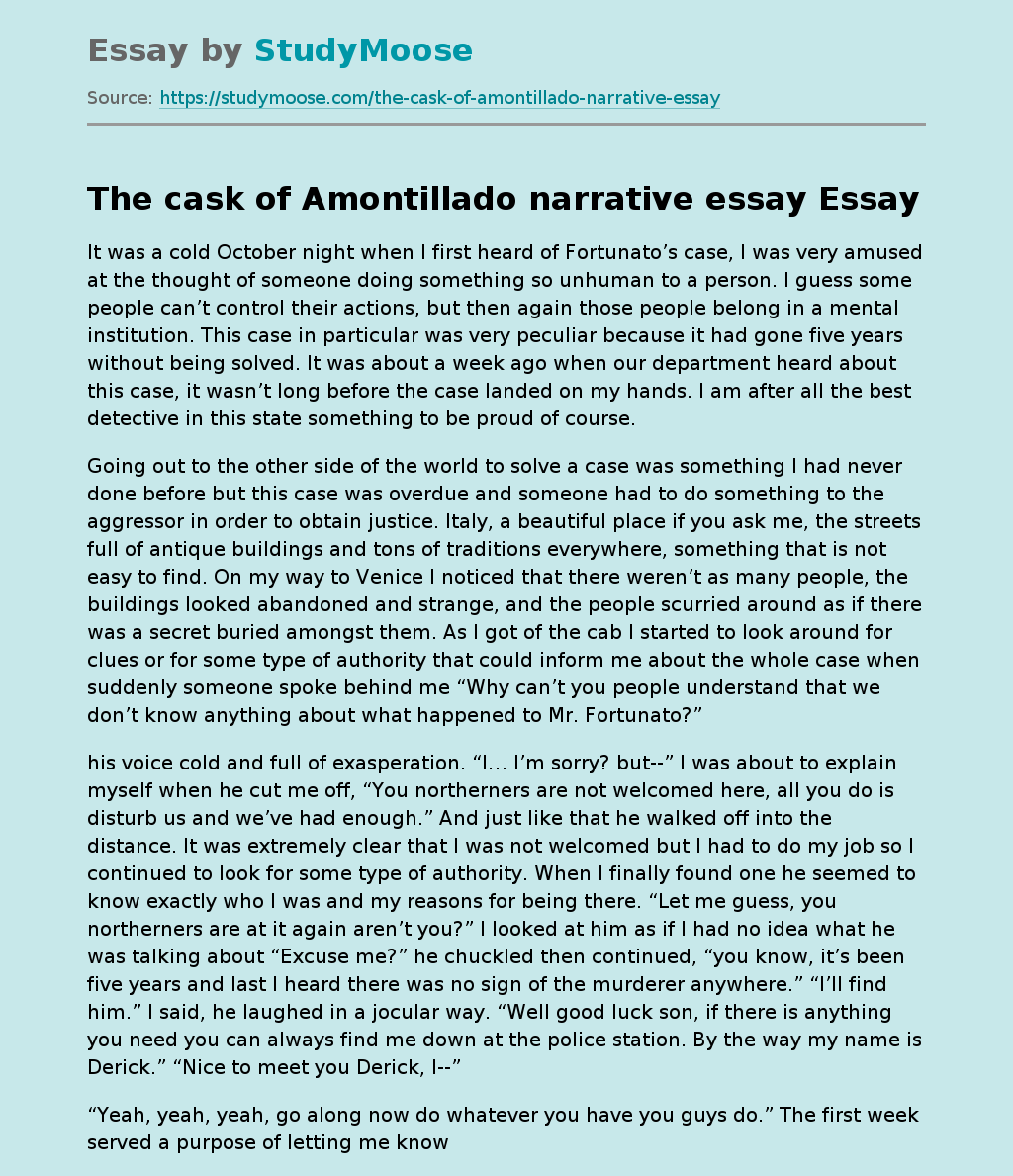