Some particular adherents of various religious faiths will often argue that superstitious belief and religion are fundamentally different types of beliefs. But how do these two differ and how does one affect the other? The Roman Catholic Church has been considered the largest Christian church in the world, having more than a billion members. The church is usually what associates with the word “faith” and so the believers range from the Apostles of Jesus Christ, the founder of the church, to the bishops, priests and all individuals who consider themselves followers of Jesus up to the present time.

Don't use plagiarized sources. Get your custom essay on
“ Superstitious Beliefs ”
Get custom paper
NEW! smart matching with writer

In Asia, the 83% Catholic population of the Philippines makes the country the major Catholic country of the continent. However, the country is not only where Catholicism dominates but also a place where infinite numbers of superstitions beliefs can be found. The country’s superstition and beliefs have continuously increased in volume throughout its different regions and provinces.

These are believed to have come from different saying and superstitions of the Filipinos’ ancestors aiming to prevent danger or to make someone refrain from doing something in specific.

These beliefs have already been part of the people’s culture and the influences dictated by their customs and traditions. The Filipinos’ beliefs in supernatural beings and other types of superstitions are implanted in someone’s way of living that starts during the pregnancy of a woman, the giving of birth, wedding and until his or her death. In the study “Pregnancy And Superstitions: A Study On Filipino Beliefs And Practices On Pregnancy,” the researcher implies that advices coming from the elderly and those who experienced it are most often than not considered to be superstitious but it still remain to be very influential to those who are pregnant.

Although Asians have been famous for their superstitious beliefs and practices and the passing of traditional beliefs from generation to generation, the Philippines has considerably maintained and passed on a lot of customary beliefs that are being practiced by their ancestors.

Hence, it is considered that these practices as based on religious beliefs, opinions, and/or real-life experiences of those who share it. They also portray how people view the unknown and its means to appease the gods who controls the future. In historical context, the word superstition is often used pejoratively to refer to folk beliefs deemed irrational and this usually leads to some superstitions being called “old wives tales.” Further, it is also often applied to beliefs and practices surrounding luck, prophecy and spiritual beings, specifically the irrational belief that future events can be influenced or foretold by specific unrelated prior events. Now, Catholicism comes on the way and in most ways that superstition has been given the wrap up, it conflicts how the Catholic faith is supposed to be practiced.

The second commandment of the Catholic faith implies: “You shall have no other gods before me.” But most of the superstitions practiced by these people involve in believing the existence of supernatural beings such as dwarves, black hairy giants, malevolent creature, witches, and enchanted ones. Stories about these creatures are usually narrated to children by their parents or grandparents especially at night. So, while going to church every Sunday and all days they consider obligations to praise God, some of these people are at the same time, believe that besides Jesus Christ, there are those mentioned creatures living around them. So how do their faith being distracted? Do these creatures create conflicts against what these people believe in church and their preachers are telling them? Real faith always has a good, sound, reasonable basis.

It is simply an established confidence. So when it is said that superstition, unlike faith, has no substantial basis; nor are its conclusions reached by logical deductions, then there should be a choice to make than living with both beliefs. In the eyes of the faithful lies the true concept of faith. When there are doubts, then someone cannot really say there is faith because confusions are vivid. Someone who embraces Catholicism cannot say he is a strong believer when at the same time he believes in superstitions as superstitions as being defined, do not have substantial basis and often conflict with the definition of real faith in the church. As considered the major Catholic country in Asia and at the same time has plenty of superstitions, Philippines situates itself in the subject of further delving to make things more clarified about its people religiosity and superstitions. 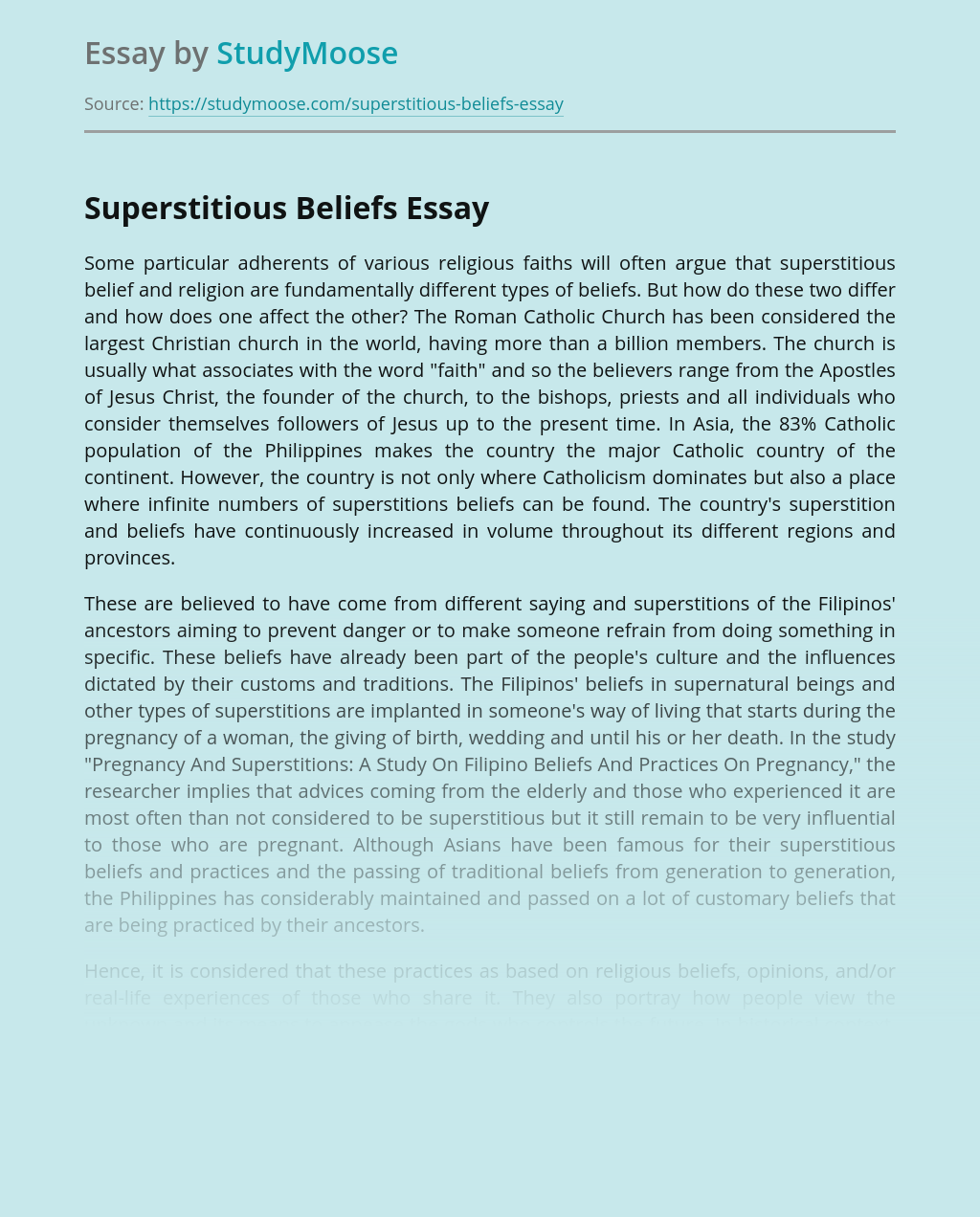