Faith in "Life of Pi"

How deep is your faith? How strong is your will to survive if the tables were turned and misfortune rocked your boat of life? Throughout the entire novel Life of Pi by Yann Martel, the protagonist Piscine Molitor Patel develops an extreme devotion to God. As the story progresses Pi’s faith becomes stronger, allowing him to continue living a peaceful life even when things get nearly impossible. Religion keeps Pi busy, happy and most importantly… alive. He develops a profound faith in God’s of 3 different religions (Hinduism, Islam and Christianity), which is put to the test when he spends 227 days stranded on a lifeboat in the Pacific Ocean.

Don't use plagiarized sources. Get your custom essay on
“ Faith in “Life of Pi” ”
Get custom paper
NEW! smart matching with writer

During those 227 days Pi as a character grows immensely and his beliefs are truly put to the test.

Eventually the theme of faith leads to the biggest question in the novel after Pi tells two completely different stories of his survival to the Japanese insurance investigators. Which is the better story? Faith is believing what you want to believe, yet cannot prove.

Sadly, many people live with this definition of faith. For some it feels liberating. It means being able to believe in anything; no explanation is required or given; it is just a matter of faith. For others, such a definition is sickening. This definition states as faith increases, reason and meaning eventually disappear. Nothing can be proved, so in other words living in faith is living in the dark.

“Religion will save us,” I said. Since when I could remember, religions had always been close to my heart.

“Religion?” Mr. Kumar grinned broadly. “I don’t believe in religion. Religion is darkness.”Darkness?” I was puzzled. I thought, Darkness is the last thing that religion is. Religion is light” Pi completely contradicts the statement ‘faith is living in the dark.’ Faith is not meant to be interpreted in such a way, which is something Pi realizes during the earliest stages of the novel. Pi chooses to believe what he would like to believe, even if it meant taking several concepts from 3 completely different religions and combining them to create a Utopian religion in a sense.

As a child, Pi begins to read a great amount and starts embracing more than just one religion. He notices that their powerful narratives have the ability to provide meaning and dimension to life, which is where Pi’s interest and faith in multiple religions truly begin to develop. In Pondicherry, his atheist biology teacher Mr. Kumar challenges his Hindu faith in God, this makes Pi realize the positive power of belief and the need to overcome the harshness of the universe. Piscine then becomes incredibly motivated to learn more and begins practicing Christianity and Islam, realizing these religions all share the same foundation: belief in a loving higher power.

Practicing three different religions gave Pi the flexibility to choose the good and convenient aspects from each. This allowed him to practice a utopian religion where his curiosity could be satisfied, so Pi became very dedicated to each religion. He went to worship at the local mosque, mandir and church but chose to hide all of this from his parents. Pi’s faith and belief in God inspires him as a child, keeps him motivated and constantly thinking but most importantly, helps sustain him while at sea.

While Pi is in middle the ocean on the lifeboat after the sinking of the TsimTsum, he turns to faith and religion to keep busy and give himself hope. Throughout the novel we see that faith and religion is something Pi turns to in order to keep himself occupied, especially during his 227 days at sea. On that stormy night, cruising on a ship in the middle of the ocean, Pi lost everything, everything that meant something to him, his family, his protection, the feeling of safety and love. In other words, everything that could give him a hint of hope had disappeared in a matter of seconds. In exchange for all of that he was left stranded on a life boat in the Pacific Ocean surrounded with fierce zoo animals.

Even though he had no way of being sure that he would be saved, he still pushed himself to believing that somehow he will be able to overcome the crises that he had fallen in. He prayed to God even though he had no proof He was there but he believed that God really was listening. He believed because he had no other choice. In a situation such as this one, Pi needed a miracle. On the lifeboat, prayer becomes a daily routine for the cast away. Each day Pi wakes up, prays, feeds Richard Parker and inspects the raft and lifeboat, which helps him maintain his mental sanity by keeping busy.

His religious rituals allow him to feel a sense of calmness and give him the will to go on. “They brought me comfort, that is certain. But it was hard, oh, it was hard. Faith in God is an opening up, a letting go, a deep trust, a free act of love- but sometimes it was so hard to love.” (page 231) Pi admits that it was hard to put his trust in God when it seemed like He wasn’t listening, but continues praying, staying faithful and practising his religious rituals throughout the entire 227 days.

On a superficial level, Pi’s faith contributes to his survival by providing daily rituals. On a deeper level, Pi’s faith contributes to his survival through answered prayers. Several times during his experience on the life boat Pi calls to deities during life threatening situations. “My heart stopped and then beat triple speed. I turned. “Jesus, Mary, Muhammad and Vishnu!” I saw a sight that will stay with me for the rest of my days. Richard Parker had risen and emerged. He was not fifteen feet from me. Oh, the size of him! The hyena’s end had come, and mine.’” Here, Pi who is on the point of death.

Richard Parker, a deadly animal, could have easily killed Pi. However, due to Pi’s prayer, he is saved. A rat “appeared out of nowhere” and Pi is able to fling at Richard Parker who accepts the rat as an “offering” and flops back down on the bottom of the lifeboat. Pi’s prayer along with many others had been answered due to the immense amount of faith and dedication Pi shows throughout the novel.

Pi has the faith to go on. Even in the most difficult situations, he realizes that in order to survive or even have the will to survive he must put his trust in God and have faith that things will get better. Pi stays strong and courageous and never has the attitude of defeat, he believes that he will get off the lifeboat eventually. Pi has faith in everything around him, giving him more motivation to continue on with his daily life on the boat.  Throughout the course of this entire novel, Pi’s faith is put to the test. At the beginning of the novel, an older Pi states that he can tell a story that will make the author believe in God, which is true in many ways. Yann Martel creates two stories on Pi’s survival in the Pacific while talking to the Japanese insurance investors. One story involving the zoo animals that was very long, fantastical and elaborate and the other that was incredibly brutal and deals directly with issues such as human brutality and cannibalism. The story with Richard Parker and the zoo animals is told in great depth for 318 pages of the novel, but after the insurance investigators flat out tell Pi “We do not believe your story” Pi recreates another more believable, yet more gruesome story.

In Pi’s second story he retells the first one but using humans instead. He hints that the zebra is the Japanese sailor (innocent and defeated), Pi’s mother is the orang-utan,(motherly and caring) the hyena is the cook (pure example of evil in humans) and Pi is Richard Parker. In his second story, the cook is a pure example of evil in humans, which is something that many choose to believe that such a thing does not exist. The first story Pi tells is a much more powerful, inspiring story but the second is more believable in many ways. So where does God come in? How can this story make someone believe in God? In a way, Richard Parker represents God. At the end of the novel, when Pi has told his long story to two Japanese insurance investigators but they refuse to believe him, Pi tells a shorter, ugly version that is much more believable, but many hate to believe. Then Pi asks the investigators which story they prefer.

Conclusion: During the course of life of Pi, the theme of faith occurs often. Whether it is keeping Pi educated, alive or even kept in the back of people’s minds long after the novel ends. Faith gives Pi the power to go on, even when he feels as if everything is hopeless. So, without Pi’s faith in God that he developed near the beginning he would not have made it through the 227 long, hard days as sea. And whichever story is right, the better story will always be the one with Richard Parker because faith is God and God is faith. 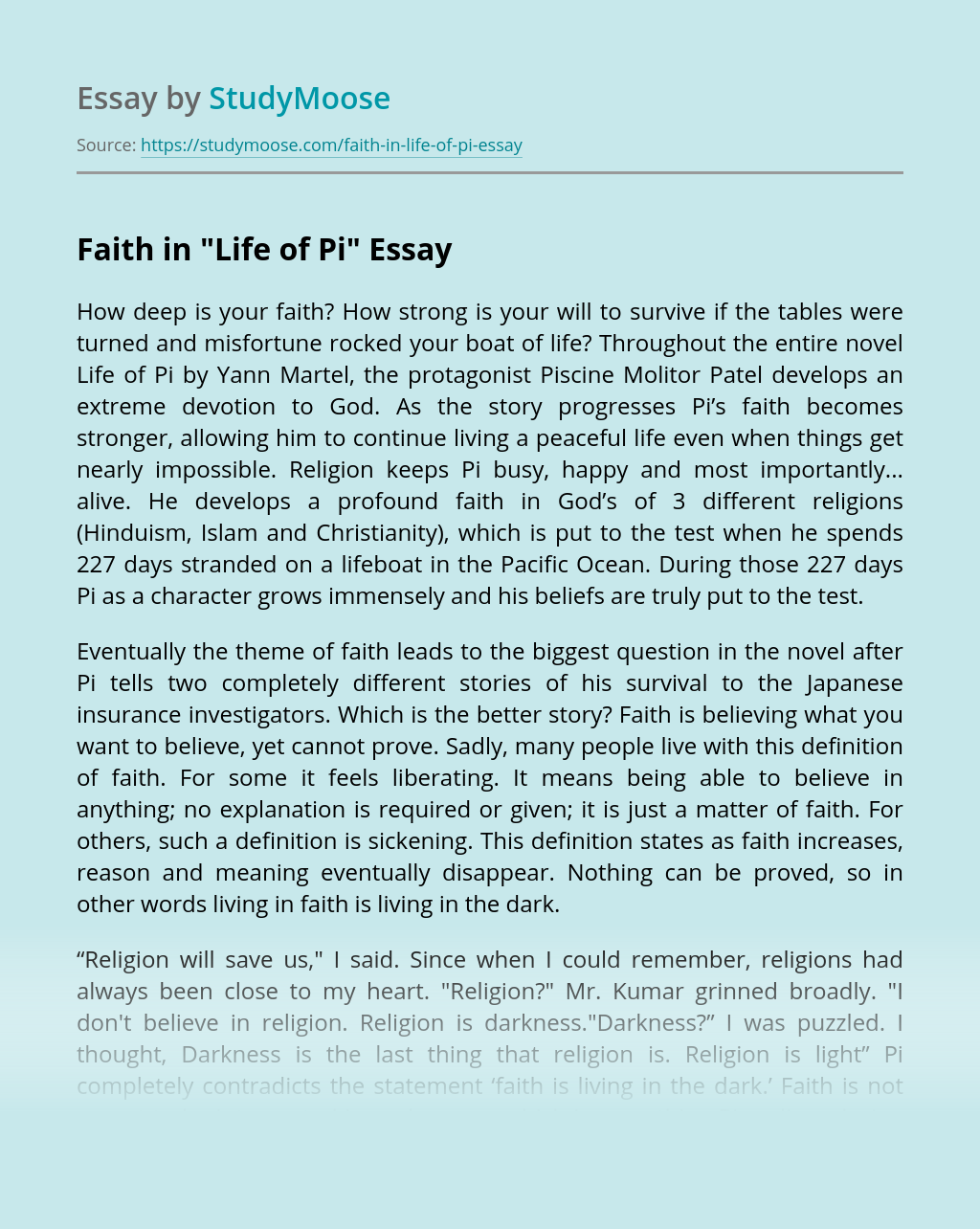