Hypothetical and Scientific Reasoning vs Superstition

In a large measure, science and superstition are polar opposites. Science is based on evidentiary support, objectivity and integrity, whereas superstition has very few of these. This is despite the fact that science originally evolved from superstition and theology, for example astronomy evolved from faith, chemistry from alchemy, etc. These were thought to be superstitions initially and only through a series of hypotheses, research, and argumentations did they become science. In modern society, there are still a lot of unknown, inexplicable phenomena which are misunderstood as superstition and could possibly be puzzles that will be worked out with the development of science.

Don't use plagiarized sources. Get your custom essay on
“ Hypothetical and Scientific Reasoning vs Superstition ”
Get custom paper
NEW! smart matching with writer

Hypothesis is a tentative explanation for an observation, phenomenon, or scientific problem that can be tested by further investigation. The reasoning used to produce a hypothesis is Hypothetical Reasoning. Hypothetical Reasoning is a very important method of Scientific Research. Scientific research analyzes the problem and from that analysis presents scientific facts, which through the process of arrangement and summarization can come to create a scientific hypothesis.

The Scientific Hypothetical Reasoning must follow these four stages. If met with a problem or phenomenon, just formulating a hypothesis and involving psychological and volitional elements is easy to turn to superstition.

For example, one day there was a raven cawing on the roof of a house and later the owner of this house was found dead.

His neighbor who heard the cawing associated his death with the raven, assuming that the raven brought bad luck to the house and thus whoever lived in this house would die. This story is totally superstition. It is an accident, but we can also think of it is a problem and put forward the hypothesis that there is some connection with the cawing of the raven and the homeowner’s death. Even though no one would find any evidence to prove this phenomenon, many people would still believe this superstition. 2) Science VS Superstition

Science and superstition both include hypotheses. However, science is supported through enough evidence. A further requirement is that these evidences must be reproducible and cannot be influenced by someone’s psychological and volitional elements. It is objective and integrated. On the other hand, superstition ignores these criteria. Superstition often uses accidental events as evidence. Comparing the belief that a raven cawing on the roof of someone’s house brings bad luck, some people believe that a magpie will bring good luck because of another accidental event. In the morning, there was a magpie chirping and flying around the yard and later someone brought by some good news.

Because in Chinese the first letter of magpie is “xi,” which means good luck, a hypothesis explaining this phenomenon was a connection between the good news and the magpie. The thing itself is an accidental event but then later joined with and supported by people’s subjective factors. Science is objective whereas superstition is subjective. The scientists try to use enough evidence to avoid subjectivity whereas superstition gives in to the subjectivity. All superstitions exist at least in part to satisfy the need to explain certain emotions and experiences. The chief emotions that give rise to superstitious beliefs are fear and anxiety and they are often reinforced by a disposition to fantasy and mental laziness.

My personal experience of asking help from a woman who can predict the future supports this statement. When the woman told me that something bad would happen in the future, I was terribly afraid of the prediction, and when she told me that the way to avoid the problem was to buy a protective talisman from her, even though the talisman was very expensive I still bought it. In the end, nothing happened, and it was my confusion that this was because of the protection of the talisman. But at that time, I had to believe that because to refuse meant that I would have had to face my fear alone.

In the Mayan prediction of “The End of the World,” even though many people are convinced of its accuracy, because the evidence does not have integrity, or in other words is insufficient to prove its claim, it is still a superstition. In conclusion, when met with some problem, it is important to use the scientific hypothetical reasoning, finding enough complete evidence to prove the hypothesis. The hypothesis must pass the test of practice, and if it does only then should it become a scientific theory. This method is used in order to avoid the fallacy of superstition.

Hypothetical and Scientific Reasoning vs Superstition. (2017, Apr 02). Retrieved from https://studymoose.com/hypothetical-and-scientific-reasoning-vs-superstition-essay 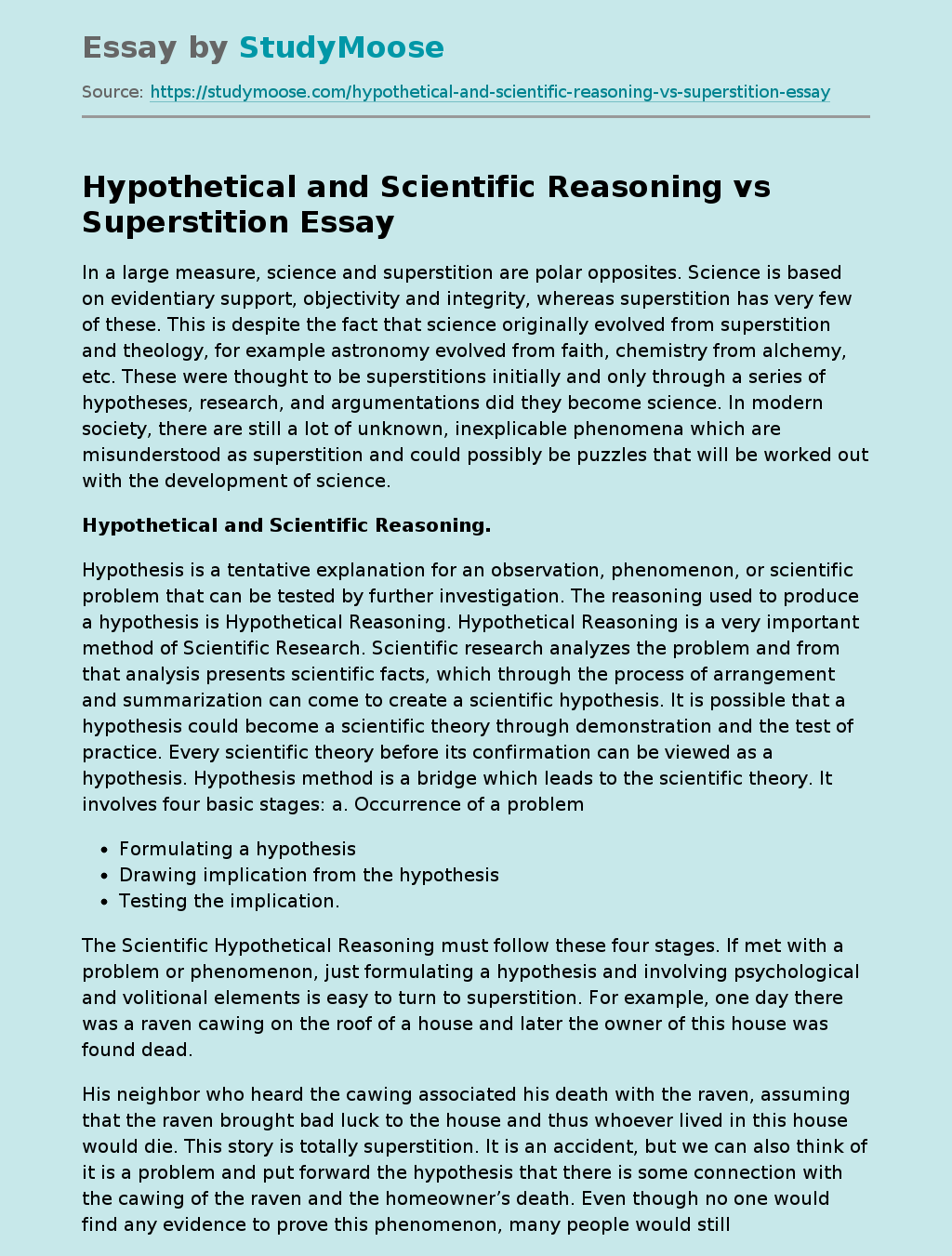