There has always been a big debate on nature verses nurture. It is a debate that is still going on today. Many psychologist and other professions still trying make an agreement for one or the other. I believe that is it both nature and nurture because it cannot be just one overpowering the other. I believe that both nature and nurture intertwine with one another for every human since birth. Psychologists such as Erickson believed that nature determines the sequence of the stages and it sets the limits within which nurture operates.

Don't use plagiarized sources. Get your custom essay on
“ Nature vs nurture ”
Get custom paper
NEW! smart matching with writer

His theories are theories that seem to be more relatable and approachable than the other psychologist who are leaning more to nature or more to nurture. Vygotsky views on cognitive development was Intellectual development can only be understood in terms of a child’s historical and cultural context. Also, Development depends on the sign systems that individuals have available to them.

Vygotsky assumed that adults could convey children through conversations how their culture interpret and respond to the world. He believed that every culture has transmitted physical and cognitive tools that are used in daily lives. He believed that thoughts and languages become more interdependent in the first five years of a child’s life. There are complex mental processes that begin as a social activity and child are able to transform the processes that they use in a social activity in their own internalization of activity. He believed that children can perform more challenging activities when they have someone there to help them who are more competent (Ormrod,2008). Around the same time Vygotsky was doing this making his own theories, there was another man who was from Russia as well named, Piaget, who had his own ideas. Piaget and Vygotsky were similar in some ways but they also had some differences. Piaget assumed that children are active and motivated learners. He feels that children are curious about their surroundings. He assumed that children construct knowledge through experience. He believed that they gained this by the physical and social environment, which is critical for cognitive growth. Piaget had his own stages of cognitive development. The first one is sensorimotor, which occurs from birth until the toddler is two years of age. Sensorimotor is when they start forming object permanence and they have progress from reflexive to goal-oriented behavior. Second, the preoperational stage which is from age two to seven years old. This is when they develop the ability to use symbol to represent an object. Third, is concrete operational from ages seven to eleven years of age. They are thinking more logically in this stage. They are less egocentric. Lastly, it is formal operation which starts at eleven and goes to adulthood. They are able to think abstract and can solve problems through a system of experimenting (Ormrod, 2008). I believe what Piaget and Vygotsky had implanted because when I am talking to little kids, it is easier to talk to them to see how they see things. Having that open communication as an adult, I get a feeling on where they are coming from and try to go from there. They are things that the environment cannot teach a child. I feel there are things that are already innate in them while they were in the womb and after they came out. It is very hard to choose that one conquers the other because they play out equally. Weather it is nature or nurture, it is very important when it comes to human development. It is very clear that they play a big role in everyday life and it will continue to play a role until the day that we pass away. I am a firm believer that both nature and nurture plays a role in life. Everything that Piaget and Vygotsky said is very true. Even other psychologists that are more on the nature side or more on the nurture side, they all bring valid points. 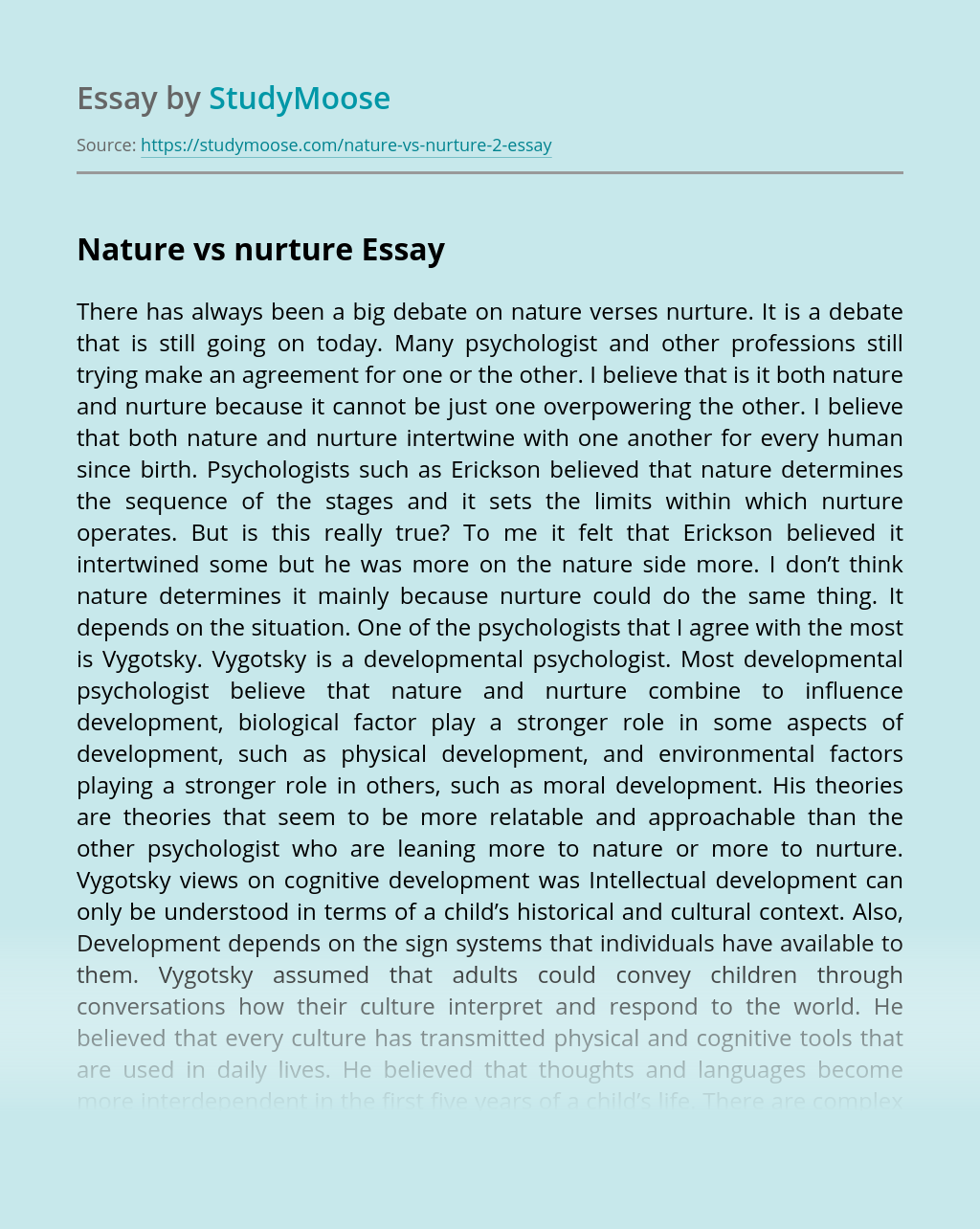