The working memory model is a theory for how short-term memory works, and an expansion of the views expressed in the MSM theory. Baddeley and Hitch in 1974 felt that STM was not just one store but a collection of different stores. These concepts lead them to form a model which consists of three slave systems; the central executive, the phonological loop and the visuo-spatial sketchpad. They used the phrase ‘working memory’ to refer to the division of our memory that we utilize when we are working on an intricate task that requires data to be stored as you go along.

​The central executive is the key component of working memory. It works at delegating our attention to specific tasks, determining at any time how the two other components, the phonological loop and the visuo-spatial sketchpad, should be allocated different tasks. The central executive also has an exceedingly short capacity, so it is not able to deal with too many things in one time.

The phonological loop also has a restricted capacity. It works in conserving auditory information and preserves which order that information came in. In 1986 Baddeley further divided the phonological loop into two separate components; the phonological store and the articulatory process. The phonological store operates as an inner ear, holding the words you hear and the articulatory processor operates like an inner voice, only used for words heard or seen. It then repeats them silently, which is a form of maintenance rehearsal. The visuo-spatial sketchpad is used when you have to plan a spatial task (determining visual relationships between objects).

The working memory model contains a vast amount of strong points, however we don’t know completely everything regarding the working memory model, so there is an opportunity for it to be developed further and intensify our understanding of our shot term memory. The working memory model also creates predictions that are able to be tested empirically, therefore enabling the model to be repeated and be more reliable. Baddeley et al (1975) showed that people are able to recall shorter words better then longer words, which is known as the word length effect, probably because the phonological loop only retains two seconds worth of information. Participants were asked to memorize a list of five monosyllabic words, and one other list made up of five polysyllabic words. Participants recalled the monosyllabic list better than the polysyllabic list, due to the fact that the longer words can’t be rehearsed on the phonological loop because they don’t fit. The discoveries prove that George Miller’s discovery, that the span of the immediate memory is 7 ± 2 is false, because the length of the words matter.

Baddeley’s experiment contains a lack of mundane realism because the participants would not memorize random lists in day to day life containing words with the same syllables. Nevertheless, because it is a lab experiment it can be controlled. This experiment shows a cause and effect, that the longer the words the less the participants can recall. The results of the experiment show that the phonological loop can become over loaded, and has a limited capacity. Shallice and Warrington (1970) conducted research into brain damage by studying KF, who had a STM that could work independently of his LTM and could deal with it realistically well with visual information and meaningful sounds, but some aspects of his immediate memory were impaired and he could not cope well with verbal material.

This research offers evidence for the WMM, as it proposes that only his phonological loop was affected, nothing else. LH, studied by Farah et al (1988), tended to perform better on spatial tasks rather than visual imagery tasks, which also offers evidence for the WMM, as it proposes separate visual and spatial systems. Using brain scans, Bunge et al (2000) showed there was more brain activity when participants in the tests were doing tasks simultaneously rather than one after the other which supports the existence and involvement of the central executive.

Baddeley (1982) conducted research that showed when people process sounds two separate areas of the brain are active which supports the existence of separate components in the phonological system in the WMM Hitch and Baddeley in 1976 demonstrated that when participants performed two STM tasks using the same stores (i.e. both phonological) performance slowed, whereas two tasks using different stores (i.e. visual and phonological tasks) performance was not affected. Participants accomplished both tasks as well as they would have done if doing the tasks separately. This shows that the Working Memory must have separate modalities. The findings also highlighted the difficulties of doing multiple tasks using the same store as oppose to using separate stores simultaneously.

In the Lab experiment, participants were given a statement such as “A is followed by B” while continuously repeating a random word such as ‘the, the, the’, then they were given another statement such as “AB” and asked to say true or false. As this study was a Lab experiment, it was highly controlled resulting in a higher degree of accuracy. The fact that it was a lab experiment also allowed it to be easily repeated, thereby allowing the researcher to retest findings. The Working Memory Model (WMM) is critisised of the central executive being too vague. It appears to be that it allocates resources and is essentially the same as attention. Which doesn’t really explain anything scientifically?

The working memory model offers a more detailed explanation of the MSM, which proposed that information flows through several different stores. It describes the short-term memory with a number of components rather than a unitary store. Additionally, the working memory model includes verbal rehearsal as an optional process rather that the only means by which information is kept in immediate memory. It also emphasises process more than the MSM, which emphasised the structure. The working memory model also takes into account of how we do a range of tasks, such as verbal reasoning, problem solving and comprehension. 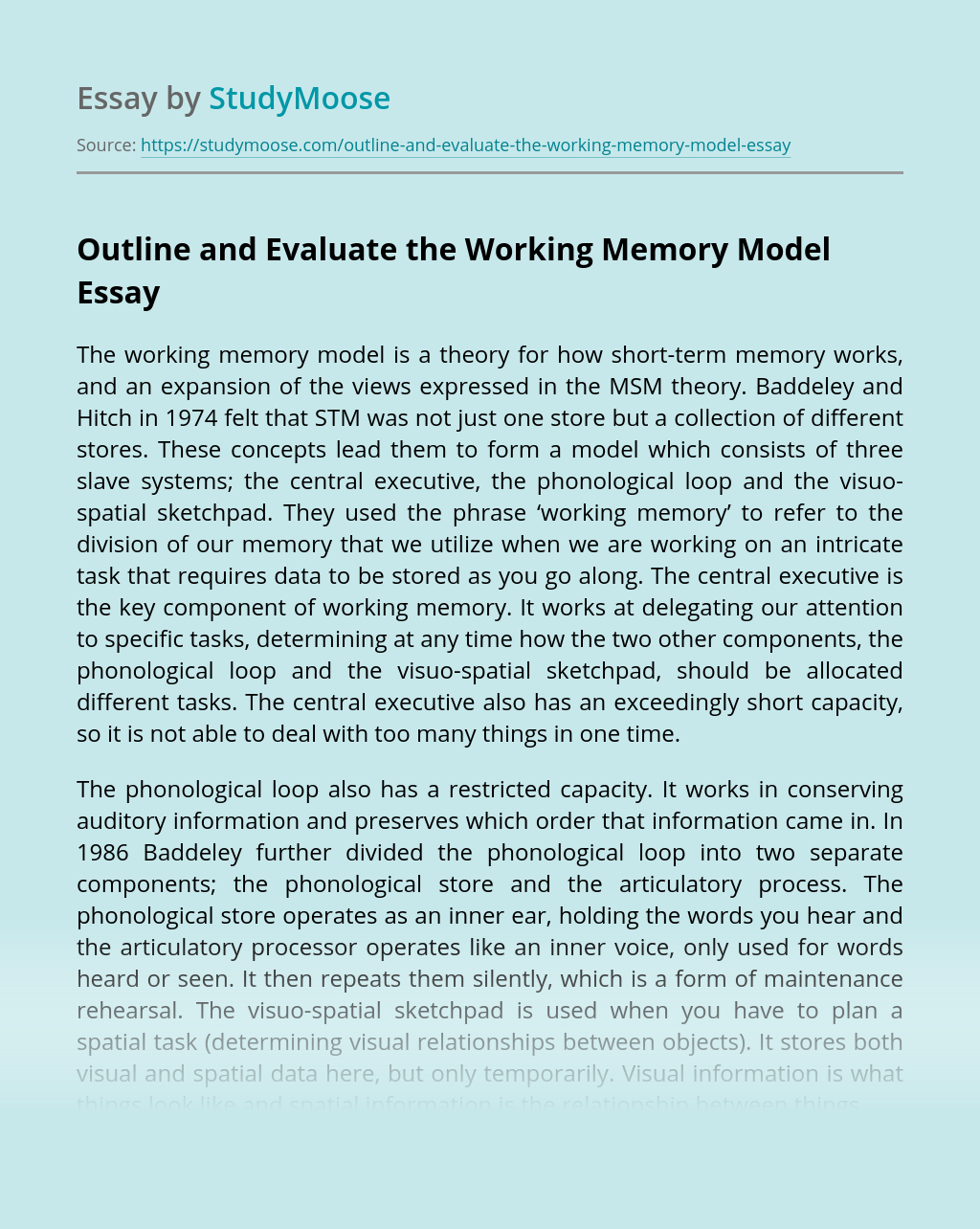 Don’t waste time
Get a verified expert to help you with Outline and Evaluate the Working Memory Model
Hire verified expert
$35.80 for a 2-page paper
Stay Safe, Stay Original