How does Steinbeck present the character of Crooks in chapter 4?

Chapter 4 of the ‘Of Mice and Men’ novella introduces a character named Crooks. Crooks isn’t shown as a main character of the story, but is given much light in this chapter. Crooks is a black man set on a 1930’s ranch, working as a stable buck. Steinbeck presents the Character of Crooks to us as he wouldn’t of been considered during the times of the ‘Great Depression’ and shows us the negative stereotypes of black people in an American 1930’s society.

Don't use plagiarized sources. Get your custom essay on
“ How does Steinbeck present the character of Crooks in chapter 4? ”
Get custom paper
NEW! smart matching with writer

Crooks is a minority character introduced in chapter 4. Page 66 reads “negro stable buck.” Crooks’ character is introduced exactly the way he would be seen by other ranch workers. Steinbeck’s intentions of presenting Crooks for the first time to us in this way, is to give us the outline of the black workers of 1930’s America. Steinbeck wanted us to instantly recognise the prejudice black people faced before we got to know his character. A white person of the 1930’s would of saw Crooks as a black worker and nothing.

Steinbeck chose to introduce Crooks’ character in the way people then would of saw him to the way we continue to see him as we learn the extent of his character.

Steinbeck gives careful detail of Crooks’ room. At the beginning of chapter 4, page 66 reads “a long box filled with straw, on which his blankets were flung.” Crooks’ bunk is described as an untidy and uncomfortable place to rest, much similar to the animal’s with whom he shares the harness room with.

The importance of Crooks’ room is to demonstrate the segregation of America in the 1930’s. As Crooks is a black man he isn’t allowed to sleep in the bunk house with the white workers. In addition, nobody considers Crooks’ disablement, when leaving him to live in these inhumane conditions because he was a black man who they saw had no standing.

Crooks’ room suggests the means of his life. The description of his room, on page 66 reads “which hung broken harness in process of being mended.” This suggests that Crooks has no separation from his working life to his personal life. Linking back to the previous point, segregation of the white men and the black men consequences Crooks to remain in the harness room where he works. Therefore, his life revolves around the four walls of his room merely swapping from his work to his rest in an uncomfortable bed.

Crooks is presented to us an intelligent man despite his race. On page 67 of chapter 4, the description states “a mauled copy of the California Civil Code 1905.” This is proof that Crooks is able to read, which suggests his intelligence, but also shows us he is aware of the rights he is entitled to as a black man. Furthermore, because Crooks knows his rights and standing, he understands that he is a minority among the ranch workers as he is the only black worker.

Crooks is a lonely character amongst the ranch workers. Nearer the beginning of the chapter, amongst Lennie’s entrance, on page 68 Crooks states “Don‘t come in a place where you‘re not wanted.” Crooks is shown being harsh to Lennie, and trying to push him away. This suggests that Crooks’ loneliness has caused him to no longer accept any kindness, whether its from a white or black man. However, because of the segregation between the black and white workers, Crooks seems to be talking to himself rather than to Lennie. This is suggested by Crooks, already being aware of the discrimination he faces by being excluded from the bunk house with the white workers, he is ’not wanted’ by them which is exactly what he says to Lennie.

Crooks comes across as defensive towards Lennie being in his room. He states on page 68, “I got a right to have a light.” He is very quick in his response to Lennie. Crooks does this because he is afraid of being hurt by anyone, holding a barrier up towards the other workers who already discriminate him. He being the ethnic minority, more than likely considers any comment to be a personal criticism of a black man’s room. This is symbolic and he declares having a light is a basic human right he is entitled to.

Lennie being mentally much less able gives the ideal opportunity to help exercise some authority in Crooks‘ life. Page 71 for instance, “S’pose George don’t come back no more. (…) What’ll you do then?” is terminative. By this stage of the chapter, there has been a power shift. Crooks is fully aware of the distress this would cause Lennie, as he would struggle to manage alone. The terminative comments are cruel and are linked to his jealousy of the companionship of George and Lennie, page 71 one quotes a “private victory” and even pleasure in some way. Steinbeck is presenting the bad streak that loneliness is drawing from Crooks, as a minority character.

Being in most ways isolated, Crooks has excitement and great curiosity due to his desperation for social interaction. In chapter 4, page 69, he questions Lennie, “You travel around’ with George don’t ya?”. Crooks is being shown as curious and nosy into Lennie’s relationship with George. However, this is suggesting more into Crooks enjoyment into having a conversation with someone other than himself, by asking questions he keeps the interaction going because he isn’t used to having company.

Crooks continues to hide his excitement upon Candy‘s arrival. Page 74 of chapter 4 sees Candy‘s entrance to Crooks‘ room, “You can come in if you want.” Crooks’ reply to Candy is less defensive than previously, as Lennie’s child-like kindness has created a domino effect. This is showing him to be much more welcoming, which suggests he doesn’t want to be obvious about his excitement. Crooks is at ease as his barrier is broken down, and his excitement is buried whilst he still craves the conversation

Crooks is faced with racial prejudice from Curley’s wife in chapter 4. For example, page 80 reads “Listen. Nigger (…) You know what I can do to you if you open your trap?” Curley’s wife brings trouble to his door, thinking she has the moral high ground, power to play god in his life. Steinbeck’s intentions were to show how being a ‘nigger’ is a human being portrayed as simply nothing, having no traits, or feelings. Crooks has no standing and is powerless as a minority. Any defence he may put forward would not even be heard, because of the racial prejudice he faces.

As the story unfolds Crooks becomes very pessimistic in his outlook towards the American dreams of Ranch Workers. Chapter 4, page 73 Crooks states “They come, an‘ they quit an‘ they go on; an‘ every damn one of ‘em’s got a little piece of land in his head.” Crooks’ views are very pessimistic but also realistic, as he has experienced dream after dream after dream that has failed. Steinbeck presents Crooks with cynical views at this point of the chapter, which supports Crooks‘ understanding that loneliness drives you to insanity.

Crooks feels nostalgic about his childhood. Page 70 shows Crooks tell Lennie “The white kids come to play at our place (…) some of them was pretty nice.” This suggests his nostalgic feelings, making him vulnerable at this stage. Willingly disclosing such a personal memory helps with our understanding of this character, he is wise and able to distinguish the fact that not all white people are racist. This is a contrasting point in the chapter, as we understand Crooks’ want for social acceptance, because during his childhood he wasn’t exposed to the racial discrimination he faces at his present day.

Crooks needs a dream to give him hope during the great depression of the 1930’s. Page 73 of chapter 4 reads “Had a strawberry patch. Had an alfalfa patch.” This shows us Crooks’ childhood of him already experiencing the land, which suggests Crooks’ understanding of the freedom of the American dream lifestyle the ranch workers want. Furthermore, the use of the repeated word ‘had’ suggests that Steinbeck has written George and Lennie’s dream in reverse through Crooks’ childhood.

Crooks character has a need for companionship due to his loneliness. Page 73 of chapter 4 sees Crooks explaining to Lennie “If some guy was with me, he could tell me I was asleep, an‘ then it would be all right.” Crooks is trying to emphasize the fact he has no reassurance when he has bad dreams or pessimistic thoughts. This shows Crooks’ character dwelling on how alone he is without anyone to talk to or interact with.

Companionship creates confidence in Crooks’ character. Page 77 shows Crooks in defence to Curley’s Wife “We don’t want no trouble.” The use of the word ’we’ shows Crooks having confidence to defend himself alongside Candy and Lennie. This shows that having companionship makes Crooks’ character more confident. Furthermore, this suggests that after Crooks lets his barrier down to Candy and Lennie, and starting to have hope, Crooks could gain companionship by achieving the American dream.

In conclusion, Steinbeck’s character of Crooks is used to convey the effects of racial oppression and loneliness for black people during 1930’s America. Using his situation on the ranch to give us a glimpse of society and the realism. Steinbeck presents Crooks on a personal level in chapter 4. He does this by letting us experience the racism and discrimination Crooks receives for being black, not so much disabled, after we get to know and understand the intelligence and extent of his character. Therefore, our emotions are heightened and we are led to feel sympathy for Crooks.

How does Steinbeck present the character of Crooks in chapter 4?. (2016, May 09). Retrieved from https://studymoose.com/how-does-steinbeck-present-the-character-of-crooks-in-chapter-4-essay 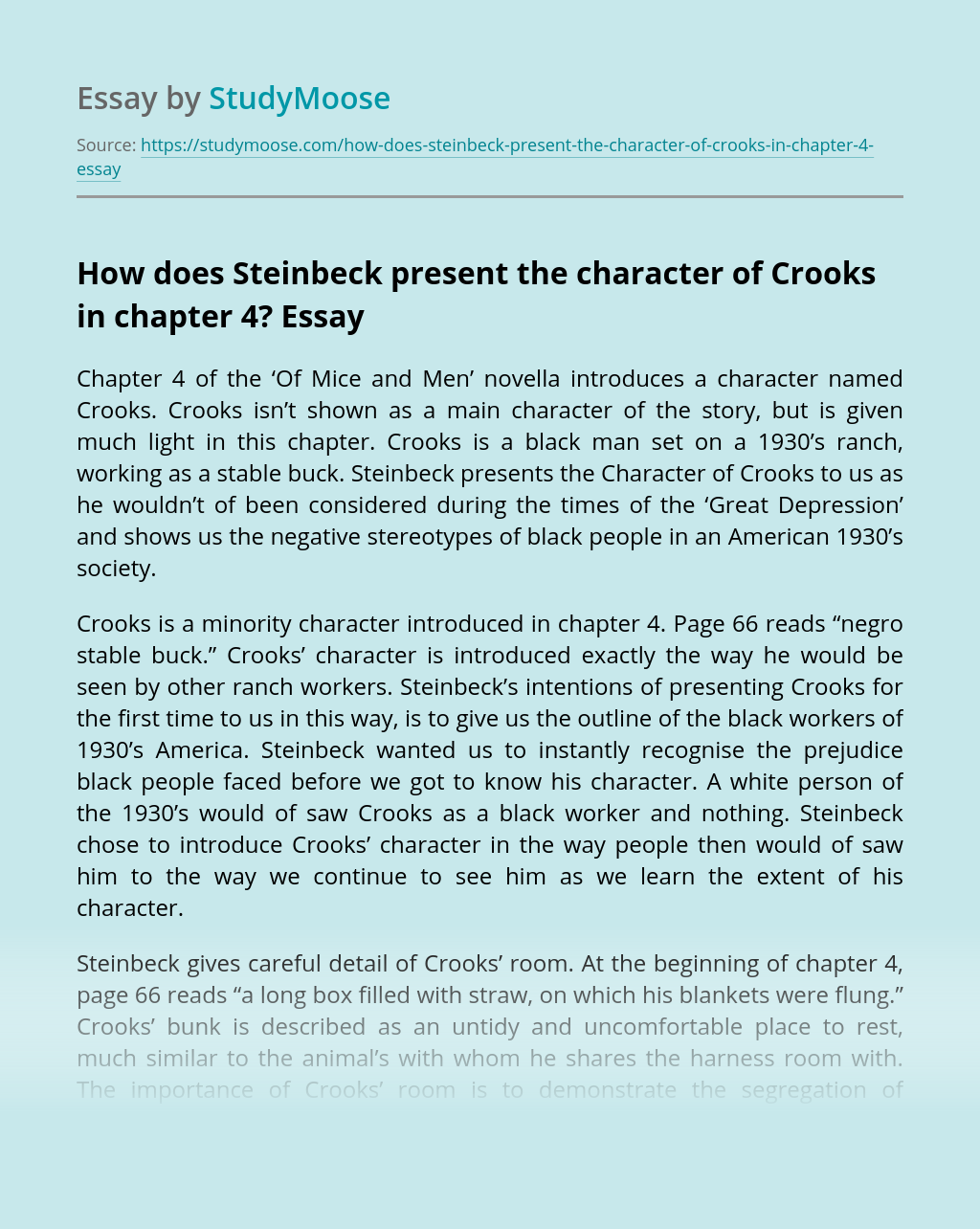